Woman Trolls Model Brother with Help From Her Toddler

A mom used her toddler to poke fun at her model bro by recreating his steamy Instagram pics – and the results are adorable. 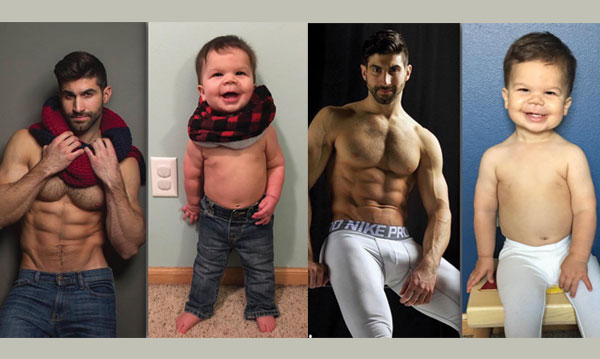 Sibling love is something unique, isn’t it?

Back in the day, it was cause for the ugly bowl cut I had to have when my sister stuck gum in my hair. And for the frozen kiddie pool filled with my sister’s clothes as retaliation.

These days, the sibling rivalry among my sisters and I is mostly dead but that doesn’t mean any of us would pass up the opportunity to tease or embarrass the crap out of one another for a laugh.

And it seems that this is a pretty common flow for most siblings – take the relationship between Aristotle Polites and his sister Katina Behm, for example.

Polites is a model and fills his Instagram with steamy half naked images that belong, as his sister says, on the cover of a romance novel. Behm has a son that has just as big an affinity for being topless as his uncle.

One day, when Behm’s son, Augie, wouldn’t button up his plaid shirt, sis realized that her brother probably had a photo very similar to this and decided to use her son to poke fun at his uncle by recreating the picture and posting it to Instagram.

Turns out, he did have a photo, so she took it and made a side-by-side comparison image of Augie and his uncle. She then sent it to her family with the caption “who wore it better.”

So far, Augie has recreated photos of his uncle drinking coffee, reading in the morning and even lounging around in his tighty whities.

Polites really enjoys watching for new images of his nephew to pop up online – and both Augie and mom also seem to really enjoy taking new shots, though mom gives the kid a break when he’s not feeling it.

And that’s what is really fantastic about this mom’s project.

Sure, the Instagram feed is great (I mean, a ripped and good looking model and an adorable toddler, what isn’t there to love about it?) but it’s really the obvious bond between sister and brother, coupled with the over-the-top memories mom is making with Augie, that makes this story of social media stardom a true Oh Mother moment.

What do you think of Augie’s Instagram debut? And do you and your siblings have a healthy sibling rivalry? Let us know in the comments below.