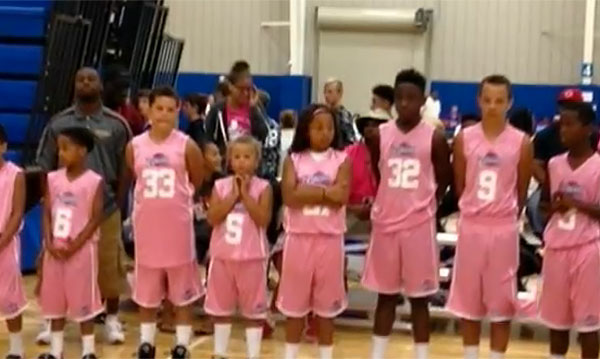 A youth basketball team from Virginia was recently stopped from taking part in a championship tournament because a girl is on their team.

The 10-year-old girl, Kymora Johnson, joined the all-boys Charlottesville Cavaliers when she was 5 because no girls’ team was available. She even took part in the same tournament, the National Travel Basketball Association Championship Tournament, for the past three years without issue, WBKO reports.

But things changed when the team traveled to Myrtle Beach for this year’s tournament. After playing five games in the tournament, the team was told they couldn’t head to the semi-final round after all because they had a girl on the team.

“So what we have a girl on the team? If she can compete with these boys, as she’s done since she was 5 years old, and drop threes and break ankles, then who are you to tell her she can’t play with them,” the girl’s mother, Jessica Thomas-Johnson, tells the TV station.

The young athlete said in the interview that she was “in shock” at her team being disqualified and wished that she could have at least sat out while they played.

“I like competing and playing against other people, and challenging myself to get better,” she tells the station about her love for basketball.

Unfortunately for this girl, though, getting better at her sport might have made things more difficult for her. According to some reports, a case of poor sportsmanship on the part of a competing team may have prompted the problem to begin with. A team the Charlottesville Cavaliers had played and beat earlier in the tournament apparently complained about Johnson being on the team, which led tournament officials to disqualify the Cavaliers, WBKO reports.

If that’s the case, we can’t help but wonder what sort of coach would have such sour grapes about losing that they’d complain about a girl being on the winning team.

No matter who complained, the leaders in charge of the tournament are surely to blame for disqualifying the team. Even if the rules state that a girl can’t play on a boys team and vice versa, the association set a precedent three years ago by allowing the team to play the first time.

And according to Johnson’s mother, the association specifically allowed her daughter to play the day of the recent tournament.

“Even if it was buried in the rules and we missed it, they accepted her at check-in with her spiral curly hair (worn) down, hot pink nail polish, birth certificate, and DMV-issued ID,” Thomas-Johnson tells Yahoo Parenting.

Tournament officials claim the rules were made clear to the team but the coach played the girl anyway.

“This was a very clear-cut situation. The head coach was informed at team check-in that girls are not allowed to play on boys’ teams for our national championship, as we offer the girls a national championship as well,” a representative from the association tells Yahoo Parenting. “Unfortunately, the coach chose to play this girl anyway, and therefore by our rules and policies the team was dismissed from the tournament because he played with an ineligible player.”

But what about the other years Johnson took part in the tournament? And even when the so-called rule-breaking was discovered, why punish the kids who worked hard to make it to the championship for something they had no control over? These are kids. Let them play.

The association also apparently showed its lack of judgment when the team showed up in pink uniforms the next day of the tournament as a “silent protest,” Yahoo Parenting reports.

“(The NTBA) called the police, like these 10-year-olds were such a threat,” Thomas-Johnson tells Yahoo. “But not one parent or child has directed their anger at us. It just really solidifies the feeling of family that we already had with the organization.”

What do you think of this situation? Was it right to disqualify the team? Tell us in the comments.