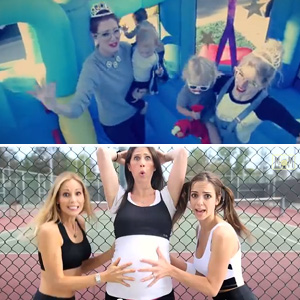 Iggy Azalea might be fancy, but she's got nothing on these moms. Three separate YouTube channels run by ladies with kids – The Girls With Glasses, What's Up Moms and My Life Suckers – have recently uploaded parody videos of the rapper's popular song "Fancy" – videos that have given Iggy's hit a run for its money.

The trio of funny flicks – "I'm Not Fancy," "I'm So Pregnant" and "I'm So Cranky" – rap out all of the frustrations and hardships that come with being a mom, with plenty of humor, to the rhythm of the chart-topping song.

"I'm Not Fancy" by The Girls With Glasses tells tales of dinnertime disasters, daunting diaper changes and decline of hanging out with adults:

Don't say 'retarded,' 'dumb' or 'I farted'
Kids hangin' on me, I can't shop at no department-
Can't get anywhere on time, my social life has declined

After depicting the not-so-glamorous side of motherhood, the song does a 180 in the chorus:

I've got family,
That's better then gold
Not in the game
But I wouldn't let this go

The second, "I'm So Pregnant" – leading the pack a whopping 10 million views – features some of the original video's dance moves performed by a pregnant woman, and is even complimented by Azalea herself – or so YouTube commenters claim.

Takin' prenatals straight; never chase that
Put on Frozen – where my nap at?
Acid reflux, you should taste that

Fast forward to a few years after pregnancy, and you have the premise for "I'm So Cranky," which sings about the messes and antics of toddlers and older kids.

These sharp videos make light of the sticky situations parents often find themselves in – and really seem to resonate with the YouTube crowd.

One user, Scent With Love, By Kande responded to "I'm Not Fancy" saying, "Oh, my gosh, I LOVE this so much! Thought I'd be fancy this weekend in a dainty white dress and red lips, then laughed at myself as I'm leaning over a public restroom cleaning my 3-year-old's poop off the floor due to bad aim. … Huge fan."

Since their releases in June, the videos, all together, have reeled some 11.5 million views. Which is your favorite?