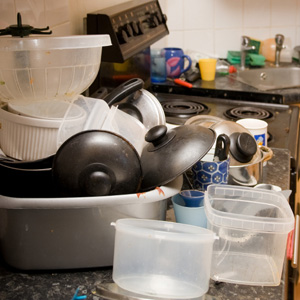 Hoarding is a disease that affects 3 million Americans. When is it "pure laziness" – and when is it a real mental problem? And if a 10-year-old child is a victim, does that change the argument?

Township officials recently searched an Ypsilanti home because neighbors complained about the smell (and, some reports say, rats) coming from the house. What they found was quite disturbing. What could be a house fit for the TV show Hoarders was home to a 10-year-old girl and her mother, plus three dogs and a cat. It was filled with animal and human feces, local WXYZ TV noted, and there was no running water. It's reported that the young mom and child lived there, using the bathtub, floor and jugs for the bathroom.

According to the Detroit Free Press, the whereabouts of the mother and child are unknown, but it is believed that the child is still under the parental care of the mother. The downright disgusting pictures of the house – which depict heaps of garbage spilling out of sinks and down stairs and a filth-encrusted toilet and refrigerator, to name a few startling images – have metro Detroiters all over voicing their concerns about the welfare of the child.

This house is one of two in Ypsilanti slated to come down because of the extreme uninhabitable conditions they are in. But what makes this house different from the other is that a child was involved – and, it seems, is still involved.

While there's debate over whether this is a case of "laziness" or hoarding, it's helpful to understand the symptoms of hoarding – so the individual and people involved can receive appropriate help. According to the Mayo Clinic, common traits of hoarders include, but are not limited to: Cluttered living spaces, inability to discard items, keeping stacks of newspapers, magazines or junk mail and moving items from one pile to another without discarding anything. There are also tendencies to acquire unneeded or seemingly useless items (including trash or napkins from a restaurant), difficulty managing daily activities (like procrastination and trouble making decisions) and difficulty organizing items – plus shame or embarrassment, excessive attachment to possessions and limited or no social interactions.

Neighbors reportedly stated that the mother and the child were seldom seen, and were always closed up in the house. Nearby residents also said they would have called officials earlier had they not been scared to cause problems with the family. So there's a chance this could have been stopped sooner – which could have expedited the process of getting the child better care.

This could very well be a case of hoarding. But the bottom line is, it really doesn't matter. A child is still under the parental care of a mother who let her daughter live in filth and squalor that no human – or any living creature, for that matter – should have to bear.