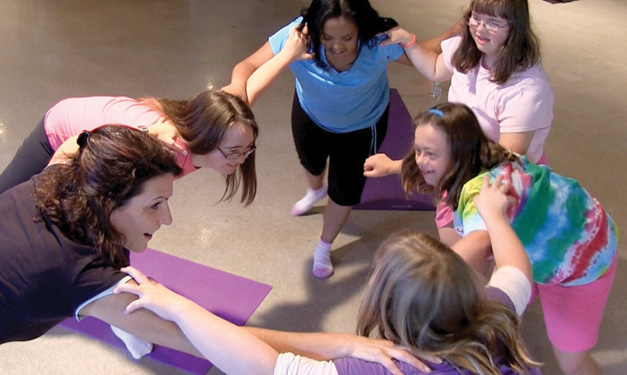 Special needs kids – and stressed parents – are taking yoga lessons from mobile yoga studio Belightful Yoga, based in Royal Oak and serving southeast Michigan, to calm down and find a better balance in life.

Lisa Ballo started doing yoga about 25 years ago to relieve her body from the tension caused by her job in the ad industry. Soon, she realized it had a big positive impact. “It brought me to that place of calmness,” she says. Wanting to help others, she decided to start teaching yoga – and developed a passion for working with kids.

Since 2010, Belightful Yoga has taken classes on the road. The studio works with kids ages 5-plus with all levels of abilities. Teachers are specially trained to work with children with Down syndrome and autism. “I wanted to help bring that wellness culture on site,” Ballo says. “There was a need for me to bring it to people of a younger age, because that was a tool that I wish I had.”

Larger groups do require parental participation – and that's a good thing, Ballo says. Moms and dads are able to see and hear the techniques, visual aids and affirmations the instructors use in class, allowing them to learn and use these tools in daily life.

"A lot of it honestly is the self-esteem," adds Ballo. "It's the poses, but also the affirmations."

Additional advantages include improved motor planning and performance, increased attention span and gains in self-regulation – all through regular practice.

As if that's not enough, social skills tend to blossom, too. Some students meet before or after class for a snack and chat about class and what they learned.

Mom Suzanne Thomas, 38, of Clinton Township takes her son, Luciano Spagnolo, 13, who has autism, to these sessions as much as possible. She feels it's a good break from all the academic work Luciano focuses on during school and therapy sessions. She enjoys exercising with him, too.

"I actually liked it was something we could do together," Thomas says.

The National Kids Yoga Conference, happening Sept. 27, 2014, in Washington, D.C., will gather national leaders from across the country who, like Ballo, are involved with youth yoga. They’ll share tools and ways to expand the movement. Ballo’s looking forward to speaking and sharing her knowledge with others. Find more on the website.

Call 248-560-7744 or visit the website to see where Ballo’s classes will be next. Prices, times and locales vary. Want to schedule something? Get in touch, Ballo says; they’re flexible and happy to set up something for you.

Note: Some reporting on this story was done in March 2013. Updates were made to the article in August 2014.

Today’s kids can start mapping out their career path as early as preschool. Here, a Macomb County expert offers insight on how you can take an active role in the development of your child’s future plans.
Read more
Special Needs