Chickens and Autism: How ‘Goldie’ Helps a Michigan Teen 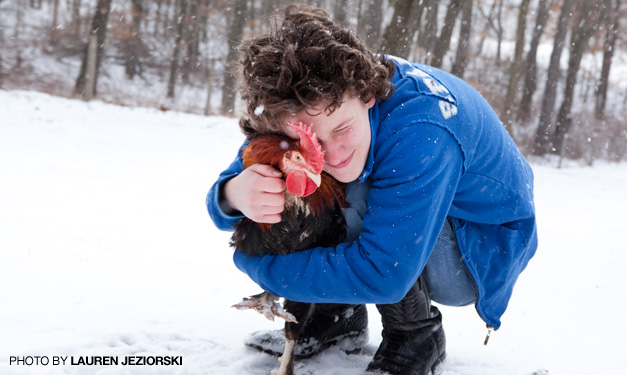 Alair Bergman’s best friend is calm, patient and an excellent listener. Her pal doesn’t judge and is there whenever needed.

But there’s one catch: Alair’s confidant is a chicken.

Learn more about Alair Bergman’s book, My Best Friend Goldie, at her family’s website. Buy her book at on createspace.com or Amazon.com.

Since 2006, Goldie, along with dozens of other chickens, roosters and a few ducks, have helped the 17-year-old cope with autism. Alair was born with multiple challenges and learning disabilities, also including obsessive compulsive disorder, sensory integration dysfunction and auditory processing disorder.

“Some people would just verbally tell me to calm down, and they don’t show me any way how,” says Alair, who lives in Ortonville. “It’s like telling somebody to build a rocket, but no blueprint or hands-on help.”

But a miracle happened in Alair’s life when she found an unusual talent in working with birds. A trip to Greenfield Village as a child helped open the window to the power of animals. She took to them – especially the chickens, and they to her. It was a revelation.

“When she was outside and with animals, she was calmer,” says Alair’s mom, Sharon. “We now had something to focus on. She had periods of time she was happy. And when she got into those periods where it was dark or hard, reacting to everything in the world and having tantrums and meltdowns, she could go and sit with Goldie. She would immediately calm down.”

In 2006, Alair purchased a 5-month-old Goldie for $8. The name came easy, she says, due to the hen’s golden feathers with white and black spots. The pattern is called a millefleur, which means “a thousand flowers.” Goldie’s breed is a Belgian Bearded d’Uccle.

The two were inseparable. They talked and talked. They watched TV together, Goldie sitting on Alair’s shoulders. They played in the yard. The hen became a true best friend.

For Alair, poultry has a variety of benefits. The birds are smaller and more controllable than other livestock, she says. And they’re hypoallergenic (she’s allergic to anything with fur). By nature, chickens are skittish. This aspect actually helps her.

“You have to have a calm attitude,” she says. “I was always a very hyper and loud little kid. Chickens taught me to be more quiet and calm around them, so they wouldn’t be so skittish.”

Goldie’s influence prompted Alair to put her experiences with autism on paper. At the age of 12, with mom’s help, she penned her first book, titled, My Best Friend Goldie. The book wasn’t officially released until last year and came about with support from a famous autism advocate.

In 2010, mom and daughter met Dr. Temple Grandin at Metro Parent’s Living With Autism Workshop. Grandin, a prominent author and speaker on autism, didn’t talk until she was 3 1/2, communicating her frustration instead by screaming, peeping and humming. In 1950, Grandin was diagnosed with autism – and her parents were told she should be institutionalized.

Since that grim prognosis, she has become a professor of animal science at Colorado State University. Grandin also speaks around the world on both autism and cattle handling, which she helped revolutionize as a livestock-handling equipment designer.

Meeting Grandin gave Alair the push to publish. Grandin even gave it an endorsement.

“Alair took one of her project books to the conference because she had read Temple’s books,” Sharon says. “Alair signed it and gave it to Temple. At (the conference’s) lunch, Temple held it up and said, ‘I would endorse a book like this.'”

And Grandin did just that.

But life hasn’t been easy for the Bergmans.

In 2010, they were evicted from their home in Waterford. Last year, they had to leave their farm a few miles from where they’re currently renting in Ortonville because their landlord liquidated the property for various reasons. In another two months, they’ll have to find another place to live. The family they’re renting from will be returning from Australia.

And if all this wasn’t hard enough, mom was diagnosed in 2010 with stage 3 breast cancer. She underwent chemotherapy and eventually had a modified radical mastectomy. She’s currently in remission.

“This kid shines in crisis,” Sharon says. “We got to Oakland County Fair in 2010 and she wins overall county championship for the second time … right after our major crisis.”

Alair hopes to sell enough copies of the book to buy her family a new farm.

Besides writing the book, she says her biggest triumphs come from getting rid of a lot of the autistic traits that held her back. Her stubbornness and processing concepts have become much better since working with her animals.

“But I still struggle with it,” she says. “I still have struggles getting things done and persevering.”

Involvement with the 4-H Youth Development Organization, which she joined at 9 years old, helps her persevere. The organization’s motto –”Head, Heart, Hands and Health” – connected with the family.

Both Alair and her mom credit the club with helping them through autism. The idea of working with animals attracted the family – Alair’s 14-year-old brother, Robbie, also has autism and other learning disabilities. He prefers goats, which helps him out, too. He recently became involved with chickens.

The first year Alair joined 4-H, she was a “newbie.” She didn’t know you had to have a purebred chicken, not a mix of different breeds. She wasn’t very good at other intricacies, she says, but it was still a good experience.

The Bergmans are thankful for the national organization’s saving graces. If it wasn’t for 4-H, mom says her daughter might not have progressed. The club helped the formerly non-social girl learn good social skills and break out of her introverted personality.

“It helped me be out with the community and help it,” Alair says. “At 15, I had already become something of a mentor to the younger generation of poultry, teaching kids about chickens. I still do that.”

“It’s all about you, the bird, how you’re both connected and how well you can work together,” Alair says.

In addition to animals, neurofeedback helps. The process uses a computer interface to detect brain activity. It teaches the brain to change itself and helps improve alertness, attention, emotional regulation, behavior, cognitive function and mental flexibility. Sharon, a neurofeedback therapist with a background in psychology, runs the program from her laptop.

“During my early ears in 4-H, neurofeedback got me through a lot of troubles,” Alair says. “At the end of a very stressful day, it would calm me down, so I could sleep and process well the next day.”

In neurofeedback, electrodes are attached to the skull and pick up electrical brain waves. The data is then sent to a computer and gives audio and visual feedback when a person emits positive or negative brain waves. The goal is to encourage positive brain function.

For example, one visualization is a lava lamp (her favorite). The more positive Alair’s brain waves become, the higher the lava lamp bubbles rise. “Pachelbel’s Canon in D” also plays. Alair jokes that she enjoys forcing herself into different emotions to see how it affects the brain scan.
It makes perfect sense for the girl who now loves to participate in drama and acting.

“I like being somebody you’re not, getting up on stage, having fun and acting out different parts,” she says. “I love the costumes. I love making the costumes, sewing and crafting.” One costume she designed and made was a blue fox, with a perfectly detailed head and paws. Alair also paints and draws – she sketched all the book’s artwork.

In the near future, Alair wants to get a job so she can earn money and purchase her own things. She’s thinking about being a sandwich maker at Jimmy John’s. One day, she wants to have her own farm. She’s “not one for cramped city corners,” and loves the space, the outdoors and, of course, her birds.

But poultry farming will remain a hobby, the family says, because breeding the chickens to sell as pets won’t bring in much cash. The only way money could be made is if the birds were sold for eggs or meat. And that’s not going to happen. Not to her friends.

Besides, Alair has other talents to explore.

Last September, she picked up the violin for the first time. Another milestone. For most of her life, she couldn’t tolerate audio, music or high-pitched noises. On a recent day in March, with a rooster named Jacob clucking in the background of their living room, she played a few pieces of music. It’s just one of her many gifts, now able to shine through the healing of her autism.

“She has a lot of talents,” Sharon says. “One of the things we’ve thought of that might be a career direction is being a professional storyteller. It blends all the drama, the costuming, the animals and everything. She can spin a really good story.”

Throughout it all, Alair continues to grow.

“She said to me about a year ago, ‘Mom, I don’t want my best friend to be a chicken anymore,’ which is great,” her mother says. “And I let her know that best friends don’t go away. Goldie can still be your best friend, but she has kids that are her best friends now.”