Dads Dealing with a Special Needs Diagnosis in their Kids 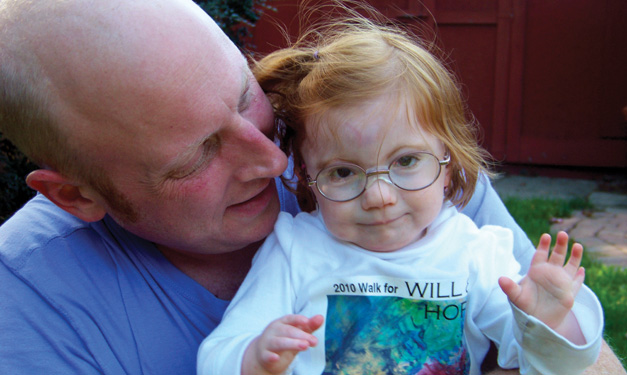 Prenatal screening tests came back normal during his wife Katie’s pregnancy. So when hours after the birth of his son Will, Bob Marzolf of Auburn Hills learned his baby had Down syndrome, he was caught by surprise.

“I remember leaving the hospital, going home and taking a shower,” he recalls. “I looked out the window across the yard and just broke down. After I had a good cry, I told myself ‘Buck up, Dude. God picked you to take care of him.'”

Marzolf and his wife are one of the approximately 5,500 couples in the United States who annually become the parents of a child with Down syndrome – a point that Greg Schell, director of the Washington State Fathers Network, frequently makes to the dads he encounters who are coming to terms with their own child’s special needs diagnosis.

“The No. 1 issue men in these circumstances report, over and over, is isolation,” says Schell, who is himself the father of a 33-year-old daughter with Down syndrome. “They feel like they’re the only person in the world going through this, which is so irrational. Thousands of people are born with disabilities every year, and they all have a dad.”

The issue, notes Schell, is that men are socialized in a very different way than women, which often leaves them less prepared to handle a child’s disability.

“Men learn from an early age that they must be tough when the chips are down,” Schell says. “They’re encouraged to ‘suck it up’ and to fix any problem that comes their way. But when they learn they have a child with special needs, they face a dilemma when they realize that even the smartest minds in the world can’t change this new reality.”

How fathers come to accept and even embrace their child’s special needs diagnosis often varies dramatically from how their spouses do. In his 30-plus years working with families of special needs kids, Schell has observed that mothers of special needs kids are much more prone to congregate, often talking for hours, comparing notes and supporting one another.

“Guys don’t do that,” Schell says. “At least not initially.” In fact, when Schell’s own daughter was born, there were no support groups for dads to be found.

Shannon Leveille, M.A., is a licensed professional counselor who works with families whose children have been diagnosed with an Autism Spectrum Disorder (ASD). She works at Judson Center in Royal Oak, an agency that provides support services to autistic children and their families, and is working to re-establish a support group for fathers.

“A dad’s group had existed at one time but sort of fizzled out,” she recalls. “We offer a lot of support to women, whether it is through moms night out, support groups or other programs. Dads, on the other hand, are left in the wings.”

“I routinely witness fathers walking out after one session feeling like a new man,” Schell says. “All that they were holding inside comes out. They realize they aren’t the only ones feeling what they feel. They feel like a human being again.”

In addition to her work at the Judson Center, Leveille counsels families of special needs children in a private outpatient mental health clinic in Novi. In recent years, she has seen the population of fathers seeking her counsel grow significantly.

“It’s finally accepted for men to be more active in a family role in general,” she notes. “Men experience the same emotions that women do when learning of a child’s special needs diagnosis. They just don’t show it.”

For his part, Marzolf found that connecting with his childhood friend, whose own daughter had Down syndrome, was a huge source of support to him in the early days after Will’s diagnosis.

“We went and visited my friend’s family,” Marzolf recalls. “He told us it would be one of the hardest things to go through but also extremely rewarding. We saw his then 6-year-old daughter full of life and personality, and it changed our perception of how living with a child with Down syndrome would be.”

Now Marzolf and his wife do the same for other couples experiencing similar circumstances.

“We’ve welcomed a few couples into our home who were expecting a child with Down syndrome,” Marzolf says. “They see Will and what a cool little guy he is. He’s full of life and love. We let them know they can get through this.”

Marzolf notes that, if anything, he and his wife were brought closer together by the experience of Will’s diagnosis, and he never felt the need to seek professional help. “We were on the same page quickly,” he says. “We figured this is what we had to do, so let’s do it.”

Joel Kurth of St. Clair Shores had never heard of Cornelia de Lange Syndrome (CdLS), a genetic disorder that causes a range of physical, cognitive and medical challenges, until it was mentioned as a possibility the day after his son Will’s birth in October 2004. The diagnosis was not confirmed until almost two months later, when Will was still in the hospital battling one health crisis after another.

“The diagnosis was really secondary at that point to his immediate needs,” Kurth says. “He was on a ventilator experiencing constant difficulty breathing. We knew if he survived, he would face significant challenges and would likely be cognitively impaired. It was devastating.”

To help cope, Joel chronicled Will’s journey via a blog he and his wife, Maureen, created to keep family and friends updated.

More on the next page

“We’re both journalists, so writing was something we naturally gravitated to,” says Kurth, who is city hall editor at The Detroit News. “It was a way to vent, ruminate and sort through a jumble of emotions.”

Will lived for 89 days, and Kurth blogged his son’s journey through Will’s last day. But Kurth found himself blogging again when, hours after his daughter Hope was born three years later, it was confirmed that she too had CdLS.

“Mo took one look at our daughter and knew she had CdLS,” Kurth recalls. “But I didn’t see it right away. I was in denial. When her diagnosis was later confirmed, I thought it certainly wasn’t ideal, but we knew we could do this.”

Aptly titled “Journey of Hope,” the family’s second blog contains many more entries than Hope’s older brother’s blog. Hope is thriving at home with her parents and little brother Oscar.

In addition to blogging about Hope’s progress, Kurth and his wife have found comfort in twice organizing the “Walk for Will and Hope” to raise money for the CdLS Foundation.

“I’m glad we could do this for Will,” Kurth says. “We’re spreading the word about CdLS and showing that his life has meaning beyond our family.”

While coping mechanisms are as varied as the people who ex
perience them, Schell notes that most men will experience four feelings when coming to terms with their child’s diagnosis though not necessarily in the same order or on the same timeline.

According to Schell, the first feeling is a stress that can be so severe as to lead to depression.

“Men often question whether they have the skills to handle a special needs child,” Schell explains. “They don’t know how they’ll adjust.”

The second feeling is that of isolation, and the third is anger, he says.

“The anger is often focused at systems,” Schell explains. “For example, men may channel their anger at schools, doctors, insurance companies or legislators. Issues that are typical for most families get amped up and distorted for families with a special needs child.”

And the fourth? Guilt. “Men will say things to themselves like the doctor screwed up, and I wasn’t there to protect my child,” Schell explains. “Or they’ll blame themselves for something like trying drugs in college.”

Compounding these feelings may be a sense of extreme pressure to provide for one’s family, Leveille says. She regularly observes that when a child is diagnosed with an ASD, one parent usually opts to stay home with the child – and usually that parent is the mother. As a result, fathers tend to become career-focused as they move into the position of the family’s sole breadwinner.

“Men in general feel pressured to be the provider,” Leveille says. “That factor doubles and sometimes triples when there’s a child with a disability. Mom doesn’t work, and dad sees the added expense of treatments for the child adding up.”

Leveille has also noticed that men sometimes tend to deny a diagnosis or its severity. “In my experience, women tend to see the autism spectrum more easily. For men, if their child is not on the extreme end of the spectrum, it may be harder for them to accept. Men see in absolutes when autism is anything but.”

Leveille notes that she doesn’t counsel men differently than she does women – despite the differences in how they may come to terms with the diagnosis.

“I counsel couples where they’re at,” she explains. “I try to present an environment where men feel supported, so they feel comfortable talking.”

At 7 years old, Will Marzolf is thriving at Deerfield Elementary in the Avondale School District, where he is primarily in the special needs but spends at least an hour a day in the general education program. To his dad, Will’s the apple of his father’s eye.

Kurth is similar in his sentiments toward 3-year-old Hope.

“CdLS is a scary diagnosis, but it has been a real joy to see her develop,” he says. “The circumstances are different with special needs kids, but the underlying love is the same.”

Similarly, when Schell thinks back to when he first learned of his daughter’s Down syndrome diagnosis, he recalls having a very difficult time adjusting.

“So many things go through your head,” he says. “And it was several years before I was back on my game and could focus on other aspects of my life.

“But thankfully not too long after my daughter was born, she started showing me that life can be fun – that there’s a different way. I remember thinking that I always wanted to live a different life, and that perhaps this was going to be how.”