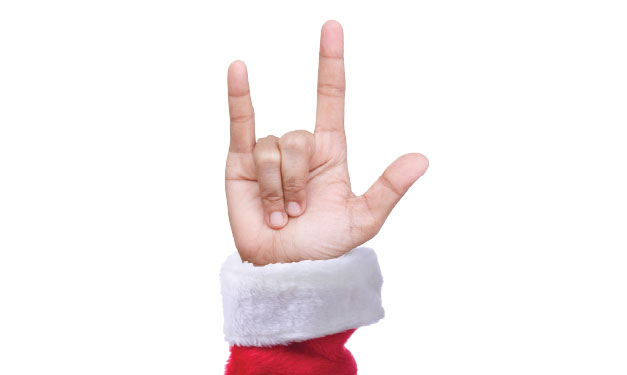 One very special Kris Kringle has a gift for local children who can't hear: sign language. Deaf Santa listens to all kids' holiday wish lists in metro Detroit – and beyond.

He's the invention of Scott Powers. This Rochester Hills resident lost his hearing himself at age 5 due to spinal meningitis, and learned sign language in ninth grade. Powers began playing Santa in 2010 and soon found his calling at a deaf bowling league fundraiser.

"A deaf child approached me and asked, 'Santa, are you deaf or hearing?' I responded, 'I'm deaf just like you,'" Powers told Metro Parent in an email interview. "I simply loved the reaction she had when she learned that."

Deaf Santa was officially created in 2012. Powers now visits kids at a variety of southeast Michigan venues. His website has a schedule of where Deaf Santa will make public appearances during the November and December holiday months.

"I believe deaf children should have a Santa that they can relate with and communicate with," he says. "Deaf children need to constantly be around other deaf role models to inspire and motivate them."

But, in true Santa fashion, Powers never turns away any child. If a hearing kid visits, he lip-reads or has an elf help. Most hearing kids are very accepting, too; he says he once even had a little girl praise him with a candy bar and say, "Way to go, Deaf Santa!"

At his public events, Deaf Santa offers the option to have a photo taken. These cost $10 and include a stocking with crayons and a coloring book. A portion is donated to charity.

You can learn more about Deaf Santa at his website, which is deafsanta.com.

Summer rite of passage or a scary proposition? For many parents, including this local mom, it's a toss up. Read on for the pros, cons and many perspectives.
Read more
Outdoors

Wary of indoor dining but tired of eating at home? Consider a meal at one of these local spots that offer outdoor dining in the winter.
Read more
Attractions