Easter Seals Story: Connecting and Communicating with My Son 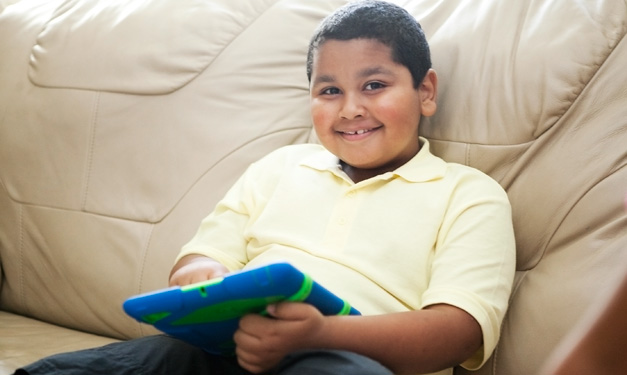 At school, Daniel knows no strangers," explains his mom Danielle C. Dallo of her son who's now a second-grader in Southfield. "He gives everyone high fives from the principal to the janitors. Everyone knows who Daniel is and he knows everyone." But getting to the point where Daniel knows and interacts with those around him hasn't been an easy journey.

When Daniel was just a baby his mother began noticing that he didn't seem to respond to her voice or touch. "It seemed like he just wasn't paying attention," Dallo recalls. But when Dallo's second child, a daughter, was born about a year and a half later, she knew something had to be wrong. Dallo saw her daughter developing in ways her son never had. He had yet to utter any words. Not even "mama" or "bye-bye."

At 2½ years old Daniel began receiving early intervention treatment through the school district. Dallo lists off the treatments for Daniel, whose condition at that point had been ruled as developmental delays. "Let's see, there was OT, PT and ST," which Dallo explains stands for occupation therapy, physical therapy, and speech therapy. In his second year of intervention services through the school Daniel was diagnosed with autism and the school suggested that Dallo give Easter Seals a call.

"I don't mind sharing with people that when I found out about Daniel's diagnosis, it was so hard," says Dallo. "I didn't know any other parents with kids with autism. Most people just didn't talk about it. I did a lot of research on my own." Dallo says she didn't know how to help her son during those early days when a trip to Target could lead to a meltdown. "It could be anything that would set him off – the lights in the store, the smells, the people," says Dallo, who recalls having to abandon her cart and leave the store to help her son settle down.

As part of Easter Seals services for early intervention with children on the autism spectrum, Daniel began participating in the P.L.A.Y. Project™. P.L.A.Y. stands for Play and Language for Autistic Youngsters and involves a Home Consultant from Easter Seals coming to the family's home on a regular basis. During these in-home visits, the specialist teaches the family how to interact with their child, giving them simple ideas and tips. He or she will also videotape the family during each visits and offer positive feedback and tips for improvement and educating parents of where their child is functioning.

"The P.L.A.Y. Project focuses on the social and emotional development of children with autism, which is the biggest deficit for a lot of kids on the spectrum," explains Kathie Klingensmith, the Children's Developmental Therapies and Services Supervisor for Easter Seals Michigan. "They struggle to make connections within their family, with their parents. We try to alter the way parents interact with their children to improve those relationships."

Klingensmith – or Miss Kathie – as many of her families know her, has worked with the Dallo family since Daniel first began receiving services through Easter Seals. Many children with autism have holes in their development. "We try to fill in those holes," says Klingensmith.

Pointing, using pictures, and other forms of communication can stand in for words. "Unless they have motor difficulties, for many kids the language naturally begins to come out when we start working with them," she adds.

Klingensmith teaches parents how to interact with their child on the autism spectrum by helping them understand their child's perspective. "We have lots of different techniques that can help educate parents as to how their child sees the world," she says.

One of these techniques is simply observing what fascinates your child and then trying to start a dialogue about it. "What does the child do over and over again?" says Klingensmith. For example, if they like to see a wheel go around and around, watch it with them. Then comment on what you see, talk about how it affects you, how it makes you feel. "By talking about what they're seeing, you're helping them have an understanding about their world." She notes that these conversations, even if they may seem one-sided, help a child grasp how experiences fit in a larger picture. "But it should also be fun!" reminds Klingensmith.

"The P.L.A.Y. Project has just given us ideas about how to engage Daniel," says Dallo. A manual customized for her family on how to help her son has been particularly valuable, she says. Through her family's time in the program she's seen a change come not over just Daniel, but also their family.

"Before, he didn't play with us and he didn't talk to us," remembers Dallo. "But we've learned to let him lead the play and then we join in. Now we're playing with him and having fun with him, not just standing around. We're actually playing together as a family."

Having feedback and ideas on tapping into Daniel's world has been key to making greater strides. Daniel shares many of the same interests as his peers. He's an avid Thomas the Train fan and loves watching episodes of The Octonauts. Swinging and playing soccer are two of his favorite outdoor activities. And Play-Doh is his ultimate reward – preferred over just about anything else.

But unlike his peers, his schedule never changes, ever. He gets up early and goes to bed early, usually rising between 4 or 5 a.m. and turning in around 7:30 p.m. "Once he's up, he's going strong the minute his feet hit the floor," laughs his mom. "He doesn't take naps either. Never has."

With work from Easter Seals and his parents, his language skills have grown over time.

"When Daniel started the P.L.A.Y. Project, he didn't speak. Not one word," says Dallo. "He had been taught a few things in early interventions. He could do some signing. But I'd never heard him say, 'Mommy,' 'Daddy,' 'Goodbye,' or 'I love you.'"

Those words slowly began coming as Dallo learned how to interact with Daniel.

"I still remember the first time he went to school and he turned and said, 'Goodbye, Mom.' He was 4." Dallo said goodbye to Daniel and then went to her car where she recalls, "I just sat there and broke down in the parking lot and cried. I'd waited so long to hear him say those words."

Today, Dallo is confident that her son will continue to develop, especially with the help of
Easter Seals and Miss Kathie. "I can really say 100 percent that the ideas Kathie gave me made all the difference."

Halloween on the spectrum

For kids on the autism spectrum, Halloween can be especially challenging. Many of the traditions – like getting together in big groups and having unfamiliar foods – can be difficult for them. Kathie Klingensmith, Children's Developmental Therapies and Services Supervisor for Easter Seals Michigan, and Danielle C. Dallo, a parent of a child on the autism spectrum, share their thoughts and tips: