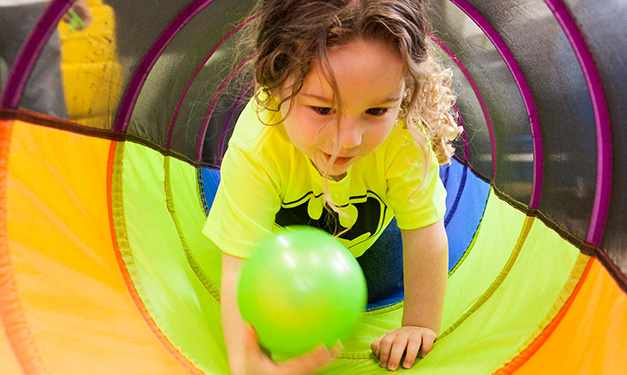 Angela Terry was nervous about her son Laten's first appointment for therapy at Easter Seals. Before his diagnosis of autism spectrum disorder at almost 3 years of age, Laten had gone to speech therapy through another service. The experience had lead to frustration for Laten and tears for Terry. "It took seven months just to get him to sit in a chair for his speech therapy," explains the White Lake mom. "I was worried it was going to be like that again. It just didn't work for him."

Instead, Terry found that the Easter Seals staff identified with Laten and tried to take his lead in how to guide him toward various learning skills. "When I first took him there for the evaluation, I just thought, 'I don't have to explain him to them. They understand him.'" Through an early intervention program coupled with applied behavior analysis (ABA) therapy, Laten's behavior improved.

Looking for assistance for your child? Find an Easter Seals location near you.

ABA training involves pinpointing what motivates children, so they are willing participate in their training sessions. "I think many of the kids are motivated by food, but not Laten," notes Terry. "It took the staff a while to figure out what clicked for him, but they found it with buttons." When Laten needs a break during therapy, he can tap a red button on a piece of paper and then run around the table. He then comes back and continues his work. "I know it sounds like something small, but it's really amazing that he's able to sit and work for so long now," says his mom. "I think he feels like he is more a part of the therapy this way."

When Laten first came to Easter Seals in September 2013, he was evaluated for various learning skills on a scale of 1 to 5. He scored 1's across the board. Since then he's been going to ABA therapy three hours a day, five days a week. Recently, his evaluations have been coming back with 3's to 5's. Terry has noticed the change at home, too – even with little things. Laten never used to really play with toys or react when he and his mom read books together. Now Laten is starting to ask for Buzz Lightyear and he's pointing out colors in picture books.

Easter Seals also determines whether the child could benefit from other services, such as speech and occupational therapy for sensory processing disorders, which are common in children with autism. These services can be provided at a clinic or at home. "Easter Seals Autism Services recognizes that every child is different and matches our treatment style to the child," says Stephens.

Terry likes to call the approach, "Team Laten," since there are several people involved in her son's care. Terry, and her husband, Mike, are a big part of that team. They receive training through ABA, too, so they can reinforce what Laten's learning in therapy at home. "It's been amazing to see Laten's improvements," says Terry. "He's a different kid than he was back in September."

Get ready to have the best spring break ever with these creative trips and fun activities.
Read more
Attractions