Finding a ‘Special’ Place of Worship

Many churches, synagogues and mosques are working to welcome and include children with special needs in in their congregations. 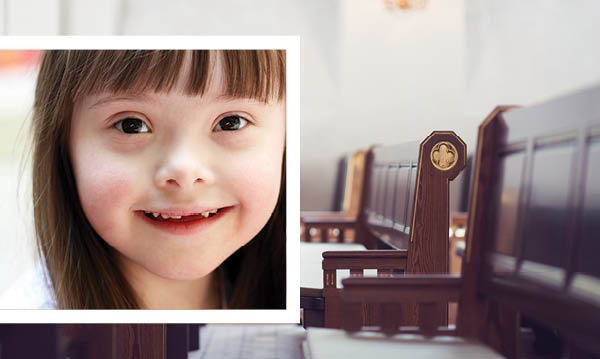 It’s Sunday morning at Sacred Heart Byzantine Catholic Church in Livonia, and Karen Wang and her sons claim their usual seats in the front row. Wang always comes to church with three bags. The largest is filled with prayer books and religious kids books. Another has snacks and water bottles – she keeps that one in the lobby (in case the boys need a quick break). The third is her purse, and it’s large enough to hold emergency medical supplies for her son with epilepsy.

She chose her parish based solely on its ability and willingness to include her family in all aspects of worship, religious education and parish activities.

Then there’s her younger son, who “doesn’t like the whole sit, stand, kneel routine,” and often sits, reading his The Action Bible comic book. He looks like he’s not paying attention, but in reality he is taking it all in.

Faith is an important part of life for many families in the autism community, as well as those who have children with other special needs. Yet families often struggle to find a place where they feel comfortable or welcome.

Many are afraid of being judged or ostracized because of their child’s behavior. Others think their kids’ presence will make it difficult for fellow worshipers to pray. Some had even been turned away because of a child’s behavior. A Minnesota church made headlines in 2008 after obtaining a court order banning a 13-year-old with autism from attending mass.

‘We have work to do’

Places of worship, such as churches, synagogues and mosques, run the gamut in how they welcome and include those with disabilities. Some accommodate worshipers based on individual needs. Some hold special services for those who aren’t comfortable in a traditional worship. Some even have special needs coordinators, programing and events that are sensory friendly – or support groups for families. On the flip side, there are places that turn families away or don’t know how to make these families feel welcome.

Cindy Merten, director of education and the All Abilities Inclusion Ministry at First Presbyterian Church of Birmingham – a church that offers a wide range of inclusive opportunities – often hears stories from parents who were asked not to come back to their prior church because of their special needs child.

Karen Schmid of South Lyon was told by her former church that they weren’t equipped to teach her son catechism as they’d never had a child with autism.

“With 3,000 families, that told me they just didn’t know they had children with autism,” says Schmid, who, in her quest to find a new church, conducted an informal survey of dozens of nearby parishes to find a more accommodating place to pray. Her results were so dismal that she decided to establish an autism ministry. She calls it All God’s Children Autism Ministry, and she helps families find a welcoming Catholic community and is available to provide workshops for clergy and religious educators.

The need is great. Nearly 54 million Americans have a disability, according to Census data. In 2004, the National Organization on Disability commissioned a survey to people with and without disabilities about the importance of religion. Faith, they found, was important to both groups, but significantly fewer people with a disability said they attended religious services.

Shelly Christensen is the founder of Inclusion Innovations – a national organization offering guidance, support and training for all faiths – and author of Jewish Community Guide to Inclusion of People with Disabilities. She says when those poll results first came out, they were a wake-up call. “It’s old data, but it serves as one of the few quantitative documentations we have on the issue. We all saw the survey results and said, ‘Whoa, we have work to do.'”

There is growing attention being given to inclusion in organized religion, and Christensen calls these efforts a “good start” – but she believes more work needs to be done. Many spiritual leaders and parents agree.

Rabbi Mitch Parker of B’nai Israel in West Bloomfield recalls a time in the mid-1990s when the parents of a child with Down syndrome told him how they were advised against having a bar mitzvah for their son, because doing so would show the congregants the things their 13-year-old child could not do.

“I believe that congregations are now doing a good job helping kids with challenges have a bar or bat mitzvah. Today, pretty much any family wanting one is able to do so by capitalizing on the strengths of the child and adapting participation,” Parker says.

Christensen thinks faith communities need to change the culture and attitude of inclusion through partnerships, not just inclusion committees or clergy.

Parents are often reluctant to approach clergy members, thinking they are too busy or have more pressing needs, Christensen adds. She also believes that clergy don’t always know how to talk to families for fear of doing or saying the wrong thing. Alternatively, some congregations mistakenly believe that what they have works.

“Culturally, people don’t talk about disabilities,” says Hasina Abdu, who served as outreach coordinator on the board of directors at her mosque, the Muslim Community of Western Suburbs in Canton. “Even though we’re behind, I feel like we’ve done a lot to address it through sermons and social media. Still, I don’t think we’re doing as much as we should do.”

Abdu is not a parent of a child with special needs but became aware of the challenges families face when a father approached the board to start a support group for families like his. As the dad’s son got older, it became harder for them to remain involved at the mosque – and they began to feel isolated.

The board agreed it was a good idea, and a group now meets monthly.

The mosque also finds other ways of accommodating those with special needs. For example, during the yearly celebration of Eid al-Adha, it hosts a carnival and welcomes families an hour early to provide a less crowded, more sensory-friendly environment.

As for families who shy away from worship, Wang thinks many are afraid of public embarrassment. “I am over that,” she says. “We sit in the front row and sometimes, by the way they participate, they put on a show every week. But my children have an equal right to be there and take part to the best of their ability. If they become too noisy or disruptive, we take a quick break.”

Through experience, she has learned that when someone is looking, they aren’t necessarily disapproving. “Most of the people who stare will come up to me after church and say something positive about my family,” she says. “The families who leave early out of embarrassment or don’t come miss the opportunity for that positive feedback.”

Aside from the fact that her church is a small congregation, Wang says the parish provides the perfect sensory environment for her son with autism. The chanting of the liturgy, repetition of prayer and burning of incense is calming to him, she says.

Unlike the traditional Sunday morning service the Wangs attend, Christensen says there is a trend toward segregated services – like the “no-shush” service, called Rejoicing Spirits, held twice a month for people of all abilities at First Presbyterian Church.

On select Sunday evenings at this Birmingham church, attendees spend 40 minutes singing, playing instruments and learning scripture through skits or puppet shows. A sign language interpreter is always there as well.

During services, if the noise gets to be too much, headphones are available. If a child gets too loud, nobody tries to quiet him; rather, they embrace his participation in the service. Dancing and walking around is welcome.

Everyone is encouraged to take a tambourine, shaker or drum and make some joyful noise, Merten adds. All ages and abilities are invited to participate in skits and the liturgy itself.

As the pastor leads dozens of worshipers, Souri Gaillard works diligently in the church kitchen. She has 40 minutes to finish preparing a turkey dinner – because all are welcome to stay after the service for dinner.

“I cook as a way to show my appreciation for this community,” says Gaillard, a Bloomfield Hills mom to Claudine, Arthur and Charlotte.

Her family found the church by accident. Claudine, who has Down syndrome, was enrolled in a music therapy class at FAR Therapeutic Arts and Recreation, which rents space in the building. “We were struggling at our previous church because it was too structured, and when we heard that inclusion is practiced here, we decided to try it out,” she says. “We have been welcomed, mentored and nurtured ever since we came.”

Such services let families participate in organized religious life. Christensen calls this the perfect model for worship but advises religious organizations to host more than a periodic service. People with disabilities want to belong and not be an occasional guest.

Having an inclusive place of worship not only benefits those with disabilities but also has a positive effect on the entire community, particularly other children who gain exposure to those who are different and learn important traits like understanding and acceptance.

“I feel like inclusion is a built-in anti-bullying campaign, because if we can reach young kids and show them that each person has value and we as adults teach our kids to be inclusive, before we know it, inclusion is normal to these kids. And that’s what so many families like mine are looking for,” says Dani Gillman, a West Bloomfield mom who joined her temple, Shir Shalom, because it welcomed those who are different – like her 12-year-old daughter with autism. “The opposite of inclusion is exclusion. No one likes to feel excluded and no one should feel excluded.