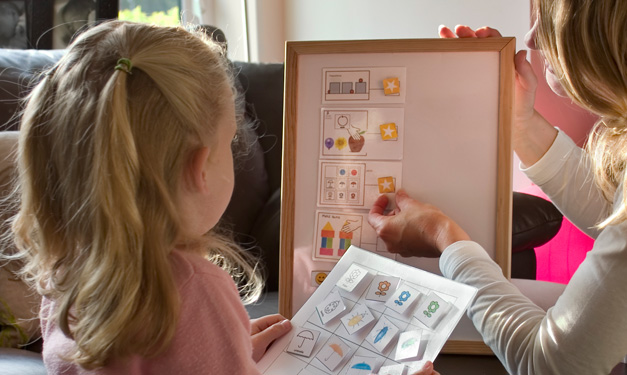 Helping children diagnosed with autism live productive lives is the ultimate goal of treatment. Seeing children succeed is the best part of the job for Tiffany Smiecinski, a Board Certified Behavior Analyst (BCBA) at the Center for Autism and Developmental Disabilities with Henry Ford's Department of Pediatrics.

"There is nothing better than seeing the parent of a non-vocal child get teary eyed when coming into a room and the child says 'Hi, Mommy!'" Smiecinski said.

Social interaction and communication skills are usually impaired with varying degrees of severity in autism. Autism is considered a "spectrum disorder," meaning that it affects individuals differently across a wide range of behaviors.

Smiecinski said parents should know that there is hope for children diagnosed with autism. "There are effective treatments for kids with Autism Spectrum Disorders, ABA being one of them," she said.

In the 1960s, behavior analysts began working with young children diagnosed with autism and related disorders. Since that time, a variety of ABA techniques have been developed for building skills in children with autism of all ages.

"ABA is much different now than it was a few years ago," Smiecinski said. "There are several new models that are more naturalistic, preventing 'robot-like' results."

Those techniques are used in formal situations, such as classrooms, and everyday events like play or mealtime. ABA techniques are used to develop basic skills including looking, listening and imitating, along with complex skills like reading and speaking.

Several studies have shown that specific ABA techniques can help individuals with autism learn specific skills, such as how to communicate, develop relationships, play, care for themselves, learn in school, succeed at work, and participate fully in family and community activities. Supporters of ABA say that it is simply "good teaching" and the techniques are not just for children with autism.

"ABA works with children of all ages and skill levels. Results will vary for each child, but some progress will always be made," Smiecinski said.

Autism is diagnosed in about 1 of every 100 children. Autism is more common among boys than girls. An estimated 1 out of 70 boys is diagnosed with autism in the United States.

While there isn't a test for autism, doctors look at symptoms and behavior when making a diagnosis. Symptoms may appear within the first few months of life. Autism usually appears during the first three years of life and affects how the brain functions. Sometimes, autism may be diagnosed later than age 3, often in relation to learning, social or emotional difficulties. If you think there could be a problem with the way your child plays, learns, speaks or acts, contact your child's doctor to discuss your concerns.

To make an appointment at Henry Ford's Center for Autism and Developmental Disabilities, call 313-916-4665 or email autismcenter@hfhs.org.