Juvenile Idiopathic (Rheumatoid) Arthritis and Its Impact on Kids 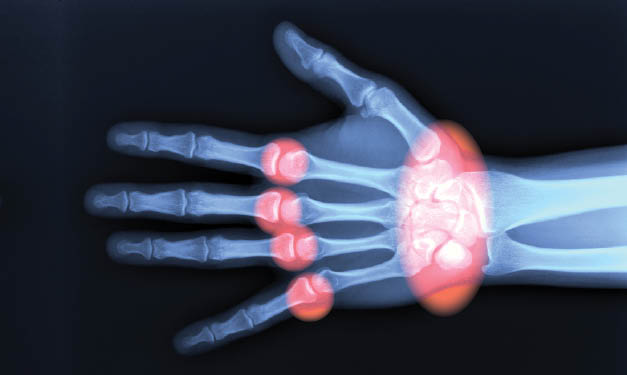 About 294,000 kids in the United States have JIA or related conditions, according to the latest numbers cited by the Arthritis Foundation. It also notes that, here in Michigan, approximately 10,300 kids have some form of arthritis.

Charlie Stahl of Grosse Pointe Woods, Mich. is one of them. He’s a 15-year-old kid who digs German language classes, noodles on the trumpet – and likes to scare his mom by doing wild tricks on his skateboard. It’s hard to tell by watching him that Charlie has arthritis.

“I have it in both of my ankles, both of my knees and both of my wrists,” he says. It’s also in his toes, mom Valerie adds – and, a couple years ago, it triggered sleep apnea.

Charlie was diagnosed with JIA at just 1 year old. The news was devastating for Valerie, but not entirely surprising. She has had JIA from infancy.

“I can deal with my own pain and the surgeries and the hurting,” Valerie says, “but then when it’s your own child … well, it broke my heart.”

The good news for Charlie’s family is that doctors know how to treat JIA better than ever before.

In the 1960s and ’70s, Charlie’s mother’s doctors relied on aspirin, physical therapy and surgery to correct damage wrought by the chronic disease. At 48, Valerie has already endured 16 surgeries, including wrist fusions, knee replacements and a rebuilt jaw.

For Charlie, specialists have many more preventative tools to fight the crippling effects of arthritis before they set in.

“That’s one of the coolest things now, is that the drugs that have been developed are targeting specific proteins that are involved in the inflammatory cascade,” she says – and “dramatically” cutting down on damage, pain and swelling to the joints. Powerful new “biologic” drugs (including Humira, Orencia and Actemra) are especially effective for kids with the most severe cases.

Charlie’s arthritis is controlled by medication. “I get a little bit of pain if I do too much (activity),” he says. “Otherwise, I feel normal.” But his recuperation time is longer. Last summer, he fell on his knee while skateboarding, Valerie recalls; it took a good two weeks to recover, where other kids might rebound in a few days.

“I think he’s stabilized” in recent years, she says. “He has his ups and downs.”

Charlie’s mother identified his symptoms immediately and got him the help he needed. But most parents don’t know children can get arthritis.

“Absolutely, when people think of arthritis, they don’t think of kids,” Haftel says. “A lot of kids will go undiagnosed or end up at an orthopedic surgeon instead of a rheumatologist.”

Pediatricians often don’t learn about JIA in medical school, so it can take multiple doctor visits and many months to get the right diagnosis. That means critical treatment time has been lost.

Check out the Kids Get Arthritis, Too! of ArthritisToday.org for resources for children and parents.

Kara Dorda, program manager for the Arthritis Foundation’s Michigan Chapter based in Troy – who was herself diagnosed with JIA at 11 months old – says the foundation works to education pediatricians with its Critical Elements of Care for Juvenile Arthritis booklet.

“Once the deformity has occurred and it’s in the joints, the medication isn’t going to correct it,” she adds. “It can control symptoms.”

Luckily, she adds, there are several pediatric rheumatologists in Michigan – and new student loan incentives for those getting into the field. Still, there’s a nationwide shortage of these experts.

Yet there also are telltale signs parents can look for. “Morning stiffness is a classic manifestation of (chronic) inflammatory arthritis,” says Haftel – that is, if it persists daily for several weeks. Kids also tend to limp or may have trouble walking for a good 15-20 minute stretch.

“If that’s going on for several weeks and hasn’t resolved, that really needs to evaluated,” Haftel says.

Andy Moy of Waterford, who’s 14, has a less common form of arthritis. When he was 4 years old, an itchy, ring-shaped welt developed on his scalp and wouldn’t go away. Several months passed before a dermatologist finally recognized it as psoriasis.

“It took us a long time before we got that diagnosis,” says Andy’s dad, Nelson. “We took him to the family doctor, and he didn’t know what it was.”

As Andy’s parents struggled to manage his psoriasis with medications, they received a surprise call from Andy’s gym teacher. The kindergartner just wasn’t doing as well as expected in gym, he told them.

Explore the Arthritis Foundation’s resources for school success for kids with JIA.

Jaime and Nelson Moy understood their son’s physical issues might be related to the psoriasis, which is also an immunological disorder. They took him to C.S. Mott Hospital’s division of pediatric rheumatology. The diagnosis was juvenile psoriatic arthritis – a double whammy that involves symptoms of both diseases.

“Every morning Andy would wake up and say his back hurt, and we would say, ‘C’mon, get out of bed. You’re fine,'” Jaime says. “When we got the diagnosis, I was in tears and said, ‘We have to go buy a new mattress right now,’ trying to make up for the fact that he’d been in pain for so long and we didn’t know.”

In addition to the emotional and physical toll, chronic conditions also can impact families financially. Andy is regularly taking seven different medications – plus a few extras. Since 2009, the Moys have turned to Children’s Special Health Care Services – offered by the Michigan government – for help.

It’s a commitment, but it cuts down on tough medication decisions they used to have to make with higher co-pays, Jaime says. “We still shake our heads, like
, omigosh, what’s next?”

But the family has spun the disease into a chance to help others, too. Back in 2011, Andy, a bright kid who loves photography, started an annual Nerf War fundraiser, held in March in Clarkston, to benefit the annual Detroit Zoo Arthritis Walk in May.

Today, psoriasis covers about half of his body. Mornings are definitely rough. “The hardest part of my day is getting up and walking down the stairs, which is pretty hard for me,” Andy says. Fortunately, thanks to special accommodations with his school, the morning school bus picks him up at his home. Afternoons, when the weather is nice, he enjoys walking home the 1.5 miles with friends.

Andy’s parents are hoping he’ll achieve a drug-induced remission some day, a goal that has eluded him over the past 10 years. “He has not come close to that,” Jaime says. “The doctors say he has a stubborn case of arthritis, and that he’ll probably be on medication the rest of his life.”

“Our biggest hope,” Nelson adds, “is that he’ll be happy, but also that he can find a job to support his medications.”

Ann Patterson, 12, loves cheerleading. The Warren seventh grader is thinking softball next year – something she’s also played in the past, along with basketball, swimming and soccer.

There were days when her parents, Lori and Andrew, wondered whether she’d have such a normal life.

“It only took about a week,” Lori says of Ann’s symptoms that appeared at 22 months. “It was a Thursday morning, and I thought maybe she had hurt herself in gymnastics. Six days later I went to get her out of her crib and she couldn’t even stand up.”

The family’s pediatrician quickly ruled out a virus and referred Ann to Children’s Hospital of Michigan in Detroit. The diagnosis? Arthritis. “We were lucky that they were so fast with the diagnosis and didn’t just fluff it off,” Lori says.

The Pattersons are hopeful that Ann’s arthritis could go into complete remission; in her tween years, she achieved drug-induced remission three times – and there’s talk about weaning her off medications again soon. Before, each time doctors took her off medication, Ann’s knees became swollen and achy again.

On her meds, though, Andrew says Ann is doing very well. She gets one injection a week and, other than slight nausea, the side effects are not bad. “She lives the same life as any other 12-year-old. She doesn’t miss a beat.”

But like Andy and Charlie, there is physical discomfort under Ann’s cheerful exterior. “Sometimes it’s hard to run, and (she) can’t run as fast as the other kids,” Ann says.

Today’s medications do a great job of calming obvious symptoms, like red puffy joints. Ironically, that may be why some adults, even teachers, don’t believe these kids have real physical problems.

Nelson Moy has heard it too many times. “The problem is that it’s not a visible disability. People look at Andy and think, ‘Oh, he’s probably just being lazy’.”

The Arthritis Foundation of Michigan helps families get school accommodations for kids with what they call “hidden handicaps,” such as pain, fatigue, limited mobility, the inability to sit on the floor or carry a heavy set of books.

Special education laws have many opportunities to give kids services, says Dorda with the foundation – which works with families to help them get what their kids need from their school districts.

“The child has a great ability to determine what they’re able to take on and handle,” she explains – whether that’s only doing three pushups in gym class versus 10, or perhaps not sitting on a hard gym floor for hours during an assembly. Kids can approach teachers for anything from a five-minute walk to stretch out sore joints to a trip to the nurse’s office for necessary medications.

“The quality of life for children has improved so much,” Dorda says.

The foundation’s Troy chapter has become an important resource for support and information for many families touched by JIA. “They have parent seminars we’ve been able to go to and we’ve gone to national conferences,” says Jaime Moy. “They’ve been very helpful.”

It holds a variety of fundraising events in support of its programs and research, such as the festive Jingle Bell Runs in December that draw amateur and professional runners. But among the kids, the chapter’s most popular program is likely Camp Dakota, a summer camp exclusively for kids with arthritis.

Charlie Stahl loves it. “Camp Dakota is so fun. We always do a lot of activities, and it’s nice to meet other kids who have the same thing you do.” This year, he plans to enter the counselors-in-training program with buddy Andy Moy.

The week-long camp includes all the trimmings – crafts, boating, campfires and s’mores – but the kids are also taught about benefits of exercise and taking their medications. “I just can’t say how much that camp does for these kids,” says Charlie’s mom Valerie. “He (now) knows other kids in the metro area who he can communicate with.”

But Charlie isn’t only communicating with his peers. The sandy-haired sophomore is a seasoned advocate for kids with arthritis. He’s testified before the Michigan House of Representatives and shared his story with congressional staffers in Washington, D.C. He also participates in those Detroit Zoo arthritis walks every year and still does speeches on behalf of the Arthritis Foundation.

“It’s something not many people know about,” Charlie says. “But I’m just like every other kid. Every once in a while I have to slow down, but otherwise I keep up. I am normal and this doesn’t stop me.”