Kids with Special Needs by the Details and Numbers

The term 'special needs' is broad, to say the least. Here's a closer look at some common childhood challenges, what they are and how many children are affected. 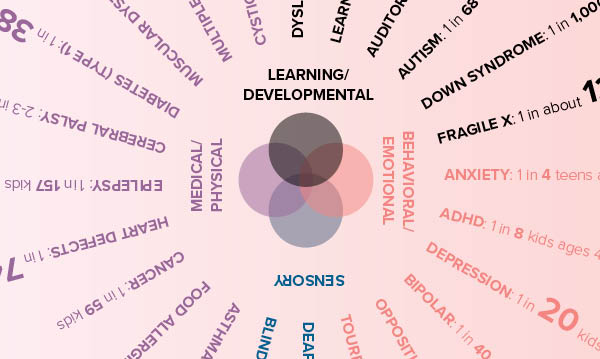 Childhood special needs are unique and diverse. How prevalent are some of the most well known diagnoses – and what exactly are they?

To get a snapshot, Metro Parent dug through a variety of definitions, studies and stats, using some of the latest data and info from reputable health organizations and government agencies. When necessary, to determine ratios and percentages of affected kids, we also did some of our own math with recent census data.

That said, a disclaimer: The ratios and percentages here won’t necessarily be the “official” or absolute numbers – because, often, data for kids is provided in a range, is based on the most recent estimates (which can be many years old in some cases), hasn’t been well-tracked or simply goes outdated quickly. Our goal? To give a sense of some childhood special needs in the United States as of late 2017.

A few other notes: The four categories here – developmental/learning, behavioral/emotional, sensory and medical/physical – are loose; some needs may fit more than one. Within each category, needs are listed from highest-to-lowest likelihood. Likewise, often, kids may have multiple diagnoses.

If you have suggestions or feedback, just let us know in the comments below.