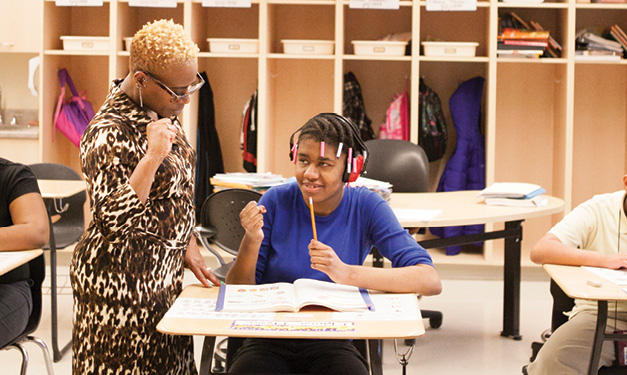 Navigating the special needs education system, if you're not familiar with it, is a whole new world. There are a few reasons parents might find it challenging.

It's all based on laws, and there's a lot of jargon and acronyms used in the community, explains Megan Clor, a director of clinical services at The Children's Center. Those can be confusing. Shila Ducre, resource room teacher at University Prep Academy Elementary – Mark Murray Campus, finds that while parents aren't familiar with all the steps in the process at first, it gets easier once they sit down and talk with the school.

Trying to figure out the special needs education system and where to start? Follow these steps.

"It's not that it's hard for them to navigate. Parents don't know the services," says Deborah Love-Peel, special education specialist with Detroit Parent Network at Detroit Public Schools' Charles R. Drew Transition Center's Parent Resource Center. That's why it's helpful DPS' Drew Transition Center has the Parent Resource Center where she works, as well as other organizations in the building. Parents have an easier time accessing services because they're in a central location – what they call the "one-stop support shop."

However, many don't know about the services or don't get them for their child until later, because may experience depression upon finding out about their child's disabilities, Love-Peel explains.

"There's a denial and a depression process that all of us go through," she says, adding that parents have to be ready and willing to focus on their child's disability to get them support. "Until the parent believes that there's an issue and understands that you have to deal with that issue, no one can get through to them," she says.

But it's normal – and all part of the process.

"Don't lose hope. When you find out your child has a special need or some type of disability, there's always a moment of processing and accepting that, so I think it's OK to let parents know that it's OK," Clor says.

Check out this list of helpful resources for parents of kids with special needs.

A parent may not know about what's available to his or her child if the school doesn't know what services are out there, either. "I think it's different for different cases," Love-Peel notes.

Don't be afraid to take initiative, though. Know that as a parent, you play an important role in getting your child the help and services he or she needs.

"How far your child goes depends as much on you as it does the educational system," says Love-Peel.

Montoya suggests parents do their own research to find resources in the community. She started by Googling, checking out Metro Parent magazine, and looking for support groups and workshops.