Broc Brown, 20, has a rare condition that makes him one of the tallest people in the world but this local young man's outlook easily rivals his height. 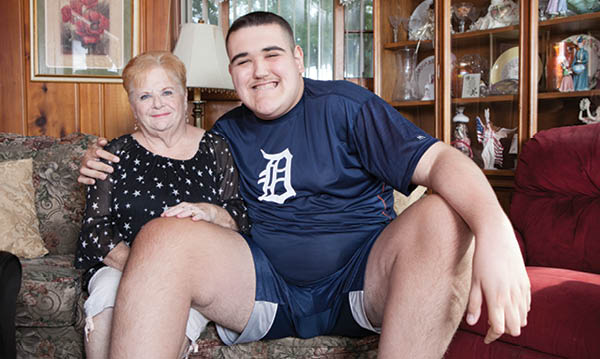 When Broc Brown was 5 years old, he started kindergarten standing 5 feet 2 inches tall. By 18, he was officially the world’s tallest teenager.

Today, photos of him and his grandmother almost look fake – grinning, the 7-foot-8-inch 20-year-old appears almost twice her size; a giant among us.

Brown has Sotos syndrome, a genetic disorder that causes excessive physical growth and is often accompanied by cognitive and emotional difficulties. Doctors aren’t sure if he’s done growing, but Brown is already one of the tallest people in the world.

Growing up just outside of Jackson in Michigan Center, the young man has had his share of challenges. While his condition is rare, his story mirrors that of many children who stand out because of their special needs.

“At first, anybody who saw me would pick on me and bully me because I was different,” he explains. “It was hard to learn to ride a bike and I got in a lot of trouble for being bad.”

The emotional symptoms that often come with Sotos syndrome led to his additional diagnoses of ADHD, intermittent explosive disorder and oppositional defiant disorder.

“Broc had a hard time controlling his emotions when he was younger,” says his aunt, Stacy Snyder, who runs a support page for her nephew on Facebook. “He has several learning and behavioral issues that we had to work through.”

Happy to have moved past classroom difficulties, Brown is more confident. “I got used to the attention and don’t mind getting asked questions.”

Sotos is not life-threatening, and doctors believe Brown will have a normal lifespan. His challenges mostly revolve around pain – think “growing pains,” but to the extreme – plus pain from stress fractures in his vertebrae, spina bifida and scoliosis, his aunt explains.

“Broc has a lot of back pain due to several stress fractures in his spine. He is not able to straighten his hands or knees. He gets winded very easily and can’t do a lot of physical activity.”

Then, of course, there’s the constant challenge of trying to fit into a world that’s just a bit too small. Everyday activities are tough, like “going through doors and fitting in cars,” Brown says.

And it’s nearly impossible for his family to find him clothes and shoes that fit, though last year Brown received a donation of custom size 28 shoes by Feetz, a 3D-printed shoe company.

But Brown, who lives with his grandmother, Joy, looks to the up side – the way up side, in his case – and is proud of his accomplishments, including bringing awareness to Sotos syndrome by appearing on TLC’s Tallest Teens series and traveling to meet other families affected by the disorder.

Plus, he takes pleasure in the small things – the simple joy, for example, of “reaching up high,” he says.

He also enjoys watching sports and wrestling, visiting other states, playing video games and visiting his mother, Darci, who is currently in a nursing home due to medical issues.

Looking to the future, he’d like to work at a sports store one day – Brown loves sports and just wishes he could find more jerseys in his size, his aunt says – and he hopes to meet pro wrestler John Cena, one of his heroes.

While Sotos can manifest differently for those affected, Snyder says those who have it share something special.

“It can come with health issues, learning disabilities and behavioral issues, just to name a few, but the people we have met that have Sotos have a heart of gold and can be very lovable, as well,” she says.

And wise, it seems. When asked what advice he’d give young people with special needs, Brown says, “Never give up and always respect.”

“My friend Garrett told me, ‘Never give up on your dreams,'” he adds, referring to a friend in Florida who also has Sotos. “You can accomplish anything you put your mind to.”

How to Help Broc

Health insurance challenges have made it difficult for Broc Brown’s family to get him a wheelchair. They’re also saving up to purchase a vehicle he can fit in. If you’d like to help, go to “The Support Page for Broc D Brown.”