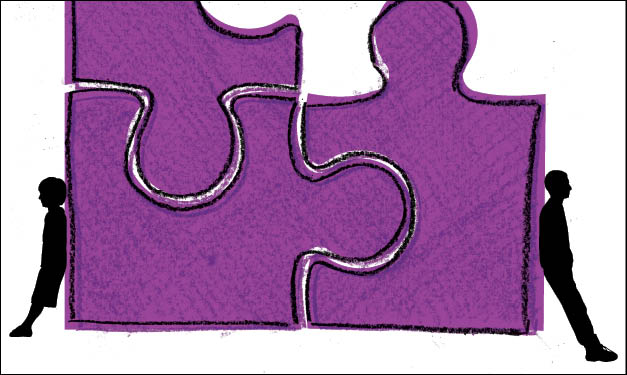 Like many parents of autistic children, Lisa Espinoza is excited by new state legislation that requires insurance companies to cover the high cost of therapy for kids on the spectrum.

Yet as the laws come closer to taking effect, she is not alone in harboring questions and concerns.

Espinoza, who lobbied for five years to help pass the legislation as a member of the parent group Autism Insurance in Michigan, has high hopes the new laws will help not only her own son, but children across the state.

"I was always looking to find different therapies and came across the same roadblocks everyone else has – not being able to afford the treatment," Espinoza says. "If these children receive the degree and intensity of help they need, how many of them can regain normal functioning lives instead of being stuck in their own bodies, unable to express their needs and feelings?"

Yet on the verge of the legislation's launch in mid-October 2012, she is among those in the autism community who are left wondering if Michigan's therapy providers will be able to meet the anticipated demand.

According to the Centers for Disease Control, one in every 88 children (1 in every 54 boys) is affected with ASD, a complex neurological disability that has become a virtual epidemic in the United States.

In Michigan, more than 15,000 individuals are estimated to suffer from ASD. The new Autism Insurance Reform brings Michigan in line with at least 30 other states that specifically require insurance companies to provide coverage for autism treatment.

The package of bills (SB 414, 415 and 981) were passed in the Michigan Legislature on March 29, 2012, and signed into law the next month, in April. Insurance companies and autism treatment providers were given 180 days to put the new law into effect. What can parents expect on the magic date of Oct. 15?

According to Dr. Colleen Allen, one of the leading autism experts in Michigan, many questions remain unanswered.

Allen, president and CEO of the Autism Alliance of Michigan and chair of the Michigan Autism Council DCH (Department of Community Health), is working diligently with insurance companies, academia, treatment providers – and, most of all, families – to ensure the new laws take hold as seamlessly as possible. The organization has set up an AAoM Autism Insurance Collaboration website portal that is constantly updated to reflect latest developments, and AAOM has been touring the state hosting free seminars to educate people on the nuances of the laws.

Allen says one of her biggest concerns is there will be a glut of parents seeking treatment for their children – and a lack of skilled professionals to fill increased demand.

"Most of the challenges for our state going forward are those same challenges that have been experienced by other states that have already passed this. I fully expected a lot of what's happening right now, and it follows closely the issues around ramping up services," Allen says.

"You've got all these families now that are covered, the privately insured and Medicaid population, and you have so few therapists."

Allen's greatest concern is in the area of applied behavior analysis, or ABA – an intense, one-on-one therapy that addresses behavior issues and skill deficiencies by breaking tasks into small steps, reinforcing behavior through repetition, and recording exhaustive data on individual progress.

"We've had speech and occupational therapy for children; those service providers have been in our state," Allen says. "What we have not had are board-certified behavior analysts (BCBAs). This is a new therapy type for our state that provides evidence-based treatment."

Experts, including Allen, agree that ABA is crucial to early intervention, but the treatment is not cheap. The therapy is recommended 20-40 hours a week, and at up to $60 an hour, many parents simply cannot afford it.

Because of this, Allen says, Michigan just doesn't have many ABA therapists, despite both Eastern Michigan and Western Michigan universities offering well-respected BCBA programs. Until now, professionals who were trained in Michigan have left the state for better employment opportunities, but AAoM is working to change that.

"There are significant efforts around the state to bring these BCBAs in. We started at 30 BCBAs in April; we're already to 41," Allen says. "We're recruiting alumni to come back and start centers."

The work seems to be paying off. Allen says other states that have enacted this legislation have taken three to five years to ramp up services to sufficient levels.

"I see Michigan taking one to two years for supply and demand to even out. We're taking implementation very seriously," she says. "Through Autism Alliance, we're working with universities, providers, insurers, parents. … That coordinated effort just hasn't been done anywhere else. We're really breaking new ground."

Kerry Peterson, M.A., CCC-SP, BCBA, is co-director of autism programs at KCC, and says ABA is the most expensive intervention. She estimates it can add up to $50,000 a year to meet the national best practices guidelines for ABA therapy for children under age 6.

"For most families, cost has been a barrier," she says.

Right now, about 17 families are enrolled in KCC's ABA program, administered by Peterson and one other BCBA-certified professional. Peterson expects demand to increase in light of Michigan's new laws.

"We are worried. I have calls every day from families interested in getting on the waiting list. We are trying to figure out how we are going to adapt to all the families seeking this service," Peterson says. "At this point, we're trying to determine to what extent we're really able to grow our program and still maintain the quality."

As autism insurance reform plays out, Peterson says the center may consider expanding its facility and hiring more BCBAs. But therapists with experience are hard to find.

Still, Peterson feels the new legislation will open doors for families who previously were locked out of treatment.

"I think it's going to be enormously helpful, because families have been really frustrated by the toll that it's taken financially," she says. "We have
families take out second mortgages on their homes and grandparents spend their retirement savings in order to get the recommended treatment for their child or grandchild."

For Stacie Rulison, ABA made such a difference for her son, she changed careers to become a therapist herself. Rulison left a high-profile job at EDS to take a position as operations director for AAoM, and pursue a master's degree in BCBA.

Rulison's son, Ryder, was officially diagnosed with autism at age 3. He was non-verbal, non-responsive to family members and, like many children with autism, appeared lost in his own world. Through 30 hours of ABA therapy each week, at an out-of-pocket cost of about $1,000 a month, Ryder made "amazing" progress, Rulison says.

"Within two weeks, he was saying 'mom' and 'dad.' Eventually, his phrases grew into sentences," Rulison says. "The therapy was so successful, it changed our lives."

Today, after two years of ABA therapy, Ryder is mainstreamed in second grade and, aside from some social struggles, common for children with autism, he is excelling behaviorally and academically.

Rulison enrolled in an online program through Arizona State University to become BCBA-certified. She also helps Dr. Colleen Allen present programs throughout the state to educate parents on how to take advantage of the opportunities afforded by Michigan's insurance reform.

Many parents are eagerly awaiting the release of information from insurance companies, so they get official diagnoses and make appointments for therapies they are eager to pursue. So far, insurance companies are slow to release information as they scramble to prepare for a flood of demand. About 2,000 children are expected to seek therapy under insurance reform in the first year, according to the State of Michigan.

Rulison encourages parents to reach out to their insurance companies for help navigating new benefits.

"Now the real work starts," she says. "But I don't know of any other state that's gone to such lengths to get programs into effect before the insurance takes effect."

Brought to you by Aim High School
Read more
Outdoors