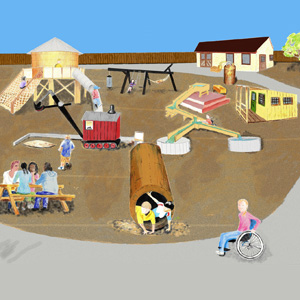 The Henry Ford in Dearborn will officially open its historically themed playscape in Greenfield Village on Oct. 5, 2013. The playground, called the Donald F. Kosch Village Playground, will welcome typically developing children – as well as kids with various physical, developmental and sensory disorders.

The hours for the new kids playscape will be 9:30 a.m.-5 p.m. from April to the end of October, which follows the same schedule as the village's train.

A place for all kids

The Henry Ford announced the news of the playscape at a press conference on April 17, 2013. Featuring approximately 25,000 feet of kid-friendly fun, the new attraction has been designed to resemble a 1930s construction site, while meeting or exceeding all modern-day accepted accessibility standards.

In the April 2013 press release, Patricia Mooradian, president of The Henry Ford said, "It was always very important to Henry to create a place where children could come and be inspired by their surroundings – something that is still very important to us to this day."

The fenced-in area will feature an interactive steam shovel at its center, allowing kids to manipulate the levers and dig in the sand. Other amenities are set to include a rock climbing wall, water tower and swings.

It'll also be home to a 20-foot-long boiler tunnel that formerly sat near the village's Armington & Sims Machine Shop – as well as a boardable 1931 Ford Model AA truck, to name just a few standouts.

Elements of the playscape will be constructed out of natural or authentic materials, echoing the Greenfield Village theme, the release noted, and will be conveniently located next to the carousel and near food facilities and restrooms.

The playscape's arrival coincides with the 150th birthday anniversary of Henry Ford. It was made possible with a gift from Don and Mary Kosch, The Henry Ford noted, as well as a planning grant from W.K. Kellogg Foundation.

"We hope that this playscape can serve as a model for others," Mooradian added, "to become more aware and more willing to adopt design principles that address the interest and needs of people, especially children, of all abilities."