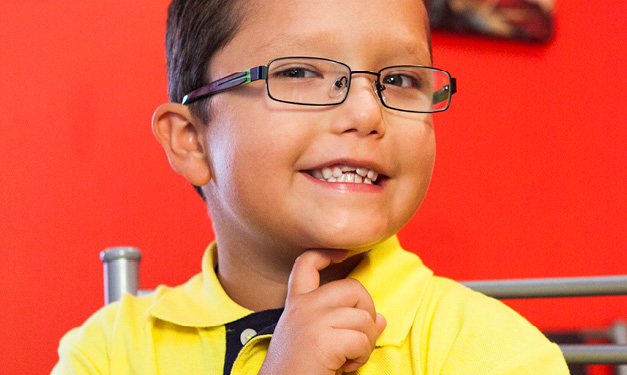 Just two years ago, it was impossible to understand then-5-year-old John Paul Orlosky when he spoke. His sounds were nasally and lacked proper enunciation. It wasn't for lack of trying.

When he was 2 years old, his parents, Ryan and Jessica Orlosky of Troy, consulted with a speech pathologist, who determined John Paul's problems stemmed from a cleft palate.

While most people think of cleft palates as the open-lip deformation that can be seen from birth, it can also include the palate from the lip, under the nose and through to the back of the mouth. John Paul's submucous cleft palate wasn't fully formed, but there were no visual lip deformities signaling an issue.

"In John Paul's case, it really didn't present as a problem until he tried to speak," says Dr. Matthew Rontal, John Paul's doctor and a surgeon at the Rontal-Akervall Clinic in Farmington Hills. After several surgeries, John Paul still faces challenges, but like many kids with cleft palates, his prognosis is positive.

According to the Centers for Disease Control, cleft palate occurs in 1 to 2 of every 1,000 births. It can be as small as a slit in the lip or severe as a large opening from the lip through the uvula – the hanging ball in the back of the mouth. It's often detected during pregnancy as the lips and mouth form within the first seven to nine weeks of the fetus' development, but others are seen at birth or even later, as with John Paul.

Rontal says that the palate separates the nose from the throat and quickly opens and closes to help make sounds and form words. In children with cleft palates, there is no way to close that gap, resulting in speech difficulties as air passes from the nose and out of the mouth.

While there are no definitive causes of cleft palate, there are some genetic defects that can contribute to it.

In John Paul's case, velo-cardio-facial syndrome (VCFS), or a missing portion of chromosome 22, was behind his cleft palate. VCFS can cause a variety of disabilities, including cleft palates, but also everything from low muscle tone and attention deficit disorder to autoimmune deficiencies and even mental illness.

After years of searching for reasons why their son was developmentally delayed, the Orloskys were tipped off to his disorder by the speech pathologist, who recommended genetic testing. Once the results were in, the Orloskys finally had their reason, but still faced an uncertain future.

"My heart was just hard," says Jessica. "I was embarrassed to tell anyone. Nobody is going to knock on your door and tell you what to do."

Jessica says for months, she cried herself to sleep at night knowing her son faced a challenging life, and the cleft palate was just part of that. However, after doing research, networking with other parents and turning to their faith, the Orloskys set out to do whatever they could to help John Paul succeed.

"We want him to feel loved by us, by the family and by God," dad Ryan says. "God never gives you more than you can handle."

While, as parents, they knew John Paul needed help with his speech, they had no idea it would take so much more to correct the problem. They turned to Rontal for help.

Rontal and his associates see many parents before their children are even born. Through prenatal ultrasounds, cleft palate deformities can be identified prior to the birth of a child and a plan can be put in place immediately.

"I love to meet with parents before delivery. I want to let them know that things are going to be OK," Rontal says. Many parents come to him thinking their children will never be normal, starting with a basic function of life: eating. "Every baby with a cleft can feed. Even in third-world countries, you see the children with cleft palates growing and thriving. We want to support the parents, encourage them and tell them their baby is going to do great."

The treatment depends on the severity.

"As a general rule of thumb, the lip is repaired around 3 months of age. The palate can be repaired around 9 months of age. As the child grows, we follow them and, if additional procedures are required, we will do that as needed," Rontal says. That includes speech treatments, orthodontics or even rhinoplasty to straighten the nose or surgery to correct the alignment of the jaw and make things look and function as normal as possible.

At the Rontal-Akervall Clinic, a group of specialty doctors works to develop a plan.

"We have an entire team put together to manage the growing facial skeleton of our patient," Rontal says. That team is composed of plastic and reconstructive surgeons, ear, nose and throat specialists, speech and occupational therapists, audiologists, psychologists, orthodontists, prosthodontics – and nurses to support each specialty.

"It takes a big group of people," Rontal says. "We meet the child as a group within the first year of life. This is a chance for everyone to meet each patient. There's a lot to be gained from everyone being present and meeting the patient at the same time.

"Being there all together is very powerful and gives the parents all of our opinions at the same time."

After meeting John Paul, Rontal knew surgery would be the only option.

"There was no way to fix John Paul's problem with speech therapy," Rontal says. The plan was to place a flap over John Paul's cleft opening to create a smaller hole for air to escape when he would speak.

For John Paul, things got worse before they got better. One of his first surgeries was to remove the adenoids and tonsils to correct breathing issues.

"After the adenoids were removed, the hole was bigger and his speech became worse," Jessica says. "Instead of going forward, he went back. He had to relearn making sounds in speech again."

Rontal suggested John Paul heal for six months, finish kindergarten and then have another surgery to fix the cleft palate.

That year was not easy for the Orloskys.

Jessica said children in John Paul's class began to question why they couldn't understand him. In order to keep her son from being isolated because of his cleft palate and speech difficulties, she began to educate the parents. That also meant explaining the limitations caused by VCFS.

"We tell the parents about his VCFS and the cleft palate. We try to be the constants in the relationships, inviting his friends to our house for play dates," Jessica says. "At some point, I know I can't be there with him, but these past three years, I have been in the school, volunteering so I can help the teachers, parents and students understand who John Paul is."

The Troy School District, where the Orloskys live, has helped the family get the speech, physical and occupational therapy they need for John Paul while keeping him in the mainstream classroom with his friends.

Rontal says the Orloskys are not alone in their concerns about social development. There are several local and national support groups for parents of kids with cleft palates, and his office staff stays in tune with what is available and refers clients to these groups as well. "I truly believe giving parents the knowledge and wherewithal to take care of their babies makes all the difference," Rontal says.

In June 2013, 11 months after the surgery to remove his tonsils and adenoids, John Paul had surgery again. Rontal says kids face healing time
and speech therapy after the surgery, but the difference is life-altering.

"The surgery was a big deal, but then we went back to speech. When I saw the videos from before the surgery and heard him after, I couldn't believe it," says Jessica. She says John Paul sounded like a normal kid for the first time. After speech therapy to relearn how to form sounds, John Paul gained confidence and is now a typical 7-year-old second-grader who likes Star Wars and Ninjago.

He still has speech and other therapies to keep the symptoms of his VCFS under control, but, Rontal says, the outlook is good. And that is music to the ears of John Paul's parents.

They offer advice to parents who face the challenges that come with a cleft palate and other deformities.

"Support your child in everything he does. Have a strong support system. Keep close friends and educate them," Ryan says. "Don't run away from it. Face it head on. And do your research."

Michigan Cleft Network: Started in 2005 for by a mother caring for a child with a cleft palate, it is now a network of those impacted by cleft lips and palates as well as parents and medical professionals.

Foundation for Faces of Children: Provides support and information not only related to the medical side of cleft palates and other craniofacial differences but also psychosocial, financial and educational issues.

Children's Craniofacial Association: Educates and supports the families of kids with craniofacial deformities.