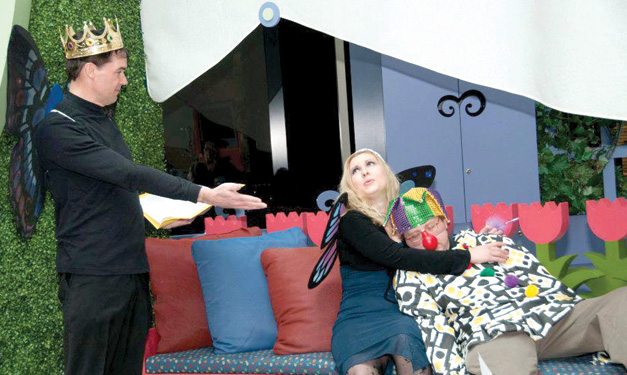 Chemo treatments and hospital stays aren't fun for anybody – especially kids. But Shakespeare Against Cancer, a local theater troupe, is entertaining children at southeast Michigan hospitals in an effort to make it a little better.

"We perform for them and give them a little bit of an escape from their treatment and their therapy," the native Detroiter says.

For more information, visit the Shakespeare Against Cancer Facebook page, or send the theater group an email.

White started the group last year in memory of her aunt, Sherry Peterson, who had pancreatic cancer. White says it was a way to combine her love for Shakespeare, art, kids and community.

After the first performance, White "saw the kids' faces" and "knew it was the right thing to do."

"To make the story actually come to life for the kid, it brings it to a whole 'nother level," she explains.

After the performances, her group passes out Shakespeare-themed gifts like finger puppets, magic wands and coloring books. Since Shakespeare Against Cancer started, people have been donating gifts for the cause, White says.

So far, they've performed at Children's Hospital of Michigan and Oakwood and Beaumont hospitals. Tammy Morris, clinical program manager at Oakwood Center for Exceptional Families, says they saw "a number of unexpected benefits" when the group came to visit.

"The performance brought our patients and families together, offered them something new – and I was overjoyed to see some of our more severely involved patients paying keen attention throughout the entire performance," Morris says.

White says she wants to expand from southeast Michigan to performing for sick kids all over the state. "I consider it medicine for the heart," she says.