A natural disaster prompted these sisters to create a special alarm system for people with hearing issues. 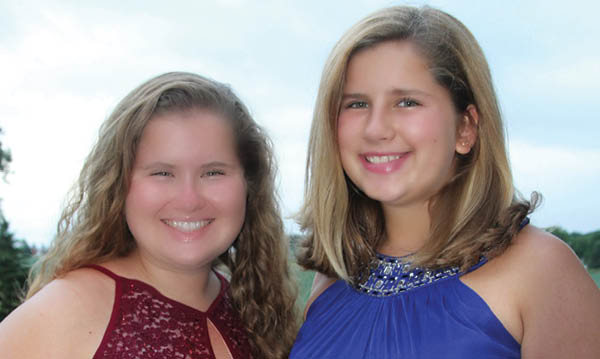 The story of Abigail and Lilly Diuble begins with a disaster – a natural disaster, to be specific. On June 23, 2015, a tornado struck their Manchester home. Now, from rubble, the teen sisters have emerged as two of Michigan’s top youth volunteers.

The event was especially traumatic for Lilly, 15, who was born with hearing and visual impairments. “That was probably the scariest moment of my life,” she says.

Because Lilly doesn’t sleep with her hearing aid, waking her up that night amid the chaos was a challenge for their mom, Angela. “We really realized at that time, seconds literally counted,” says Abigail, 13.

That inspired her to create the nonprofit Diuble Family Vision. Its goal? To provide Krown-brand KA300 alarm systems to others with hearing issues. These bed-shaking devices, which detect carbon monoxide, smoke and fire, awaken people during emergencies. So far, they’ve distributed three to Manchester kids – at no cost to their families.

Lilly has a strong cause, too. Since 2010, she’s raised over $150,000 for the Foundation Fighting Blindness. The money goes toward research for vision restoration, prevention and treatment of blindness.

For their efforts, the sisters were among seven Michigan kids honored at the 2017 Governor’s Service Awards. There were 49 total winners.

Abigail, who also loves volleyball and boating, hopes to expand her project and has her sights set on being a dermatologist or veterinarian. Lilly, who plays flute and participates in flag corps, is aiming to study law.

For other kids who want to get involved, Lilly says, start small. “Find a way that you can help and just roll with it.” And, Abigail adds, believe. “Anybody and everybody can make a difference in the world.”