The Sound of Silence: When Children Are Born Deaf

When you have a baby born deaf, it can trigger worry for parents. Two local families share stories on finding the right solutions for their kids. 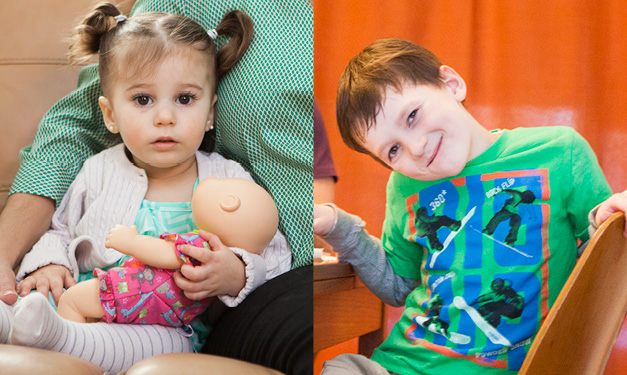 Rolan Sundberg of Southfield was only a few days old and already facing an important test – one that would shape his life. The infant was undergoing a newborn hearing test, something that would reveal if he had a hearing impairment.

It’s a test that the Michigan Department of Community Health made mandatory in 1997 and is now administered by all state birthing hospitals and centers. The goal is to identify infants who are deaf or hard of hearing as soon as possible, so parents can pursue early intervention for their child and prevent potential speech and language delays.

The importance of this was something that Rolan’s mother, Teresa, knew all too well.

She was born with conductive hearing loss in her right ear. She wears a hearing aid when the situation calls for it. She is also an educator for the deaf and hard of hearing, having taught deaf children early in her career. In recent years, she has been working as a teacher consultant in Macomb County. In this role, she works with deaf and hard-of-hearing children, their families and their teachers to assist that child in fulfilling his or her full potential in the classroom.

And so she was well prepared and informed when Rolan didn’t pass his hearing test and when the follow-up test with an audiologist confirmed that Rolan, 9, was born profoundly deaf.

Getting a diagnosis and help

Sundberg recalls bumping into her mentor soon after learning about Rolan’s deafness and taking away some helpful perspective.

“When we ran into each other, the news was still so raw, and I remember talking about options for Rolan with her,” she says. “My mentor reminded me that no matter what, I was his mom first. When I would be advocating for him, I needed to do that as his mom, not solely as someone with professional experience in the field.”

Within a week after Rolan was born, Sundberg also received a call from a woman with her own deaf child. She was reaching out on behalf of Michigan’s Guide By Your Side Program, which pairs families just learning of their child’s hearing loss with another family who has a deaf or hard-of-hearing child and who can thus relate to the questions, concerns and options before the family.

Since then, Sundberg has also found support and assistance in the Michigan Chapter of the Alexander Graham (A.G.) Bell Association for the Deaf and Hard of Hearing, of which she currently serves as president. The association was started by Bell himself in 1890 and takes the stance that children with hearing loss can develop the ability to listen and speak if their education begins early and they can make maximum use of their residual hearing. To that end, the association supports the use of listening and spoken language devices.

When Rolan was just 3 weeks old, he was outfitted with hearing aids. By the time he was 13 months, he received a cochlear implant, an electronic device surgically implanted in the ear. According to A Guide to Resources for Family and Providers, published by the Michigan Department of Community Health’s Early Hearing Detection and Intervention Program, the implant transmits auditory information directly to the brain, bypassing damaged or absent auditory nerves.

“When the audiologist first turned the implant on and Rolan could hear some initial beeps, he looked up to see where the sound was coming from,” she says. “Then the audiologist turned it on, so that he could hear our voices. He looked up at us like ‘Wow!’ Later he sprinted down the hall, and I called his name. He stopped and turned around. He heard me, and it was incredible.”

Sundberg’s experience is very different from that of Christina Harucki of Royal Oak who was born deaf, married a fourth-generation deaf man and has a hearing son, Lucas, who was 4 when this article originally published, and a daughter, Chloe, 20 months when this story was originally published, who is deaf. Harucki is fluent in American Sign Language (ASL), as is her husband and both of her children.

Rather than pursue a technology-based route like cochlear implants, the Haruckis have embraced ASL and active involvement within the deaf community.

“What tends to happen now is that when a child is born with a hearing loss, the parents react with grief and shock, which is common,” she explains. “They feel overwhelmed and want to accept a miracle right away, which would be to have their child’s hearing back. Of course, the first people they talk to are the medical professionals who often refer them to see an audiologist or an ear, nose and throat (ENT) specialist, who in turn usually recommends cochlear implants on the spot.

“They may not be at fault, but they normally do not have a cultural awareness of deafness and that a deaf culture does exist. Research has proven over and over again that ASL is a visual language that is 100 percent beneficial for all babies, especially the deaf ones,” she says. “Unfortunately, the majority of deaf babies are being denied the opportunity to learn ASL due to the fear that it will prevent them from picking up speech, which is almost always the first choice. Parents do not realize that it is OK to learn ASL and develop speech skills at the same time, and that it is even better to do both if capable.”

Harucki and her family have found great assistance in another local organization known as DEAF Community Advocacy Network (DEAF C.A.N.!), a nonprofit organization providing casework, advocacy, interpreting and early intervention services to people who are deaf or hard of hearing.

“We are staunch supporters of ASL,” says Marcy Colton, DEAF C.A.N.!’s executive director. “We feel that language is critical, whatever the language is.”

Colton likes to share the story of a co-worker who is fourth-generation deaf and whose husband is, as well.

“When they had their baby, the audiologist came in to share the results of the baby’s hearing test and she made a sad face and mimed a tear coming down her cheek,” Colton says. “My friend remembers thinking ‘Why is that sad?’ Their daughter has had language from the time she was born and is now a successful 18-year-old who is graduating high school with high honors.

“There exists a very vibrant deaf community that does not perceive itself as needing to be fixed. Most deaf children are born to hearing parents. We feel the best thing a parent can do is tell their children they love them and give them their language, their culture and their community.”

When cost is an obstacle

Deciding which route to pursue for a child born deaf or hard of hearing is a choice some families do not make in a timely fashion – if at all. Phil Wells is the executive director of the Lions Hearing Center of Michigan, a nonprofit organization based in Detroit that seeks to assist children and adults who are deaf and hard of hearing and who may not have the financial means to secure necessary hearing tests and equipment such as hearing aids.

Wells’ organization has a partnership with local experts to facilitate a newborn hearing care program, offering follow-up testing and care for those who fail a hearing screening at birth, the site notes.

“Two years ago, 60 to 70 percent of the families with an infant who did not pass their newborn hearing screening at Oakwood did not go on to pursue follow-up testing,” Wells noted in 2014. “Since we became involved, that percentage is down to 10 percent.”

Wells says his staff now calls every family whose child did not pass the screening to encourage them to pursue a re-check. He notes that sometimes a barrier to families doing so has simply been transportation.

“If that is the case, we provide transportation for the families, so they can bring their child back,” he says. “We’re making lots of headway.”

Another resource that parents of deaf or hard-of-hearing children strongly value is family workshops and events, Wells notes. At one workshop put on for families by the Lions Center, Wells found himself smiling when he observed parents interacting with other parents who have children who are deaf or hard of hearing.

“They were exchanging phone numbers and talking about different camps they might send their children to,” he recalls. “They learn so much from each other. It’s so important that parents connect with other parents who can relate to their situation.”

“For Rolan, this was so great,” Sundberg says. “He is one of two kids in his whole elementary school with hearing loss. The more he is around other hard-of-hearing kids and adults with hearing aids, the better for him.”

While Sundberg acknowledges she and the other members of the A.G. Bell Association share a different perspective from a significant faction of the deaf and hard-of-hearing community, she believes they all share the common goal of doing what they feel is best for their child.

“When new parents learn their child may be deaf or hard of hearing, my advice is this: Just put your arms around that baby, love him or her, and be there,” she says. “Learn all you can, so you can make the best choice for your child.”

For parents in search of resources for their child who is deaf of hard of hearing, click here to find a list of organizations and information.