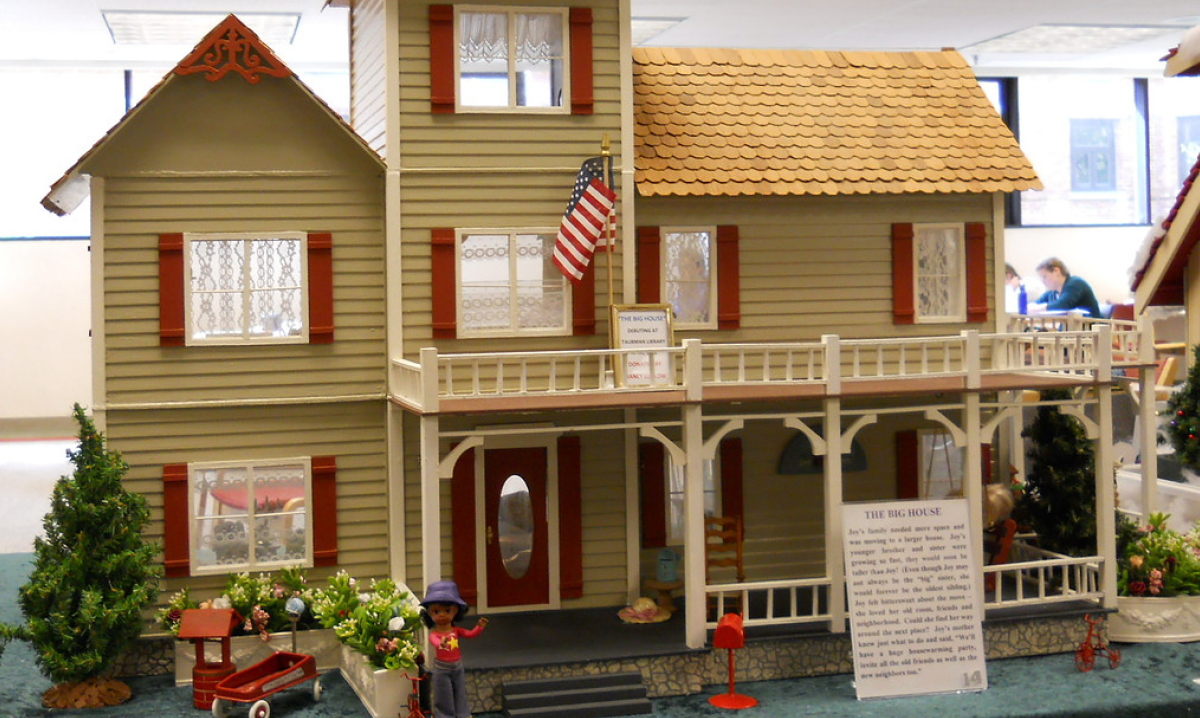 Having a rare medical condition can feel big and overwhelming, but it can help to break things down into smaller pieces.

That’s exactly what Jennifer Wakenell, 30, of Livonia does with her Turner Town Project exhibit – currently on display at the Livonia Civic Center Library from Oct. 25, 2018 until March 3, 2019.

“This unique display is a collection of dollhouses that tell the story of a girl” who has both Turner syndrome and nonverbal learning disabilities, Wakenell explains. “The main heroine, Joy, is that girl – and the scenes follow her life from birth to young adulthood.”

Along the way, those who visit the exhibit get a “snapshot into characteristics” of Turner syndrome, highlighting the challenges, assets and strengths of those with the condition.

Wakenell, who’s a licensed social worker and works with Boys and Girls Club of Southeastern Michigan, was diagnosed with Turner syndrome herself just before entering high school.

And with the Turner Town Project, which she first created in 2005 as a Girl Scouts project, Wakenell aims to bring awareness to a disease that, she notes, even most educators and physicians still don’t know much about.

What is Turner syndrome?

This chromosome condition affects girls and women. It occurs in about 1 of every 2,000-4,000 live female births, according to the Turner Syndrome Society of the United States.

The syndrome is “caused by the complete or partial absence of the second sex chromosome,” TSS’s website notes. In other words, women typically have two complete X chromosomes. Those with Turner syndrome, however, are missing all or part of the second X chromosome.

Females with this condition most commonly have shorter height and lack ovarian development, TSS adds. They also can have heart, liver, thyroid or kidney problems, among other issues. Genetics plays a role in which symptoms and characteristics emerge.

In Wakenell’s exhibit, dozens of dollhouses bring Turner syndrome to life through a child’s eyes – all the way up through adolescence and the young adult years.

Turner Town travels around to different public locations – mostly libraries – for people to view for free.

Each house includes a storyboard that details some of the obstacles the little girl, Joy, faces – both medically and academically – at various points in her life.

“We are continually adding new scenes to spotlight,” says Wakenell. “We’re now gearing towards more adult storylines.” Next up are scenes with Joy’s college professor – designed to show girls with Turner syndrome that they, too, can attend and thrive in college.

Wakenell describes the dollhouses as “fixer uppers” and a project that she and her family work on together.

The first two dollhouses she inherited from her mother’s aunt – and then she accumulated more dollhouses through donations and garage sales.

“We currently have 28 doll houses and scenes,” she says. “There are also specialty scenes like a farm, theater, circus and tree house” Additions as of late 2018 include a Thanksgiving house, medical camp and cider mill.

The exhibit also includes photo collages, a resource guide, a measuring station, educational information and a place to vote for your favorite house or story.

“There are interactive activities and games for people too during the exhibit,” Wakenell says.

“Some of the situations that we have in the exhibit are based on my life,” Wakenell says, “and other parts are based on other women I’ve met at conferences, camps and research studies.”

Many of the storylines show viewers what everyday life is like for someone with Turner syndrome and nonverbal learning disabilities. It also gives their families and friends ways they can help.

“We try to focus on positive aspects, too,” Wakenell says. “We definitely hope people can learn about these conditions and grasp coping mechanisms for someone with these conditions.”

The town also focuses on other nonverbal learning disabilities and how young people can focus and thrive with these conditions in a school setting – “showing things such as extra time on tests, note takers in the classroom with them and sitting in front of classroom to limit any distractions,” Wakenell says.

Where to see the town

Keep an eye on the Turner Town Project website to see where this large exhibit will pop up next. It’s previously been at local libraries in Canton, Dearborn, Dearborn Heights, Farmington Hills, Livonia, Plymouth, Redford, Wayne and Westland, along with a few schools and community centers.

It also makes an annual cameo at the Turner Syndrome Society of the United States’ annual conference, Wakenell says, which typically happens beyond Michigan.

“This is something that me and my family do. It’s kind of our personal mission,” Wakenell says. “We make the arrangements and work on our campaign during our free time, so that would vary how long it’s on display.”