Meet the southeast Michigan boy that competed against braille readers across the United States and Canada in 2014 – and took the top spot. 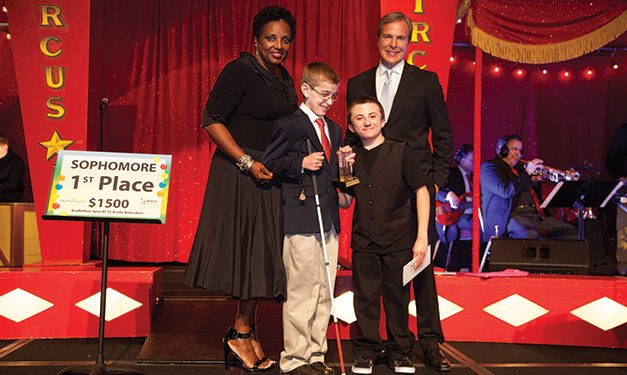 With technologies like audiobooks, is Braille a thing of the past? One of the winners of the national Braille Challenge doesn’t think so.

Griffin Miller, a fifth grader from West Bloomfield, competed against Braille readers across the U.S. and Canada – and won. So who is this kid, and why isBbraille so important to him? We chatted with Griffin and his mom, Rachel, to find out.

Griffin can play the piano and guitar and speak four languages (including English). He likes books with funny scenes. His favorite subject, however, is math. He studies high school pre-calculus and can recite over 400 digits of pi.

“I think one time mother said I get my years and my grades mixed because I’m 12 years old and doing 12th grade math,” he says.

“Reading Braille is being literate,” Rachel says. So when Griffin was diagnosed as blind at 2 months old, his family began teaching him the alphabet with magnetic letters and the “bumpy alphabet” with Braille labels.

Griffin says he doesn’t remember much about learning Braille, but mom recalls he learned quickly and could say the alphabet backwards at 22 months.

Griffin began competing in the Braille Challenge, which is hosted by the L.A.-based nonprofit Braille Institute of America, in second grade after his Braille teacher asked if he would like to enter.

The challenge tests reading, writing and speed and accuracy skills. Last year was the first year Griffin hadn’t placed. So he practiced and, this year, won a trophy and $1,500, which he’ll probably save. “I’m the saver in the family,” he says.

“I think it’s really important that we know how to read and write. That way we know what we’re doing,” Griffin says. Of learning Braille, he adds, “Keep trying. Like everything, you’ll get it eventually, (but) that will take some time.”