The ‘Wonders’ of Dress-Up 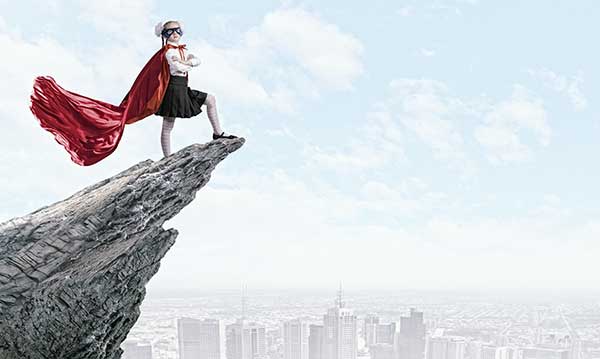 I was a HUGE Wonder Woman fan growing up. I watched the TV show starring Lynda Carter each week. I bought comic books in which she and her invisible plane were figured prominently. And, in what is perhaps the greatest marker of my fandom, I dressed up like her. Not just for Halloween, but for fun – in the middle of a summer day or a random rainy Saturday. That’s true adoration, right?

I didn’t have a Wonder Woman costume, so I had to improvise. I wore a pair of blue underwear on the bottom and a pair of red underwear became an off-the-shoulder top, of sorts. Yellow rubber rain boots and some faux gold bangles from my mom’s jewelry box almost completed my transformation. Almost. My super short, curly hair, which I hated, was far from Wonder Woman worthy, so I wore a T-shirt over my head and let the body of the shirt drape down my back to give me the sensation of flowing Wonder Woman locks.

I’d run around the house like this, looking obliviously ridiculous and utterly absorbed in my mission to battle evil forces. My most prevalent foe was an invisible army of geckos that were trying to kidnap my cat, Calico. She’d eaten one of their kin and they were out for revenge. In full transparency, Calico was known to kill a gecko now and then, but I think the gecko community took it in stride or were not fully aware of her carnage. But no matter … the fantasy friction provided me hours of fun.

That’s what playing dress up can do. In this month’s cover story, “Dress-up Delight,” we write about the big benefits in letting kids have access to some dress-up duds. It doesn’t have to be fancy. In fact, it may even be better if it’s something that the kids cobble together on their own, like wearing underwear as a shirt. But the idea is allowing them the freedom to take on a persona any time of the year – not just Halloween – and see where their imaginations lead them.

Shove some cast-off clothes into a plastic tub or old chest and tell them it’s all theirs. Sure, they could use a dress up app to shift the appearance of some digital princess or pirate, but that wouldn’t be nearly as fun, creative – or embarrassing to look back on decades later.