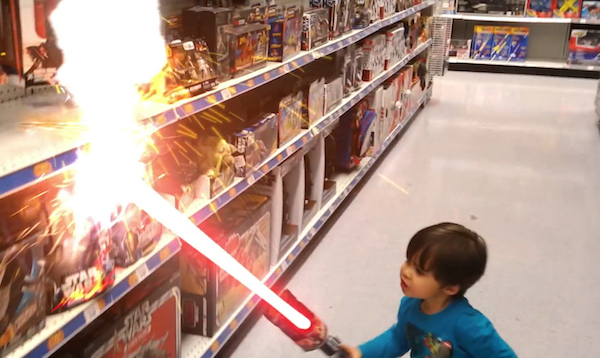 Not only do they get to make kid flicks. But apparently, guys who animate stuff for a living also kick butt in the cool-dad department. First there was Josh Cooley of Pixar and his bodacious picture book on R-rated films. Now, by viral power and special-effects prowess, Daniel Hashimoto of DreamWorks has rigged it so his own kid is starring in “movies.”

Well, really, they’re just every-day 10-second clips of his 3-year-old son, James, a mop-topped little rug rat doing stuff that toddlers do – like playing around at breakfast, testing out a blaster at Toys R Us and jumping in puddles at the hardware store. Only Hashimoto is an Adobe After Effects whiz kid who, on his YouTube channel dubbed Action Movie Kid, brings his boy’s imagination to life.

Or blast off into outer space when it’s really just a plain-old McDonald’s play scape.

How about make a crazy Duplo-style contraption that can take down the Death Star itself? (Take that, Vader.)

And my personal fave, which finds dad in some hot water (“Don’t worry,” Hashimoto assures in his description, “I found him in the plumbing section later.”)

The laser blasts, ka-BOOM explosions and, in one case, Matrix-style freeze frames are sure to make you grin. So will his description on YouTube: “My 3-year-old kid is awesome. He gets into some epic situations which remind me that life is an adventure.”

And James? Predictably, the tyke totally loves it, reportedly telling dad, after watching one of the mind-blowing scenes, “Did I really do that for realsies?” according to an interview a humble Hashimoto gave Daily News (read it to also find an adorbs photo of father and son in Kermit shirts, too – they’re both fans).

For extra awesome points, Hashimoto, who’s been involved with big-name flicks like Kung Fu Panda 2 and How to Train Your Dragon, sounds like he’s also working on tutorials, so other tech-attuned parents can turn their kids into super heroes, too. Talk about killing it as a dad.

Celebrate the season by reading one of these festive children's books.
Read more
Health