The Reasons Toddlers Act So Crazy 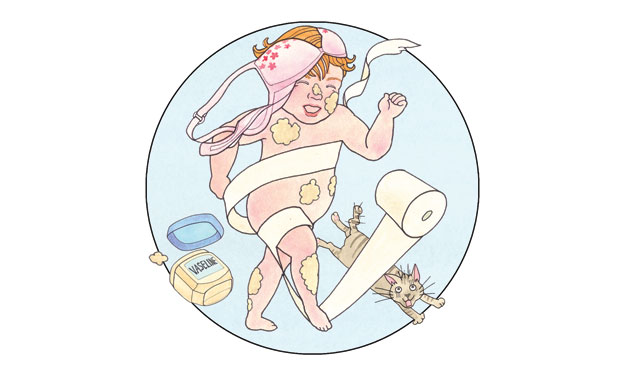 Sandy Sedlar of Dexter found her youngest son slathered in Vaseline. It was Nolan’s naptime, and mom was running on the treadmill.

“He somehow got in my master bathroom,” she recalls, “got the Vaseline off the top shelf and used about 75 percent of the container to ‘style’ his hair, hands, face, legs, walls, carpet, bed and stuffed animals.”

From nose picking to streaking, tykes do some crazy stuff. But while it seems strange or messy to adults, it’s rite of passage for kids.

Reasons for the nuttiness

“Toddlers are notorious for their ‘unconventional’ behavior, and this behavior is usually normal,” says psychologist Marcie Zoref of Birmingham.

Sedlar sees her share as mom of two boys. “I had my first child take off his cloth diaper and ‘finger paint’ with his poop,” she says of son Brendan. “He was so proud of his art I didn’t know what to do!”

Zoref says, “Toddlers are very interested in their environment and are known for touching things, exploring and asking a lot of questions.” Also, she explains, toddlers don’t have the same sense of shame, guilt or “superego” as adults do – the critical/ethical/moral sense that tells us right from wrong.

“Toddlers are also learning about their emotions and how to communicate their needs,” Zoref adds. So when they get frustrated, act out or throw a tantrum, they could be trying to tell you something with limited language.

“She gets on the ground, crawls around and will bark at people,” Redding says. Taylor, 3 1/2, may also lick a person’s hand. “It usually happens in unfamiliar situations,” says Redding. “Her first time at a daycare or at a store if somebody talks to her.”

While this is typically normal, Zoref says, be careful not to unknowingly encourage it: “Negative attention is still attention and could reinforce the behavior.”

Encourage your toddler to talk about how he’s feeling, find ways to help him identify and process emotions, set limits and offer alternative coping methods.

“Remember, you are their model and are shaping their behavior,” Zoref says.