Tips to Improve the Relationship Between Father and Son

A recent study found that dads of toddler boys aren't so attentive. Find out why and get tips on how to work on your relationship between father and son. 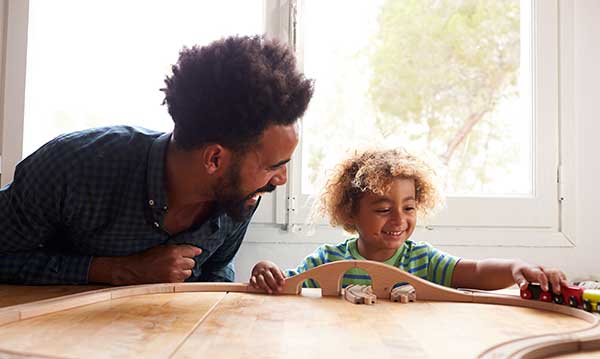 Hey dads, do you help mom with junior’s food and potty-training duty? If not, you should probably start.

In addition to taking a little bit of the child-rearing load off of mom, changing diapers and pitching in with feeding could help you improve the relationship between father and son. And, according to research, that is something that most dads need.

It also found that dads of daughters responded to their child’s cry for them more than dads of boys. And dads of sons were more likely to engage in rough and tumble play with their boys and less likely to use language to reference their son’s bodies.

Though the study couldn’t pinpoint the reason for this trend, it did prove that there are some gender biases when it comes to parenting. So, how can you identify if you’re guilty of treating your sons less than your girls and what can you do to encourage that father-son bond? Dr. Eric Herman, a Clinical Psychologist at the Children’s Hospital of Michigan and father of twins, one boy and one girl, weighs in.

According to this local doc, father-kid bonding is important, especially in the child’s formative years when they aren’t necessarily flocking to dad.

“In general, (in the younger years) mom is the one that kids are closest with and later on, once the kids are a little less like babies, the dads kind of jump in and want to do stuff with the kids,” he explains. “That trust and that early connection (with dad) is important, but you have to be emotionally available.”

Though it is most beneficial if a child has a positive relationship with both parents, multiple studies and online sources have found that sons that have a healthy relationship with their fathers tend to develop better language skills and are less likely to engage in delinquent behavior than those that have a poor one.

Most dads likely want to develop this relationship but simply don’t know how, Herman adds.

“I think that nurturing sort of tends to be more motherly (and) dads might feel like they don’t know what to do or what to say, so they leave that to mom,” he explains. “(But) in terms of being available to the kids, dad can do whatever mom can do.”

How to do it

Starting the process of building the relationship between father and son can be as easy as stepping in for mom during lunch or bath time.

“You just need to be there for your kids; do stuff with them; help them and be involved,” Herman says. “If you’re involved then the kids know that you’re reliable.”

In addition to taking care of the child’s needs, NBC News also suggests roughhousing with your older kids and praising them for their academic and physical achievements.

You can also find out what your child is interested in, like dinosaurs or being outside, and plan a day around it.

“Dads can change diapers, feed them, take them to doctor’s appointments, play dinosaurs or read a book with them. It’s all about what the kid is into,” Herman says.