The Importance of Parents Admitting Mistakes to Teens

Admitting you're wrong is difficult, but teens need to hear parents admitting mistakes. Here's why it's healthier for everyone. 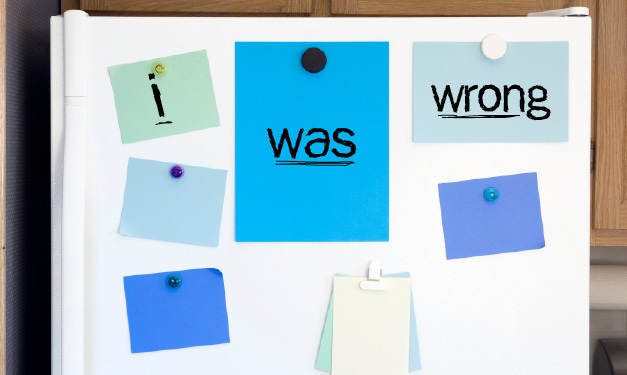 Parents aren’t perfect – we make mistakes. When our kids are small, they quickly dismiss our blunders, convinced of our superhero status. They write essays titled “My mom’s the best!” and shout “My dad’s stronger than your dad!” on the playground. We can do no wrong.

But the teen years take down superhero parents like kryptonite. Suddenly, we’re held to every slip-up, bad decision and character flaw. It seems we can do no right. But if you do make a mistake, here’s why it’s really important to fess up.

Good intentions don’t prevent parents from making mistakes that belittle, betray and alienate teens. We yell when they bring the car home late (again). We search their rooms or read their texts because we worry about who they hang out with. We push harder when they say they’re flunking math because we believe they can do better.

The adolescent’s world “is rich in insight and complex connections; it’s also full of ambiguity and mixed messages,” says Michael Riera, Ph.D., author of Staying Connected to Your Teenager: How to Keep Them Talking to You and How to Hear What They’re Really Saying. Teens struggle for clarity amid confusion, and their growing cognitive skills make them especially good error detectors.

With lightning speed and laser-like precision, teens spot the difference between what parents say and do – and they point it out. Don’t worry: Your teenager isn’t out to get you. She’s just showing you she’s a perceptive thinker, willing to argue until she’s blue to defend her beliefs.

‘Fessing up is hard to do

Admitting mistakes isn’t easy. Parents are likely to deny, rationalize and justify what went wrong for several reasons, says Carol Tavris, Ph.D., social psychologist and co-author of Mistakes Were Made (But Not by Me).

To begin with, we feel lousy when our behavior conflicts with our beliefs. Psychologists call this “cognitive dissonance.” Because yelling at our kids is out of line with our self-concept as good, capable and caring parents, it’s hard to admit we messed up, says Tavris. We’re more likely to justify: “I had to yell to get the point across,” “She deserved what she got for breaking the rules,” or “He knows I love him.”

Worse, justifying our errors leads us to see what we believe. If you think your teen will make poor decisions, or fear wayward peers will influence him for the worst, you’ll unconsciously seek supporting evidence. This “confirmation bias” justifies your previous actions and sets you up for repeating the same old mistakes.

Parents may fear admitting missteps will diminish their authority. But this couldn’t be further from the truth. Adolescents don’t want parents who are experts. What they want, says Riera, are parents who embrace the role of consultant. Teens need to know they can count on us to stick with them as they explore new experiences and confront challenges on their own terms.

The price of admission

“Admitting mistakes doesn’t come easy … even in our smoothest relationships,” says Michael Gorsline, parent coach and family therapist in Portland and author of the Awareness * Connection blog. While you may feel less like a superhero on the inside, you’ll build credibility with your teenager by ‘fessing up.

Teens lose trust in parents who won’t admit they’re wrong, especially if the errors are obvious. Wouldn’t you? Admitting mistakes restores that trust and communicates respect for your teenager and your relationship.

When you say “I was wrong and I’m sorry,” you set the right example, reminds Tavris. It’s important to take responsibility for our mistakes, apologize for them and then learn from them, so we do not repeat them. Teens’ fears of punishment, embarrassment or rejection make it hard to admit their mistakes, too.

A deep connection with parents makes it safe for teens to admit wrong or hurtful actions and to grow from their experiences. They need to learn that making mistakes doesn’t mean they are bad, stupid or unlovable. It just means they’re human. By admitting your mistakes, you can show them that you are, too.

Continue establishing the connection and building your relationship by working on communication and listening skills with your teen, too.

Have you tried this tactic of admitting your mistakes? Have you notice its impact on your relationship?

This post was originally published in 2010 and has been updated.