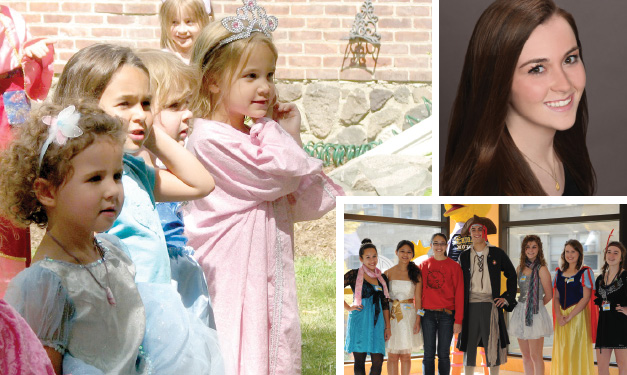 For a few hours, sick children changed into fancy and fearless characters. And Braeleigh Apley, the Ann Arbor high school senior who made it possible, is getting big props as a result.

Her “Princess and Pirate Day” earned her a nod as a top youth volunteer in Michigan as part of the national Prudential Spirit of Community Awards announced for 2012. Braeleigh, 17, is recognized as the winner in the southeast Michigan area. Shayna Wierenga, 13, of Grand Haven is the other winner. Both honorees have a shot at national recognition.

Braeleigh created and organized an unforgettable November day at C.S. Mott Children’s Hospital in 2010 – from recruiting 20 teen volunteers (and training them in patient safety and security) to creating games and goodies for kids. Her goal? To alleviate some of the anxiety little patients can experience during their stays.

Dressed in full princess and pirate costumes, Braeleigh and her crew helped children make fairy houses and treasure islands – and paraded through the halls, singing and laughing. Children got their own hats, wands, swords, capes and eye patches (even patients confined to their rooms received fairy-delivered gift bags). And Braeleigh funded it all with money earned from a summer “Princess Camp” she’s hosted for girls at her family’s home since she was 9.

“I think it is important that we never lose touch with the imaginative side of (our) lives,” Braeleigh said in a statement, “especially if it can bring happiness to those who are suffering.”

Her school, Greenhills School in Ann Arbor, nominated her. She and Shayna both received $1,000 awards, engraved medallions and a spring trip to the nation’s capitol – which includes a gala awards ceremony at the Smithsonian’s National Museum of Natural History and visit with their congressional rep on Capitol Hill.

Now in its 17th year, The Prudential Spirit of Community Awards, run by the financial services company, represents the country’s largest youth recognition program “based solely on volunteer service.” One high school and one middle school student is recognized from each state, plus Washington, D.C.