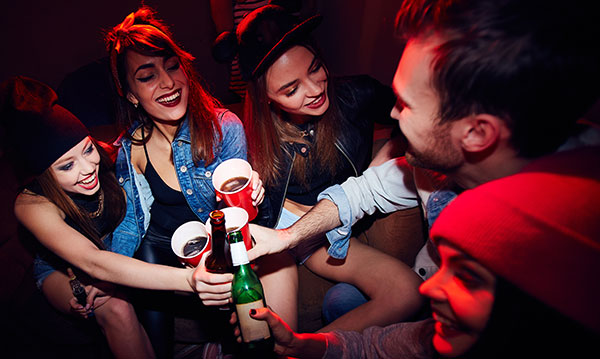 It sounds like a scene from a movie: The parents are out of town, the kids plan a small teen house party and then it gets wildly out of control until the cops show and break it up.

But that scene became a dangerous reality for a local teen in Plymouth Township when her parents were gone and word of her party spread on social media, ClickOnDetroit.com reports.

Soon, about 400 people were at the house. When police arrived, one girl was found unconscious but breathing and needed to be hospitalized. The house was “destroyed” inside with cabinets ripped off the wall and damage throughout.

Dozens of alcohol containers were found, too, and the smell of marijuana was so strong that officers had to stop and go outside for fresh air, according to reports.

Plymouth Township police Chief Tom Tiderington told Hometownlife that the 16-year-old girl wasn’t supposed to be having a party.

“A party can start out with five, 10, 20 people, but once it gets on Twitter or wherever, the house fills up quickly. Next thing you know, she can’t do anything,” he said in the article.

While police are still considering possible citations and planned to meet with the girl’s parents, the incident serves as a reminder to parents everywhere of the dangers of leaving teens home alone and how quickly things can escalate in the age of social media.

Plymouth Township police Sergeant Bryan Rupard says the department is glad the story is being reported on. “I think it’ll wake up a lot of parents, especially ones that travel quite a bit and leave their kids home alone,” he tells Metro Parent. “It kind of reminds them of the horrible things that could happen.”

Parents should also know they’ll be legally accountable for anything that occurs at a party at their home, even if they aren’t home and didn’t know about the party.

“The parents are responsible,” Rupard says, pointing out the possibility of sexual assault, fights or drunk driving incidents. “If (a partier) crashed and killed somebody, those parents can still be held responsible for that death.”

In Michigan, there is no law setting a minimum age for a child to be left home alone overnight. While it may be unavoidable for some families, Rupard says it’s best to take teens along on trips whenever possible or designate a responsible adult for supervision.

“If they’re under 18, I would definitely not leave them alone, myself,” he says. “I would have a relative or a responsible adult that is willing to kind of claim them for the days or weeks that the parents are gone.”

If you do need to leave your teen alone while you’re out of town, make sure your neighbors are aware of the situation and keeping an eye out.

“If they don’t know their neighbors, I would get to know the neighbors and let them know this is where we’re staying, these are our telephone numbers, if you see anybody at the house or go in, please call us or call the police,” Rupard says.

Check with your local police department to see if they offer “vacation checks” to people who are away. In Plymouth Township, officers will drive by the house during the day and/or at night – even if your teen will be home or you have someone house-sitting.

Either way, you can notify police that you’ll be out of town and leave your contact information in case anything happens.

Surveillance cameras that can be monitored remotely can also be helpful both indoors and outdoors. And if you’re leaving a teen home alone, any firearms and alcohol must also be secured, Rupard says.

The role that social media played in spreading word of the Plymouth Township party is also a reminder to parents to keep watch over their children’s accounts. Teens should have no expectation of privacy, Rupard says.

“Their parents are responsible legally for everything that they do under the age of 18,” he says. “I tell parents: Put tracking software on their phones, monitor their phones, get their passwords to their social media. I realize kids can be creative, they can still open up new accounts – that’s why it’s important to continually monitor what your kids are doing.”

And if your teen does get into a situation that gets out of hand? They should know it’s OK to call the police for help.

“If kids screw up and next thing you know you’ve got tons of people, I’d rather us go over and disperse it and close down the house,” Rupard says, vs. the teen letting it become even more out of control for fear of getting in trouble.

Set clear, firm expectations for your child if he’ll be staying home alone.

“I would make it very strict to the child that there are to be no (friends) over,” Rupard says. “Not even one friend. One friend can lead to 400 with social media.”

“Teens will often do what they think they can get away with and, when there is peer pressure, they take more risks,” she says. “However, if a parent taught their child self responsibility by setting up appropriate guidelines and enforcing natural consequences appropriate to their child’s age and development from a very young age, I believe this problem would not of occurred.”

Children need to be taught respect for themselves, respect for property and others and responsible independence, she says. This includes accountability for their actions using natural consequences.

“Having a clear, consistent parenting plan of morals, values and respect is essential to the child’s success,” Cooke says. “Once a situation occurs, I see it as a parenting opportunity to teach the child life lessons and consequences to their choices rather than a situation of ‘getting the child off from’ being responsible for their choices.”