Margaret Beaudoin was born paralyzed on the left side of her body. But her disabilities haven't stopped her from excelling in sports 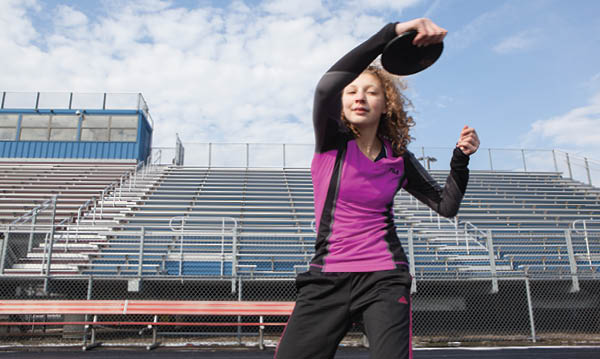 Running is a natural fit for Margaret Beaudoin. The 15-year-old Berkley High School freshman found a passion for it in first grade, and has gone on to set new personal records each year in her various track and field events, including the 100 meter last summer.

Accomplishments aren’t the only reason she keeps competing, though. When she’s dashing down the track, she doesn’t notice her tight left hip, calf and ankle quite as much – or how those difficulties with her muscles have impacted the alignment of her knee.

“When I’m running, I feel like my knee isn’t turned in as much and I’m running faster – and it helps me a lot,” she says.

Margaret has what’s called hemiplegia, a type of cerebral palsy that caused paralysis to her left side. While still in the womb, she suffered a pediatric stroke that damaged her brain. “For people with hemiplegia, their gait is better when they run than when they walk,” mom Christine McNish adds. Simply put: “It just feels good,” Margaret says.

Although she doesn’t have much use of her left side (her arm is more affected than her leg, mom notes), Margaret has gone on to participate in a multitude of track and field events, including the 100, 200 and 400 meter runs, plus long jump, shot put, discus and javelin in adaptive sports competitions around the country. This past fall, she was named a 2015 U.S. Paralympics Track and Field High School All-American athlete – one of only 66 in the country – for her long-jump distance of 2.29 meters (that’s roughly 7.5 feet).

“A lot of kids with physical disabilities – or just in general – they kind of become couch potatoes,” McNish says. “The sports, it’s made a huge difference. It’s good for her. When she’s in sports she’s in a much better mood. She’s just happier.”

When Margaret was 6 months old, McNish started to notice little things about her baby that seemed different – like the immobility in her left hand. “She was stubborn enough, she wanted to hold her bottle by herself and she couldn’t. She was resting it on her hand or pushing her fist against it and we’d try to open her hand, and we couldn’t get her to.” And, mom recalls, she was only bouncing on one leg in her exersaucer. “It was like, slowly you realize – because she used (her leg) a little bit, because her leg isn’t as bad as her arm.”

A pediatrician referred the family to a neurologist. “He told us she probably had a stroke in utero,” mom says. “We didn’t have an MRI to confirm it until she was 14 months.”

According to the Children’s Hemiplegia and Stroke Association, or CHASA, the “risk of stroke is highest in the first year of life and peaks during the perinatal period (a few weeks before and after birth)” – and these strokes cause neurological problems in 60 percent of kids who survive, including hemiplegia and hemiplegic cerebral palsy. The risk of having a stroke for kids and teens birth to 19 years is about 5 per 100,000, notes the organization, which designates May as Pediatric Stroke Awareness Month.

As time went on, more complications from the stroke began to show: seizures at age 5 (Margaret still takes epilepsy medication) and, at 8, when she was struggling to read, it was vision problems. She has half vision in both of her eyes, McNish explains, called hemianopsia.

“It’s a little bit hard,” Margaret says. “It’s hard for me to focus and all that.”

McNish says that’s due partly to Margaret’s vision and partly the damage the stroke caused to her brain. Because of Margaret’s eyesight, she’s constantly scanning, McNish says. A loud, crowded classroom can cause a lot of distraction. And just imagine walking through a busy high school hallway.

Physically, “I can’t use my arm and my leg that much,” Margaret says. “So at one time I had to have a brace and I’ll probably have to have it again” – because of the way her foot rolls inward, mom explains.

Yet her disabilities haven’t held her back. “She never ran into walls, she never tripped and fell, she climbed ladders and went down slides and jumped off docks and pools into the water,” mom says, which is why it took a while to discover some of Margaret’s complications. That’s how well she’s always compensated for her disabilities; something McNish thinks led to her talent in sports.

On having hemiplegia: “It’s different from everyone else, but I don’t really care because I run. I do everything basically that everyone else does,” Margaret says.

Always an active child, Margaret started playing soccer at 5. She’s tried basketball, tennis and bowling, too – and she currently loves swimming, waterskiing and kayaking. She even downhill skis in winter.

She started running with a running club at Burton Elementary School, and in fourth grade she picked up track and field with Shrine of the Little Flower – cross-country with Our Lady of LaSalette, too (until it became too tough on her knee).

“With track she was getting frustrated, because they would have all these heats and she was always last,” McNish says. The family started focusing on her personal times rather than the places.

But it got mom thinking: “Having known a lot of kids with CP and pediatric stroke survivors, she’s running fast.” Through a local friend who also had a son who survived pediatric stroke, the family found out Margaret’s times qualified her for a national competition – and, in 2011, they got 11-year-old Margaret to the Thunder in the Valley Games, a regional competition for athletes with disabilities in Saginaw and a regional Paralympic qualification event. One month later, she went to National Junior Disability Championships, also hosted in Saginaw that summer.

“When she was 14, she set a national record in the javelin,” McNish says.

Last summer, she went to the National Junior Disability Championships, now known as Junior Nationals, in New Jersey. She set a national record for discus in her class, and her long-jump distance earned her the U.S. Paralympic High School All-American award for track and field in T37, the cerebral palsy classification.

Playing sports has helped Margaret physically. Over time, it’s replaced physical therapy. She’s been able to go without a brace on her leg for a long time because of her now-strong leg muscles, mom says.

Margaret’s looking forward to competing with the Berkley High School Bears track and field team this spring – and maybe, if all goes well, she can experience the adult Paralympic time trials in Charlotte, North Carolina, mom says (Margaret jumps in, “Shhh! Don’t jinx it!”).

The Berkley teen has friends all over the country thanks to her travels competing in adaptive sporting events.

“We just met some amazing people there, and the program … it’s a lot of camaraderie,” McNish says. “It’s not as hyper competitive as other things are because I think everybody’s been through a lot, whether they’re amputees or in wheelchairs or blind or dwarf or with stroke or (traumatic brain injury) like Margaret has. Everybody is just kind of cheering each other on – all the families cheer each other’s kids on and the kids help each other out.”

Margaret has in the past attended a CHASA organization retreat, teaching other kids with similar disabilities about track equipment. In her downtime, she loves to “chill out,” watch movies, browse Facebook, attend sporting events and go shopping. “Typical teenager things,” McNish says.

As for the future? Margaret has a big dream: “I want to go to the Paralympics in 2020 in Tokyo.”