Closing the Loophole Battle with Your Tween

Is your tween using your own logic against you? These so-called loophole battles might be frustrating for parents. But here's why they also might be a good thing. 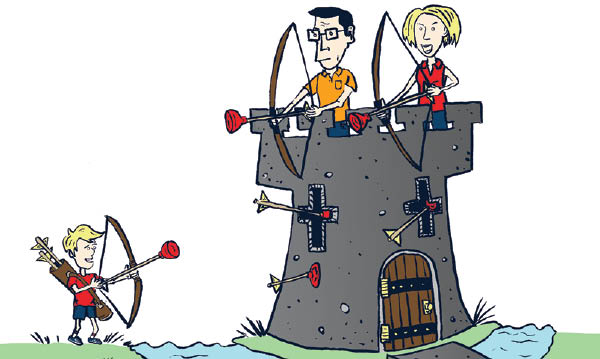 When your sweet child transforms into an argumentative little person seemingly overnight, you know you’ve entered the tween years.

“Part of this developmental stage is testing their limits and challenging their parent’s rules,” he says, which often translates into children trying to find loopholes in their parent’s logic.

These “loophole” battles arise when a child moves from concrete thinking to abstract thinking at about 9 to 12 years old, Young says.

“It allows them a new ability to plead their case or find creative ways to argue the rules,” he says. “Emotions run very high at that age and they don’t have the ability to modulate their opinions and to self-regulate.”

Young says a common trigger for this behavior is when parents attempt to impose rules on their children, such as limiting video game hours.

“They might feel that they’ve done their homework and not violated any other rules,” he says. “They circumvent their parents’ logic by saying, ‘You and dad are watching a lot of TV or surfing the net.’

“The tween child might try to prosecute his or her case by finding contradiction in the parent’s own behavior, and that’s the so-called loophole strategy.”

To deal with this behavior, Young suggests revisiting rules and “modernizing” them as your child grows. “It’s OK to concede the point sometimes. It’s hard work for parents to be consistent,” he says.

At Henry Ford Health System in Detroit, child and adolescent psychologist Greg Oliver says he had a client whose son once decided that instead of doing his homework when instructed to, he would do it on the bus in the morning instead – only to find it too loud and bumpy to complete it.

“He thought he knew better and got a ‘zero’ on the assignment,” Oliver says. “They get to the age where they think they know better, and they have some of the pieces but not enough to put it all together.”

Oliver says one way to address the behavior is to walk through the child’s logic together. He also says giving a child a warning period could help him or her prepare for the conversation.

“A parent could say, ‘OK, we need to talk about your homework assignment from yesterday’ and then leave for a minute,” he says. “A little bit of heads-up can give a kid a bit of time to deal with it, and the child might be strong enough to admit the truth.”

Is it something more?

Young stresses that this behavior is a result of a child’s mind growing more sophisticated and is perfectly normal in most cases. That said, sometimes it’s a sign of a bigger problem.

“I think that there’s a subgroup of children who exhibit this behavior in extremes,” Young says. For children with oppositional defiant disorder, or ODD, loophole behavior is taken to the limit. “They will reflexively negate what the parent says. The parent says, ‘Let’s go!’ and the child says, ‘Let’s stay.'”

Young says it’s important to distinguish between typical cases and those with problematic opposition, since extreme cases represent a small number of kids – less than 5 percent.

Though the constant arguing can get annoying, Young says to take a step back and appreciate how your child is growing.

“Just admire your child for having the intellectual ability to challenge you,” he says. “It’s a part of normal development – you don’t want to quash your child.”