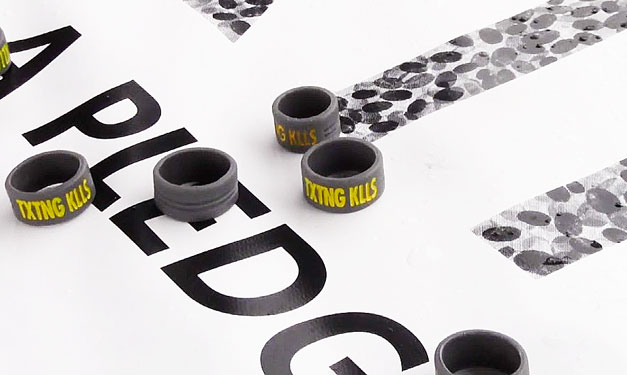 Fumbling with her cellphone, Nihle Abusbeih, then 17, tries to steer her car with her left hand. It’s raining. Her eyes dart up and down. “I can’t drive with one hand,” says the Dearborn teen. Then, thunk.

Luckily, she’s only hit a cone. But, as Nihle learned at the 2012 Allstate Teen Safe Driving Challenge in Detroit, it could have been far worse.

Right before school started, about 10 metro Detroit kids – all part of ACCESS, a Dearborn nonprofit that offers youth programming for at-risk kids – tried navigating a professional closed course while talking on the phone, texting and dealing with rowdy drivers.

Real dangers on the road

It’s serious business: Some 10 percent of drivers 15-19 years old involved in fatal crashes were reported to have been distracted while driving, the National Highway Traffic Safety Administration reports.

And these local kids quickly realized why.

“I think I hit 20 cones. It wasn’t good!” admits Reina Shields, 17, also of Dearborn. “I want to be a better driver. I’m easily distracted.

“This just kinda proves that it can be dangerous.”

Her mom, Anne Ramirez, got an up-close view from an in-car web cam. “It was so scary,” she says. “I could see her being so distracted. My nerves are so shot! I hope she learns to (drive safely) with no one watching.”

That’s precisely the goal of the program – which was founded in 2008, says Allstate driving instructor Jeff Maher, and made its first southeast Michigan stop at a Comerica Park parking lot in late August of 2012.

“Teens and adults alike are guilty of it,” Maher says. “It’s natural to everybody to pick up the phone. This is all real-world stuff.”

The first time, kids steered distraction-free. Then, they took a call. Next, texting. Finally, they had to deal with hyper passengers.

Like a peppy Allstate agent riding shotgun in Nihle’s car, who showed off photos on his smartphone, fiddled with the radio – “Put a different song on! Can you turn it up?” – flipped the driver’s visor down, reached over to honk the horn and shouted “Say cheese!” before shooting a pic of poor Nihle.

It’s not too far from reality, says Borhan Muthana, 16, of Dearborn. Does he think his peers are great drivers? “Not really,” he says. “They try to act cool by speeding up, racing and all that stuff. And texting.”

That last one is a huge cause of accidents – not to mention illegal – and part of the reason Allstate created “X the TXT,” a pledge that teens and families make not to text and drive. On the course, kids had to try to answer four simple text questions. “It was really difficult,” Borhan says.

Like most kids at the event, he’s only had his license a few months. But it was a sobering lesson.

The takeaway for teens

Drivers are often shocked by their performance, Maher says.

“A lot of them think, ‘I can do it,'” he says. “Sometimes it’s subtle, sometimes it’s drastic. They really they get woken up to the dangers.

“They all leave going, ‘Wow, I don’t think I’m ever going to do that again.'”

The goal is to spark a family conversation. Before kids grab the keys, sit down and discuss where they’re going – and how focused they are.

“Being really emotional can affect your driving skills,” Maher says. “That’s what we’re to drill home here, is you have to be totally aware when you’re driving. You cannot be distracted at all.”