A new study shows teens need their parents around more than they might let on, so how can you be there without overdoing it? Check out these tips on being a "potted plant" parent. 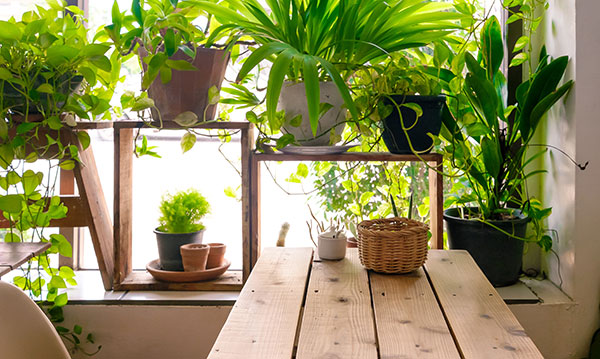 Feel like your tween or teen doesn’t really want you around much? It’s not unusual for parents to get that impression, but don’t let it fool you.

While the average teenager may find it hard to pry herself from her phone or emerge from her bedroom to spend time with mom or dad, it turns out she might need you nearby more than you think.

A study found that teens really do benefit from their parents’ subtle yet sturdy presence in their lives – in other words, a mom or dad who is a “potted plant parent,” notes a report by The New York Times.

The study, done by the University of Western Australia, looked at 3,000 middle- and high-school kids – including 618 adolescents with a parent who lived away from home for long stretches of time due to work – to find out how the extended absence of a parent could affect the child’s emotional and behavioral health.

While most adolescents still felt their parents were present in their lives even despite the absence, a slightly higher percentage of these teens did have emotional or behavioral problems.

And other studies have shown higher rates of emotional distress in teens who regularly come home to an empty house after school or don’t have parents with them at dinnertime, the Times notes.

It all reinforces the idea that a potted plant parent – one who is present and available but blends into the background – is ideal for teens.

This comes as no surprise to local psychotherapist Theresa Cooke with the Great Lakes Psychology Group, which has multiple locations in southeast Michigan.

“It is my experience in working with teenagers that they do need more than they let on,” Cooke says.

How to be a ‘potted plant’

So how can you be a potted plant parent for your teen? Start with routines and consistency – even if you can’t be home every day after school or for the perfect family dinner.

“Routines, rituals that are consistent are at the core of what children need,” Cooke says. “It brings them connection, bonding and a sense of belonging and a knowledge you care.”

To bolster this focus on family structure, parents with especially busy schedules often find that texting and FaceTime are great ways to stay in touch.

“It is a good idea to check in with the teenager on a regular and consistent basis to let them know you care and you are concerned about their welfare and their needs,” she says. “This gives them a feeling of security and keeps you connected to them.”

Social media is another way to stay connected, including apps popular with teens such as Instagram and Snapchat.

“However, there is a fine balance of being there as a parent and invading your teenager’s privacy and interfering,” Cooke says. “A parent should be an observer and fade into the background as the ‘potted plant’ in these areas.”

Today’s parents may find themselves in the “potted plant” role even more than other generations.

“It is my experience that teenagers today feel they need their parents less and less,” she says. “Technology has taken over for most of their ‘how to’ and ‘what if’ questions – from cooking to sexuality questions, the internet and YouTube has it all at their fingertips.”

Remember that your adolescent still needs your love, care and attention – even if less of their time is spent being “directly parented.”

“If a parent has ‘parented’ their child appropriately, teaching them independence and self esteem/confidence, by the time the child is a teenager they should not need much on-site parenting,” she says. “Parenting should be available on an ‘as needed’ basis by the time a child is a teenager. However, the parents should always be consistent and available.”

Another way of looking at the potted plant parent idea is switching the roles, Cooke says.

“I kind of see it the other way around,” with the teen being the potted plant who is independent as long as its needs are met, she says.”As a parent you provide them with food, shelter and a quality environment.

“So unless the teenager shows a need then you observe them, keep watch from a distance and check in with them once in a while and let them know you love them and are available if they need anything.”

As another example: “Kids are like dogs – you have to give them a lot of attention,” Cooke suggests. “Teenagers are like grown cats. They roam around the house ignoring you and when they want attention they are in your face making a lot of noise.”

If you have problems

It’s important to keep in mind, though, that blending into the background as a parent doesn’t mean accepting it if your child is shutting you out completely.

“I consider this a symptom that there is problem with the relationship and the child is either saying, ‘You are too much in my face’ or ‘I feel rejected from you so I am going to reject you back.’ Either way, it is a warning sign to explore,” she says.

Consider your own potential role in the communication breakdown and see if it helps to make some changes. If not, try a heart-to-heart talk with your teen or even ask other family members to get involved, Cooke recommends.

If you continue to have problems, it never hurts to seek professional help.

From Kings Island to Medusa's Slidewheel and more, here a few last-minute excursions to enjoy with the kids before the new school year.
Read more
Tweens & Teens

As teens get older, they might make friends with an older person — maybe even a young adult. Is this OK, and what rules should you enforce if you allow it?
Read more
Advice