How to Handle Delicate Teen Self Esteem

As early as first grade, self-doubt bubbles up. Here's why and what to do. 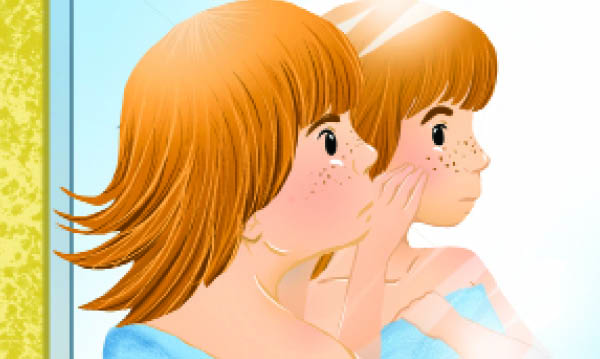 It’s no secret tweens can be self-critical. But these symptoms can actually pop up much earlier – in slightly more subtle ways.

“It’s an internal process that starts it,” says Eric Herman, a limited-license psychologist with Children’s Hospital of Michigan in Detroit. It intensifies in middle school: “Mostly, this has to do with puberty.”

Hormones do up the ante. So what’s up with pre-adolescents?

As first experiences with school, sports and activities ramp up, kids are building self-confidence, PBS Parents notes – and also comparing themselves to others.

Frustration and fear can emerge “when a classmate or sibling seems ‘better than me’ at a task,” the website says. Kids can also get overwhelmed and focus on that pang of self-doubt, especially while learning new skills during a basketball practice or dance class – to a point where they lose track of what they can do.

Self-image is a factor too. After all, kids as young as 5 express dissatisfaction with their bodies, a 2015 study by nonprofit Common Sense found. Herman notes there are a few telltale signs that crop up over time:

How to help kids

“It comes with experience,” Herman says. That said, there are a variety of effective ways parents can help kids get re-centered.

For starters, “Avoid overreacting,” he says. “A lot of it is normal behavior. Just listen.” From there, teach kids to “‘zoom in’ on both strengths and challenges,” PBS Parents notes, vs. a “wide-angle lens.” For example, point out your child is great at dribbling a ball, but can’t quite do a layup yet (and, luckily, the coach can help).

Along those same lines, Herman suggests parents offer reassurance and positive feedback. Point out and praise when your child masters a tough math problem, writes a great sentence or nails a plié in ballet or scissors a soccer ball like a pro.

Reframing negative self-talk helps, too. Kids can counter an “I’m bad at math!” with an “I’m working really hard on my homework,” PBS Parents notes. This sort of “growth mindset,” as it’s often called, focuses on the effort vs. the bottom-line grade or score.

It’s also important for kids to get affirmation from other adults, he says. Kids may feel their parents are biased and seek positive feedback from teachers, coaches or other adult family members.

Keep that in mind for your child’s teammates and friends, too, as they’re likely going through the same issues and looking for a “good job.”

“Kids learn criticism from their parents,” Herman reminds. Whether it’s other people in your life, celebrities or even strangers, check your critiques. Remind kids everyone has good qualities and try to focus on those, instead.

“We need to have forgiveness about us,” says Herman.

If a child hears you saying something bad about how someone else looks, for instance, they might find a way to turn that on themselves.

Flip that around in how you talk about others and, of course, your children. They have plenty of talents and, no matter how small, those are important.

And remember: Those talents flourish with practice. Help kids keep their eye on the process and progress – and not just the “prize.”