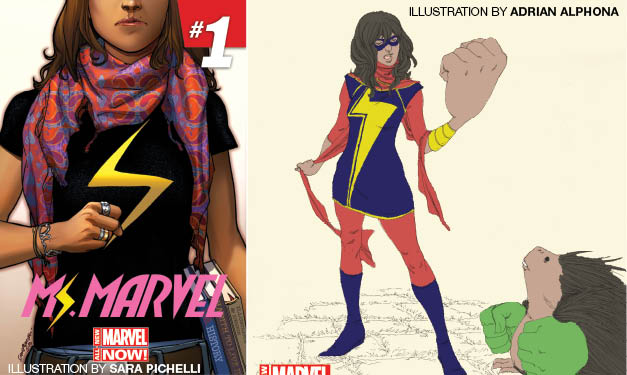 A fictional girl from Jersey City, N.J. debuts as Ms. Marvel this month. And this 16-year-old’s ability to body morph isn’t her only standout. Kamala Khan is also Marvel’s first Muslim character to headline her own comic book. By design, this Pakistani-American teen has a “dual identity,” says the book’s acclaimed writer G. Willow Wilson – even beyond those super powers.

“Like a lot of children of immigrants, she feels torn between two worlds,” Wilson says in a Marvel Q&A: “the family she loves, but which drives her crazy, and her peers, who don’t really understand what her home life is like.” Wilson explains she wanted Kamala to be relatable – especially for young women – and she “drew heavily” on the experiences of high school, a Marvel release says.

While Kamala doesn’t wear a traditional hijab headscarf, she captures a group with a historically strong presence here in southeast Michigan.

“It’s a step toward mainstreaming the Muslim community,” says Victor Ghalib Begg, senior advisor at Michigan Muslim Community Council in Royal Oak – who notes there are 1.5 billion Muslims with a “presence in every corner of the world.”

It also spotlights females. “So many Muslim women have been heads of state,” Begg adds, also pointing out that media has often portrayed a “covered-up” image. “Now, you see a superhero.”

Underscoring this is a universal tale about a kid whose “parents’ high expectations come with tons of pressure,” notes Marvel. “It’s for all the geek girls out there,” as Wilson puts it, “and everybody else who’s ever looked at life from the fringe.”

Series editor Sana Amanat adds, “This story isn’t about what it means to be a Muslim, Pakistani or American,” calling those elements “cultural touchstones.”

Still, Begg says if Kamala is “a spark to learn more” about Muslims, “I think that’s wonderful.” This Ms. Marvel comic drops on Feb. 5 and retails for $3.99 (print and digital). Find it at local comic stores and Marvel.com.