More college freshmen are admitting to getting behind the wheel under the influence of marijuana than alcohol. It's a trend that could have deadly results. 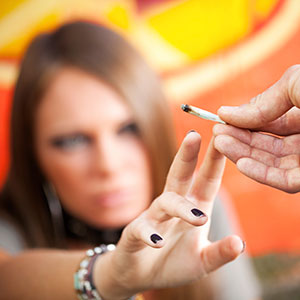 Everyone knows about the dangers of driving drunk, but what about the hazards of driving high? A recent survey by JAMA Pediatrics found that more teens admit to driving under the influence of marijuana than they do to driving while intoxicated.

JAMA surveyed 315 college freshmen, ages 18-20, from two “large public universities” and discovered one in five students admitted to using marijuana in the last month. Of those, nearly 44 percent of males and 9 percent of females said they drove after using pot, but just 12 percent of guys and 3 percent of young women admitted to driving while drunk, The Boston Globe reports.

Younger teens aren’t immune, either. About 19 percent of high school teen drivers admitted to driving under the influence of marijuana, according to a 2012 study by Liberty Mutual Insurance and SADD (Students Against Destructive Decisions) – compared to 13 percent who reported mixing alcohol and driving.

Substance-abuse experts, including those here in southeast Michigan, worry about the lack of education regarding the risks of being high behind the wheel.

“Drinking and driving has been drilled into the heads of everyone as being dangerous, but the same cannot be said for smoking and driving,” says Ray Dalton, the outpatient program coordinator at Dawn Farms, a nonprofit addiction rehab facility in Ypsilanti, which hosts monthly two-part Teens Using Drugs workshops. “There’s a negative stigma with drinking and driving, and there’s fewer teen drivers that drink and drive because they know it’s dangerous.”

Misconceptions play a part too, the LMI/SADD study notes: “Many teens don’t even consider marijuana use as a distraction to their driving,” it noted in a press release. Of those who’d driven after using pot, 36 percent felt it had no impact.

Compounding things, Michigan is one of 21 states with laws allowing marijuana’s use for certain “debilitating” medical conditions, under very specific rules. Marijuana’s limited legal status, along with the public debate over it, could also be fueling teens’ acceptance and “diminishing perception of the drug’s risks,” the National Institute on Drug Abuse notes.

Still, the consequences of driving high are evident.

Just last month, researchers from the University of Colorado School of Medicine reported that 10 percent of fatal car crashes in 2011 involved at least one driver who tested positive for marijuana – up from 4.5 percent in 1994, Science Daily notes.

The nature of the drug plays a role, Dalton says. Marijuana tends to stay in the user’s system much longer than alcohol and, often, the user has no idea the severity of impairment or that he is even impaired. Marijuana use also slows reactions speeds – a key for good driving.

“One example we oftentimes give is an actual case where an individual was acutely high on marijuana,” Dalton says. “They were starting to slow the car down because there was a woman with stroller in a crosswalk. She ended up dropping something and had to pick it up. The driver couldn’t process to stop quicker and ended up hitting her.”

For teens, marijuana use is particularly risky because their brains are not yet fully developed. Pair that with pot’s temporary side effects like loss of coordination, distorted perception and difficulty thinking/problem solving, TeensHealth notes, and it can be a recipe for disaster.

How can parents promote prevention? Talking to your teens is the first step, Dalton says. Educate them on the dangers of driving high – and underscore the fact that it’s still an illicit substance that carries legal consequences.

Remind your child that he or she has power as a vehicle passenger, too. “Most teen drivers say they would stop driving under the influence of marijuana (90 percent) or alcohol (94 percent),” LMI/SADD notes, “if asked by their passengers.”

And ultimately, whether or not you think your child might try marijuana, Dalton adds, establish clear expectations.