Teens and Messy Bedrooms: Tips on What Parents Can Do 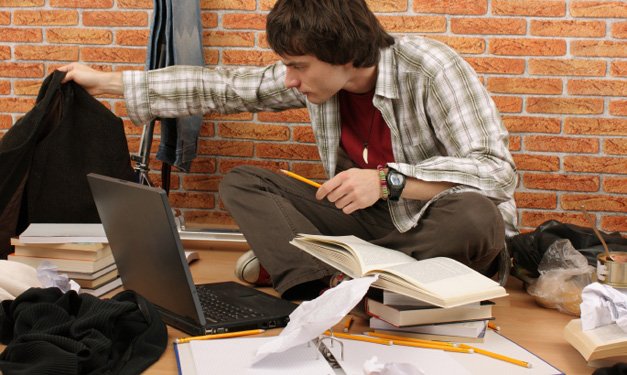 So, your teen is a slob. Join the club! My oldest is a quintessential pack rat – although his piles are not neatly distributed in a small hole. My son claims he knows where everything is in that nightmare he calls a room. He says that if I move something, he won’t be able to find it.

Find it? You couldn’t find an elephant in that mire!

When it looks as if an F5 tornado has struck your teen’s room and you’re exasperated beyond measure, sometimes it’s easier just to close the door. However, this might not be the best solution, because this doesn’t help your teen to learn how to organize his clutter. Charging in to clean it yourself, or simply ignoring the mess, won’t make the problem go away.

Dr. Robert Epstein, former editor-in-chief of Psychology Today and author of TEEN 2.0: Saving Our Children and Families from the Torment of Adolescence, says, “Teens are young adults, not children. Picture your teen as a young boarder in your home. How would you treat him or her if he or she were a slob?

“You wouldn’t take away the iPod or car keys; you would negotiate and try to stay calm. You might draw a line indicating where his or her messy territory stops.”

Get to the root of the problem

Sometimes it’s just an inability to purge memorabilia or a simple case of laziness. Or it may be a personality trait or an actual disability inhibiting his ability to organize. How bad is it?

If there is a “department of health” issue, with used string-cheese wrappers growing mold in his book bag or ants nesting in old candy wrappers under the radiator, an overhaul is necessary.

Is the state of his room and belongings affecting his life in a negative way? If your teen’s goals, commitments or grades are suffering due to his mess, then it’s time to insist on change.

Chances are he may need help, but it’s important for him to take ownership of this overhaul. Help him realize that the mess is making things more difficult for him.

Many teens don’t know where to begin, and their tendency to be impulsive doesn’t help either. Set realistic expectations – and don’t expect that he won’t have setbacks or need reminders.

Initial clean up should be done in stages. He can start with the floor; then move to the closet on another day. If the task is in manageable pieces, it will be less daunting.

“Be a great role model,” Epstein suggests. “Show them how to do it. Sometimes it’s helpful to take them shopping for organizational aids, such as storage cubes or shelves. Always watch for any signs, even small signs, of neatness – and praise and reward like crazy.”

Encourage responsibility in your teen, too. If your teen loses a pair of sneakers, have him purchase a new pair with his own money. Avoid rushing to his rescue when his lack of organization gets him into trouble. If he has to fix his own mistakes, he will be less apt to repeat them.

Brought to you by Humane Society of Huron Valley.
Read more
School Issues