FIRST PRINTED IN THE MAY/JUNE 2022 ISSUE

On the pitch, Nathan Steinwascher, the starting goalkeeper for Detroit City FC, is known as a brick wall — and after earning two back-to-back Golden Glove awards and posting 19 shutouts last season, it’s a well-earned title.

But it’s not his only one. This certified public accountant also has a full-time job with Lotito & Lazzara in Macomb Township, and he’s a husband and father to son Noah.

It’s all a labor of love.

“I’m doing what I love and I love everything that I do — I love kicking around a soccer ball midday, and then coming home, doing a little work, and at the end of the day spending time with Noah,” the Sterling Heights native explains. “For me, being present in every moment makes it all worth it.” 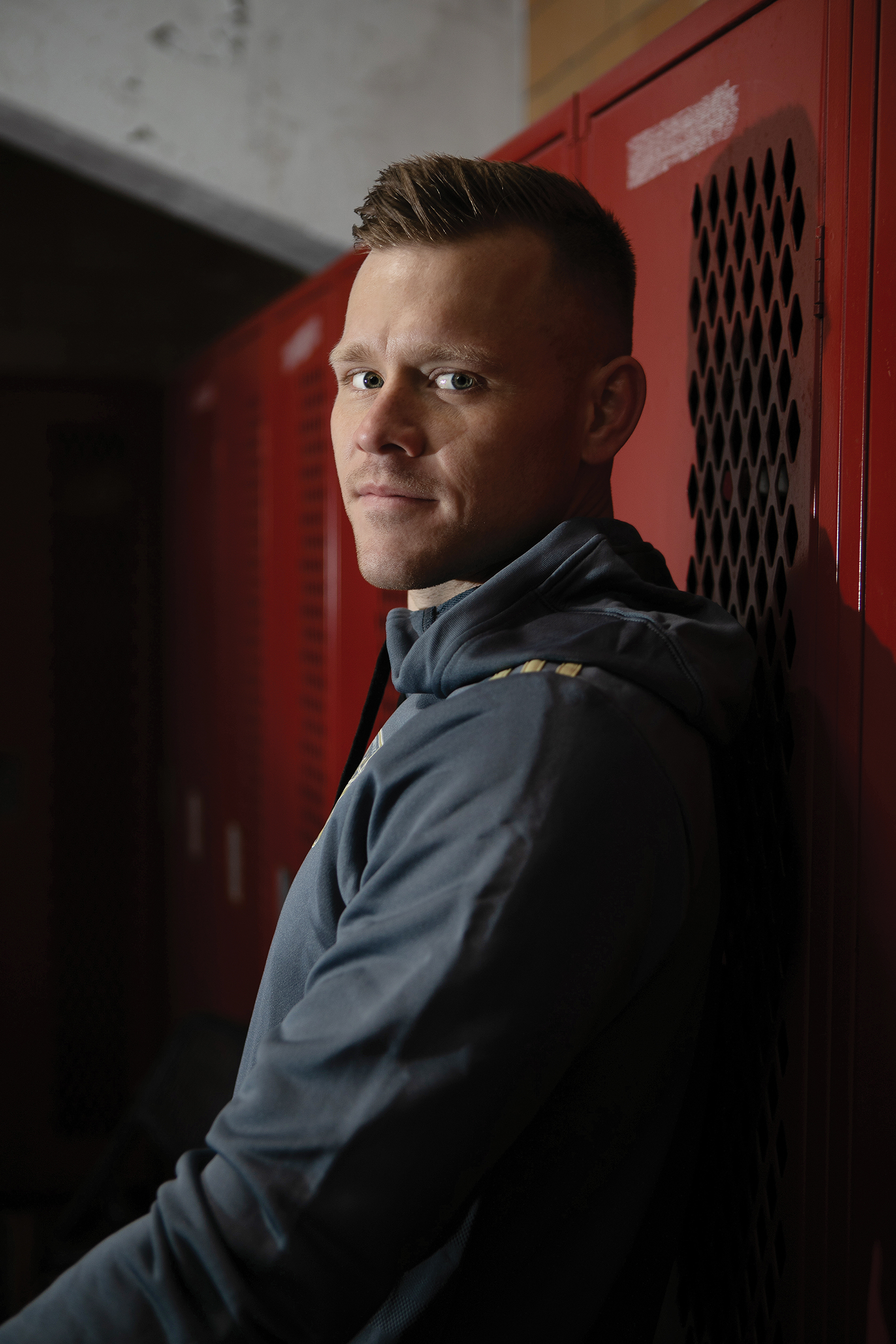 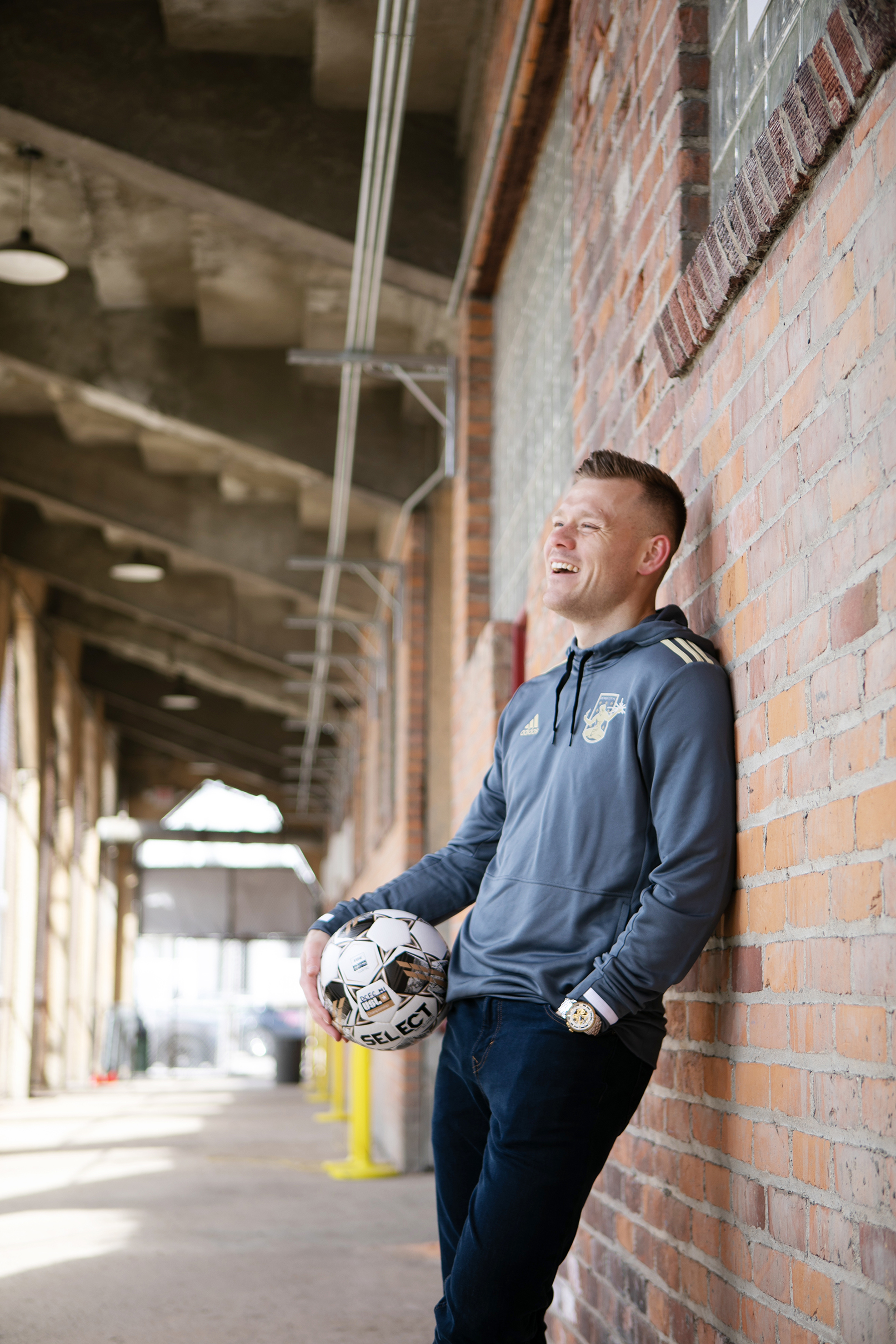 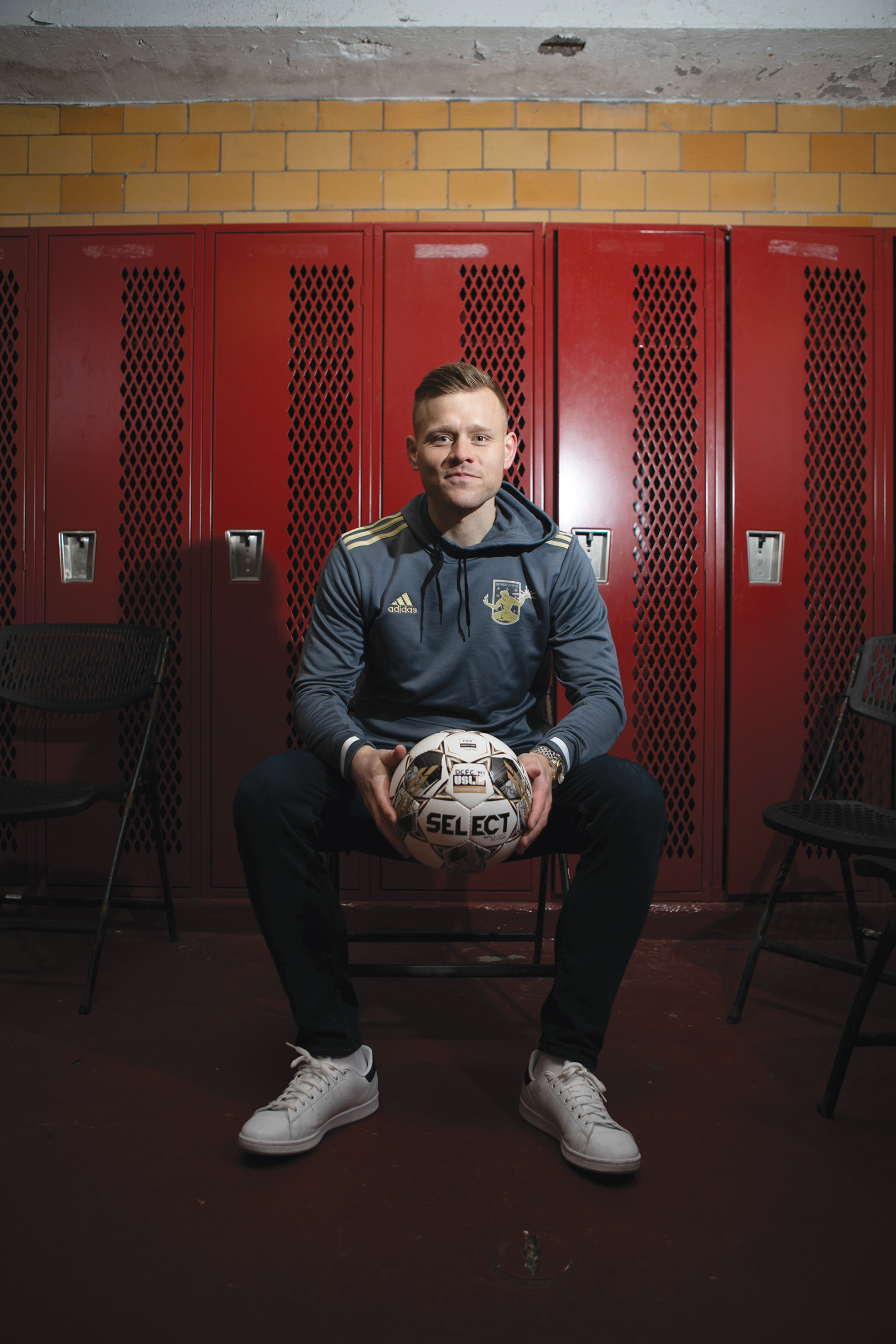 As a kid, Steinwascher dreamed of being a professional soccer player. After all, he had been playing the sport practically from the moment he started to walk.

“My dad grew up in Peru (and) his family had a big background in soccer,” he says.

He found his skill in the net around 11 or 12 years old when a friend on his youth team needed heart surgery and his team needed someone to step in as goalkeeper.

While holding onto his soccer dreams, he decided he wanted to become an accountant. “I always thought I’d do something with numbers and math because I enjoy numbers and math, but at the same time, I knew I wanted to be the best soccer player I could be,” he says.

He earned a soccer scholarship to the University of Detroit Mercy, where he earned his accounting degree and trained with Detroit City FC, in 2012, before playing for the Michigan Bucks until 2015.

In 2016, he came back to Detroit City as their keeper.

“I was trying to play pro, but didn’t get any looks,” he explains. “It was two weeks before they played, they were looking for a goalkeeper and I was in the right place at the right time. I had always followed Detroit City and thought it was a great opportunity.”

Today, with a little bit of flexibility from both Detroit City and his employer, he’s a full-time professional soccer player.

“It’s a dream come true,” Steinwascher adds. “My journey to get here has been kind of unique. I don’t think you see too many people going into a career and trying to get back into (a sport) post-college, but just knowing how hard I’ve worked to get here is very rewarding. I love being a part of the environment and getting to go to work every day and getting to kick a soccer ball.”

What do you hope your son will say about having you as a dad one day?

“The most rewarding thing for me is if he takes the work ethic I put into everything that I do and enjoying what I do, if he can look back and say that he wants to enjoy what he wants to do for a living, like Dad did. I’d love for him to play soccer, but if he can do anything and have the same work ethic I have, that would be the greatest win.”

Your favorite part of playing for Detroit City FC?

“I get to do what I love every single day. I’m close to home and I get to play in front of my family and the supporters.”

Your most hated household chore?

“Doing the dishes, vacuuming the house, cleaning. I’m thankful Catie cleans a lot more that I do.”

“My dad’s mom, Abuela, she’s the best cook in the world. Any Peruvian food my Abuela makes is my favorite — and my mom makes really good Peruvian dishes, too.”

In September 2020, Steinwascher married his wife, Catie. They suspected Catie was pregnant on their honeymoon, and sure enough, they welcomed Noah in August 2021.

“I remember the first moment I saw him and it was just surreal,” he says. “It’s hard to put into words how much love you can put toward a child. He’s changed our lives for the better.”

The couple focused on learning as much as they could from their parents and really finding what worked best for them.

“The first three months of Noah’s life wasn’t easy,” Steinwascher explains. “(Babies) don’t really have a personality and all they’re going to do is cry, but you get to 4 to 6 months and they develop their personality and they start to smile. Those little things make the hard work and stress worth it.”

The family is finding a groove.

“It’s fun learning how to be a parent. He’s a little of me, he’s a little of Catie, (and) it’s fun to see the different parts of us that he’s starting to show,” Steinwascher says. “The relationship he has with Catie and me, it’s love for both of us but it’s different. With mom it’s comfort, but as soon as he’s with me, it’s time to play.”

He adds: “As much work as it is, and as hard as the sleepless nights can be, it’s all worth it.”

My Mantra: The Keys to Finding Joy

A metro Detroit mom shares the parenting mantra she lives by.
Read more

Ways to Use Family-Fun Activities to Teach Kids

Celebrate a Summer of Culture

From Pride to AAPI and Juneteenth, get your family out of the house to experience all that May and June offers.
Read more
Load more