6 Myths and Truths About ABA Therapy

Think ABA is just for autism or that it involves 'bribes'? Get the facts on this popular autism therapy from a local expert with Total Spectrum. 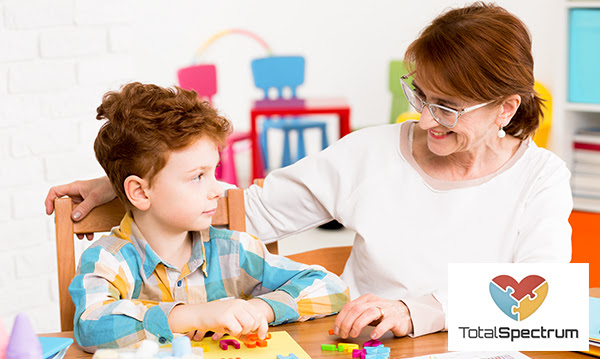 What’s the best way to support kids with autism? It depends on who you ask.

Between varying opinions on therapy types, educational interventions and even diets, parents can easily become overwhelmed by the options.

Applied behavior analysis, or ABA, the most common therapy used with children on the spectrum, is no exception. Families who haven’t tried it often only know what they’ve heard from friends or other healthcare professionals.

“There’s definitely a lot of misinformation,” says Jason Rockwell, BCBA (Board Certified Behavior Analyst), the Michigan Regional Manager with Total Spectrum, which provides in-home ABA therapy services throughout metro Detroit and beyond. “I think there are portrayals in popular culture that can contribute to that.”

Applied behavior analysis uses research-based principles about how people learn to bring about changes in behavior through targeted techniques and interventions. It has seen a major surge in popularity over the past several years, partly due to greater access and insurance coverage, yet many people still don’t quite understand it.

“Word of mouth can affect things,” Rockwell notes. But in truth, ABA is “very established.”

“It has the most research out there to support its effectiveness,” he says.

Here’s a look at some of the most common myths and misconceptions about ABA, along with the facts straight from a local expert.

Myth #1: Anyone can do ABA therapy.

Truth: Only Board Certified Behavior Analysts and trained technicians are qualified.

You can’t just hire anyone to implement ABA therapy, and you should be skeptical if a general education teacher or medical professional offers expert advice about it.

“In reality, in order to be able to effectively guide instruction and create a good solid, individualized program for a student, you should either be working with a BCBA or be one yourself,” Rockwell says.

And while frontline therapists are sometimes students, all technicians are specifically trained in ABA.

Myth #2: All ABA programs are the same.

Parents often assume that because ABA uses specific techniques, every child’s program will look the same. That’s not the case, Rockwell advises.

“I think we get kind of a reputation from some people that it’s just cookie-cutter type programming and it’s not individualized in any way,” he says. “Really, any good BCBA and any good ABA clinician is going to begin by trying to assess the child or the individual. We’re very data-driven.”

That means the individual child’s specific strengths and weaknesses will be evaluated and used to create a program that meets that child’s needs.

“That’s going to be the thing that drives the intervention,” Rockwell emphasizes. “It really requires meeting the individual where they’re at.”

Myth #3: ABA is only for young kids with autism.

Truth: It can be used with people of all ages and with other diagnoses, too.

ABA therapy isn’t just for kids and it isn’t only for people on the autism spectrum.

“In ABA we really try to get away from labels,” Rockwell says. “ABA can benefit people in a variety of situations.”

In addition to autism, Total Spectrum works with kids with Down syndrome, oppositional defiant disorder, ADHD and more. And while therapy with kids is most common due to the emphasis on early intervention, ABA has also been used with adults and even elderly patients struggling with memory loss.

“It’s not as prevalent as it is with autism but definitely it doesn’t have to be a 3 or 4 year old,” he says.

Some people argue that the rewards involved in an ABA program amount to offering kids “bribes” to behave a certain way. That couldn’t be further from the truth, Rockwell says.

“It’s not that I’m dangling the carrot in front of you then hoping you do it, it’s more about establishing what the request is we’re placing on the individual” and following through with rewards that can later be phased out, he says.

No matter the type of reinforcer used, it’s always paired with social praise.

“We do use edible reinforcers, we use activities like iPads, but really what we’re trying to do with those reinforcers is pair it with social praise,” Rockwell explains.

ABA therapy should never be associated with punishment. Instead, natural consequences are utilized and a major focus is preventing challenging behaviors in the first place.

“The vast majority of all ABA programming, no matter where you go or who’s doing it, there’s virtually no punishment being used,” Rockwell says.

If a consequence is needed as a “last resort,” it would be something relatively mild like taking away a preferred activity.

Scientific research has proven that the best ways to address behaviors are to change the environment to prevent it in the first place, or to find a strongly-preferred activity that the child will choose instead.

“What I always say is it doesn’t make any sense to use punishment because it doesn’t teach anything new to the individual, it only teaches what not to do,” Rockwell says. Instead, ABA wants to teach the child “what to do instead, what is an appropriate replacement behavior?”

Many people might picture an ABA session taking place at a table with a child being asked to label animals on flashcards, for example. But parents should know that generalizing skills into the “real world” should be the focus, Rockwell explains.

For more information on ABA or to schedule an evaluation, call 844-263-1613 or visit totalspectrumcare.com.