Are There Safe Fireworks for Kids? 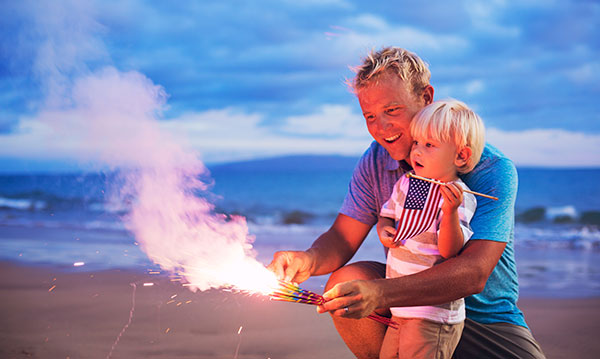 The word “consumer” tacked on to “fireworks” might give families the impression they’re completely safe to light off at home this Fourth of July and beyond. But Renee Zarr, CPSTI, Injury Prevention Education Coordinator with the Kohl’s Injury Prevention Program (KIPP) at the Children’s Hospital of Michigan, would have to disagree.

“The best thing and safest thing that I always tell families is to go to a public display,” says Zarr, who is also a mother of two.

Sure, you can buy fireworks on your own. In fact, the Michigan Fireworks Safety Act made it legal as of Jan. 1, 2012, to purchase and use consumer-grade fireworks, such as roman candles and bottle rockets.

But Zarr stresses the importance of parents taking safety precautions with fireworks – especially around children. “We’re allowed to have those as consumers, so (safety) is even more important now than ever.”

In 2013 alone, an estimated 11,400 firework-related injuries were treated in hospitals across the country, the U.S. Consumer Product Safety Commission reports. Kids younger than 15 accounted for about 40 percent of the injuries that year, according to the CPSC’s special study.

One of the many reasons Zarr suggests parents go to a public display is because of the danger fireworks pose. The injuries aren’t just caused by the larger fireworks. Even those sparklers on a stick aren’t OK for kids.

“Parents have a false sense of security with sparklers,” she says. A sparkler can burn anywhere from 1,200-2,000 degrees, according to sources like the CPSC and National Fire Protection Association. “That’s hot enough to melt glass and even some metals,” Zarr notes.

Sparklers could catch clothing on fire or cause third-degree burns, which means being admitted to the hospital. And they damage could require treatments like skin grafting. Zarr says many firework-related injuries are toward the face (eyes, hair and ears) or hands and fingers.

Aside from the risk of physical injury, fireworks can also start fires and damage property. The bottom line: “That firework isn’t predictable,” she urges. “It could shoot off in any direction. It could explode prematurely.”

If your family does decide to light off consumer fireworks at home, Zarr suggests following these safety precautions.

Don’t let children handle fireworks: “Children should never play with fireworks or help their caregiver light off fireworks.” Make sure you’re constantly supervising the kids, and that kids respect fireworks. “Explain to your kids that it’s fire, that they can catch your clothes on fire and can burn your skin,” Zarr says.

Be careful lighting them off: Make sure everyone is a safe distance away from the firework. Never light them off into containers or make your own fireworks, Zarr says. If you light a firework that doesn’t go off, do not try to reignite that firework. “It could be a pause in the firework … Or it could be that it’s a dud. You should never approach it and pick it up.” It could reignite.

Be ready to act: Always have a bucket of water or a hose at the ready to extinguish fireworks and flames. If a firework is dubbed a dud, douse it in water. If it has gone off, you should soak it in water thoroughly before throwing its remains in the garbage.

Be mindful: Zarr notes never to mix alcohol and fireworks. You may be having a good time, but make sure you’re sober. Also, be respectful of your family pets. The noises from fireworks might startle them, and pets could become standoffish or aggressive. Keep them calm and be aware of them, too.

In the event of a burn, avoid the wives’ tales and the ointments that will trap heat under the skin or could cause infection. Put the burn under cool, tepid water (not cold or ice water). “Hold it there for a few minutes. You want the burn to cool down slowly,” Zarr explains. Then dry with a clean cloth. If the burn is severe enough (blistering, broken skin, discoloring), seek emergency medical attention.

If anything gets into your child’s eye from a firework, do not let your child rub their eye, and don’t flush it out. “Go straight to the emergency room.”

For even more information on firework safety, visit the KIPP webpage at childrensdmc.org/KIPP.