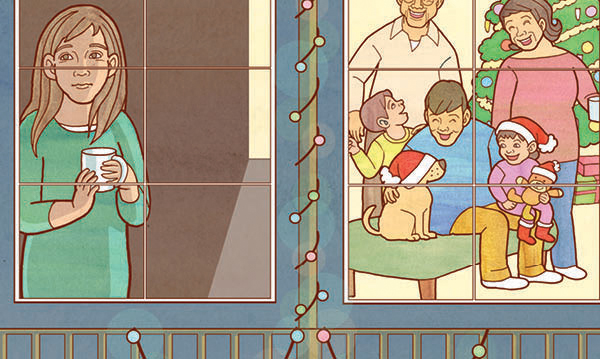 It’s supposed to be the most wonderful time of the year. Yet for many people, the holidays feel like just the opposite.

Stress, loneliness, fatigue and memories of happier times can make the celebratory season hard to bear. Developing signs of depression around the holidays is a common problem, experts say.

In fact, more than 64 percent of people reported being affected by the holiday blues in a 2015 survey by the National Alliance on Mental Illness.

Big parties, shuffled-up routines, crowded stores and the pressure to seem happy and cheerful can feel suffocating to those facing the blues. It happens among people of all ages and to those with and without a mental illness, says Crystal Palmer, the director of children’s initiatives for the Detroit Wayne Mental Health Authority.

“It can affect anyone. A lot of it can be sadness, being tired, being stressed,” says Palmer, a licensed master social worker.

Decreased sunlight and diet changes can also play a role in developing the holiday blues, along with lack of sleep and an irregular routine.

“The more you’re trying to juggle, there’s the opportunity to be more stressed,” Palmer says. “You’re just putting too much on your plate.”

Children can be affected, too, especially since their schedules are often disrupted by time off school, tagging along on errands and staying out later than usual at family gatherings. Just like adults, kids may feel the loss of loved ones more during this season.

“We have this expectation that it’s supposed to be the happiest time of the year. A lot of the time for people who have lost loved ones or there have been changes, that can have a great impact,” Palmer says. “There’s a lot of tendency to do reminiscing … they’re missing that family member, that friend, whomever it may be.”

And those with a mental illness may have an even tougher road to navigate.

“Someone who has a mental illness needs to be much more mindful of the fact that the holiday blues do occur,” she says. “If you know certain things are triggers, you either need to be mindful of them, have conversations with others or have folks checking in with you.”

Signs include sadness, tension, frustration, loneliness and isolation. Those suffering from the blues may be withdrawn, avoid social situations or have crying spells. If you’re dealing with the blues, know that there are ways to cope.

For starters, stick with a routine for you and your kids as much as possible between your holiday festivities. “For most of us, a routine is what keeps us going,” Palmer says.

Plan your schedule carefully and don’t overload it with events. Know your limits and ensure your family has enough downtime.

“Make sure we’re not pressuring them to do all of the same things,” she says, adding that some kids are fine with a hectic schedule while others need more time to regroup. “A lot of time people can recover from the holiday blues after a short period of time whereas depression would linger on,” Palmer says, but that doesn’t mean some people won’t need support to get through it. “I would definitely encourage them to seek mental health services. It’s not something you want to ignore if it continues.”

The tendency to downplay holiday depression means many people don’t get the support they need.

“Definitely take it seriously,” she says. “The reason we downplay it is because we have this perception that the holidays are supposed to be the happiest time of the year. Who wants to admit, when everybody’s supposed to be happy, that they’re not happy? It makes you look or feel like the outcast. And that’s not true.”

Don’t worry about bringing others down, Palmer adds. Lean on your support system and don’t let the stigma prevent you from getting help.

“Know that when you do have your circle of family and friends, it’s not about bringing them down, but it’s being open and honest about how you’re feeling,” she says. “I think if people truly knew you weren’t happy, they would want to reach you and help you in any way possible. You never know, somebody else could be feeling the exact same way.”