When is misbehavior a sign of something more? Find out the steps to get help for your child who acts out at home or school. 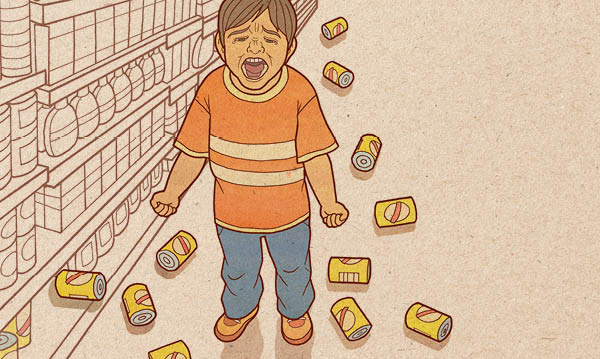 She might be labeled “the bad kid” in class. Arguments and tantrums are the norm at home, and getting the side-eye at family gatherings or out in public is nothing new.

Children who struggle to adhere to behavior norms face a difficult path toward assimilation that can be trying for the child and parents. Amidst ridicule and questions of proper parenting, the contributing factors to misbehavior are often overlooked.

In truth, brain-based disorders such as autism, ADHD, anxiety and other mood or self-regulation conditions are frequently the root cause of behavioral challenges in children, says Dr. Richard Solomon, a developmental and behavioral pediatrician and the medical director of the Ann Arbor Center for Developmental and Behavioral Pediatrics. Despite this fact, many believe these children are simply “bad.”

“There’s no question that the misbehaving children are often ostracized by their peers, they’re often blamed for their conditions, they’re seen as bad children,” Solomon says. “It’s especially common in children who misbehave who have disabilities.”

A common question parents have is how to distinguish between normal misbehavior and signs of a real problem. Misbehaviors are a developmental process and typically ramp up around 18 months to 2 years old – starting the so-called “terrible twos.”

Crying, whining and temper tantrums are all to be expected at this age, and it usually gets worse as kids get older and smarter – until about age 5, Solomon says.

“If all is going well, the majority of children begin to improve in their behavior by the time they hit age 4 to 5,” he says. “By the time they’re in kindergarten, most children are really pretty well behaved.”

After that, some kids will still struggle with behaviors such as yelling, tantrums, noncompliance or aggression – “then it gets a lot more complicated,” Solomon says. Parents with concerns should talk with their pediatrician about an evaluation for their child or seek out a psychologist, social worker or developmental pediatrician.

“If you’re seeing regular aggression – pushing, shoving, hitting, kicking, screaming, frequent temper tantrums – in a school-age child, that’s very unusual actually,” Solomon says. “Getting into trouble on a weekly basis, that’s usually a sign that you need to get an evaluation and find out what’s going on.”

But parents should know it’s not their fault.

“I think that needs to be said,” Solomon explains. “There are many children who are impulsive, who are quick to anger, who have severe impulse control problems, who have easy frustrations. These are children who often misbehave despite good parenting.”

Understanding the meaning of behavior is also key.

“Misbehavior is an immature expression of a valid feeling,” Solomon emphasizes. “‘I’m sad, I’m anxious, I’m disappointed.’ What they do is instead of expressing that feeling in a mature way … (is that) they express it in an immature way through misbehavior.”

“Don’t give children what they want for misbehavior. That just always makes it worse,” he says. He also suggests ignoring certain “ugly” behaviors like arguments between siblings over a toy.

“The more you pay attention to that behavior, the more it’s likely to happen,” he says. “You’re much better off playing with your child and giving your child attention for good behavior.”

If children continue to struggle with severe behaviors after trying what Solomon calls a “rules, reasons and consequences approach,” other options such as medication may be considered.

The outlook is positive for children with behavioral challenges – both in effective treatment options and in society’s increasing mental health awareness.

“The vast majority of children want to behave themselves. They don’t feel good about being out of control. The vast majority of children, when you solve the root causes, will improve in their behavior,” he says. “I think the ones who don’t are suffering significant trauma, abuse, neglect, stress or severe brain-based conditions like autism, severe anxiety, etc. And for those children, you really need specialty care.”

More work is needed to decrease the stigma associated with mental disabilities in children, especially when it comes to kids with behavior issues, Solomon says. “There’s no question that these are children who are very quickly labeled.”

Every child will eventually experience pet loss, but parents can help them cope with their grief. Here’s some expert advice from the Humane Society of Huron Valley.
Read more
Outdoors