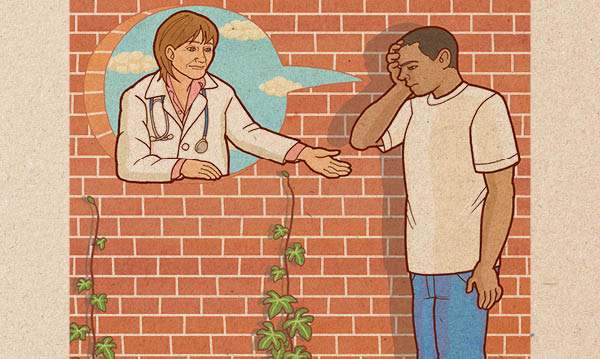 Who do you call for help when you’re not supposed to say you have a problem?

It’s a cycle that’s tough to break – and one that can have dire implications when people with mental illness feel too ashamed to seek out treatment.

“The consequences are all around us of people not getting the help that they need,” says Andrea Cole, executive director and CEO of the Ethel and James Flinn Foundation, which works to improve mental health services in Michigan. “Just like a physical illness, if it gets diagnosed it’s easier to treat and manage. When it gets worse, it’s now a chronic illness and it’s debilitating.”

About one in five Americans experience a mental illness in a given year, but research has shown that some people – often those in ethnic and racial minorities – face greater barriers to diagnosis and treatment than others.

African-Americans, for example, are 20 percent more likely to experience serious mental health issues. Yet research shows they often exclusively rely on faith or family for emotional support rather than health care professionals, according to the National Alliance on Mental Illness.

“Faith is important,” Cole says, “but you also need to understand that it’s a medical condition, so getting help and support is also important.”

Barriers related to mental health stigma can also exist in other communities of color, among veterans or athletes and in various faiths. But prayer, for example, “doesn’t take the place of medical attention and treatment,” Cole says. “It’s not either/or.”

Being raised with a bias against recognizing and treating mental illness also means you might be less likely to notice the signs of a problem in others. Looking back on her childhood, Cole says she realizes now that certain relatives may have had mental illnesses that went undiagnosed.

So how can people break free of those barriers? Education, awareness and early intervention are key – on the broader scale through outreach and a more integrated health care system, including mental health screenings by primary care doctors.

“We need to talk about it. We need to know how to support our friends and family. We need to know what some of the warning signs are, so we can get help for our friends and family or even if it’s us,” Cole explains. “If we have a better understanding of what mental illness is, what the warning signs are, what we can do to treat it, then people are more likely to help their loved ones come forward.”

Knowing where to get support outside of your immediate family and community is also important, especially when cultural barriers are involved. Young people should know whom they can ask for help, such as a school counselor or college resident advisor.

“Someone in your life that’s supportive and that you feel comfortable with that you can go to,” Cole suggests. “Sometimes the reality is that the family may be a hard barrier … so I think that’s why the broader community education is important. Our teachers, counselors, coaches – there are so many other people that can see signs and offer you support beyond your family.”

When depression or anxiety goes untreated, people often turn to self-medication through drugs or alcohol.

“People end up having substance use problems, their symptoms get worse to the point where it impacts their everyday life – their ability to focus, they can’t work, they can’t be in a successful relationship,” Cole says.

There’s also the possibility of suicide, which was the second leading cause of death among ages 10-34 in 2014, according to the Centers for Disease Control and Prevention.

“We see that especially in young people,” Cole says. “If you’re at a point where you consider suicide, you really feel like you don’t have any options and no one can help you. We really have to do something about that.”

The focus needs to change from the issue of people not getting help to the reasons why they don’t get help – and tackling those.

“They don’t want to be treated differently. They’re more afraid of what will happen after they get help,” Cole says. “The fact that you’ve got to be afraid is a problem.”

Change can start at home with regular conversations about mental health.

“We’re just going to keep pushing until we normalize conversations. We just shouldn’t be afraid to talk about these things,” she says. “We’ve got to get past this being a taboo discussion.