Is that cough ‘normal’? Is this fever too high? Find out what a Beaumont pediatrician says all parents should know this cold and flu season. 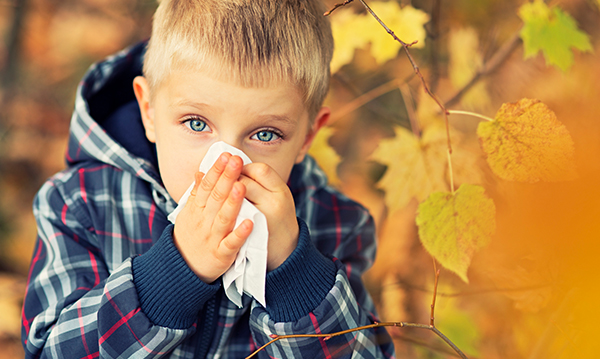 It’s the season of second-guessing.

For parents everywhere, the return of cold and flu season often means lots of questions. Does that cough sound OK? Is this fever too high? Should we head to urgent care or wait it out?

Even experienced moms and dads can feel unsure when their kids are sick. With cases of influenza already detected in southeast Michigan this fall and plenty of other viruses circulating now that kids are back in school, how can parents know whether or not to worry?

Dr. Maureen Anderson, a pediatrician who oversees the Beaumont Children’s Pediatric After-Hours Clinic at Beaumont Hospital, Troy, suggests this rule of thumb: “I think you trust your instincts on if your child is not acting right or you have some concern,” she says.

Beyond that, here’s a look at some of the most common questions parents have during cold and flu season along with the answers.

Parents are often told that difficulty breathing is one of the “red flag” signs to watch for when kids are sick. But how can you tell if it’s happening?

“Either they’re breathing quickly or they’re working hard to breathe,” Dr. Anderson explains. “The area between the ribs gets sucked in or up. They’re really using their muscles to breathe.”

Interference with feeding, especially in infants, is another sign.

“They won’t feed as well because they have to choose between feeding and breathing,” she says.

2. Does this cough mean something?

You’ve probably heard about various types of coughs, whether “barking,” “croupy” or “whooping.” So what kind does your child have – and is it dangerous?

Look beyond just how the cough itself sounds, Dr. Anderson recommends.

“Part of it is how the child looks and sounds,” she says. In general, you should be more concerned “if they have had a cough for a prolonged period of time, meaning a couple weeks; if they have cough with difficulty breathing; or if they develop a cough after they’ve exercised.”

3. Should my child be seen?

It can be difficult for parents to decide whether or not their child should be seen by a doctor – and if so, whether to head to the emergency room, visit an urgent care or after-hours clinic or wait for an appointment with the pediatrician.

If your child isn’t eating, drinking or playing or if he seems to be in pain, it’s probably time to be seen. The on-call doctor at your pediatrician’s office can usually help you decide, too.

If you do bring your child in, keep in mind that not all after-hours clinics are created equally.

“Beaumont’s pediatric after-hours clinics are staffed by pediatricians, so these are people who are very comfortable with all ages and even those young infants,” Dr. Anderson adds. “You don’t always find that in an urgent care setting.

Beaumont Children’s has a pediatric after-hours clinic at Beaumont Hospital, Royal Oak in addition to the Troy location. The clinics have the added benefit of being located in close proximity to Beaumont emergency rooms. Beaumont also has urgent care clinics in West Bloomfield and Redford.

For starters, parents should know that a temperature is only considered a fever in pediatrics if it’s 100.4 or higher. Fevers don’t always need treatment, either.

“Fever is the body’s response to actually help to fight infection,” Dr. Anderson emphasizes. “It’s not something that has to be banished.”

And when a fever creeps higher than you’d expect?

“Infants under 2 or 3 months of age with fever all need to be checked by a medical professional,” she says. “An older child can tolerate a higher temperature. If it’s higher than 104, then they should also be checked.”

Children should also be seen if they have a fever in conjunction with difficulty urinating or difficulty breathing, or in children who have a history of seizures.

5. Does my child need to be tested for the flu or anything else?

Wondering what the doctor might test for when you bring your child to an after-hours clinic? It depends on your child’s age and symptoms, Dr. Anderson says, but tests for influenza, strep throat, respiratory syncytial virus (RSV) and more could be involved.

“Strep is a big one because it’s so contagious,” she says. And with the flu, “treating it sooner is more helpful,” so your child will probably be tested if flu symptoms are present.

6. Why didn’t the doctor prescribe anything?

The use of antibiotics has gradually decreased over the years in response to growing scientific research. Plus, many illnesses are viral and won’t respond to antibiotics.

7. Which symptoms are the most concerning?

Some of the more pressing symptoms that warrant medical attention include dehydration (look for signs like dry mouth and decreased urination), or a cough that’s been going on for more than two weeks.

Your child’s immunization status also plays a role, especially with the rise of vaccine-preventable diseases like pertussis.

“If the child isn’t immunized, [parents] should be even more cautious and have a lower threshold to be seen for evaluation,” Dr. Anderson says.

For more information on Beaumont’s after-hours clinics or to find a Beaumont doctor, visit beaumont.org/childrens.