Concussions and Kids: What Parents Need to Know 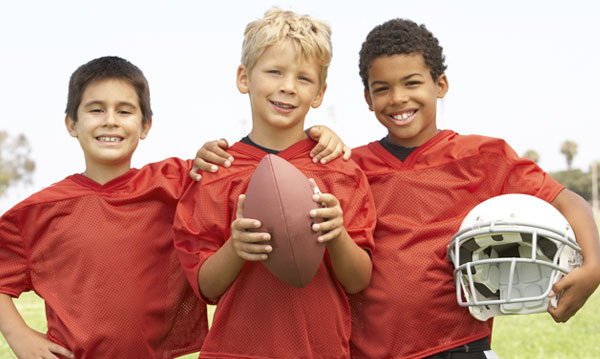 Along with cool weather and falling leaves, football season is arguably one of the most recognizable signs of autumn’s arrival.

But with football – and other sports that ramp up in the fall and continue through the year – there’s a risk of young athletes getting a concussion, a type of traumatic brain injury due to a collision or bump to the head. Dr. Steven Ham, chief of neurosurgery at Children’s Hospital of Michigan, shares advice on recognizing concussions, treating and preventing them – and why they need to be taken very seriously.

While Ham calls out incidents in football, soccer, wrestling and cheerleading as top causes of sports-related concussions, they can occur in any sport, he emphasizes. They could even occur due to a fall or a collision with an object, the American Academy of Pediatrics’ HealthyChildren.org notes.

While the injured person may be knocked unconscious, this is not always the case with concussions. “You do not have to have loss of consciousness for a concussion,” Ham says.

After a collision or injury, Ham says common symptoms to look for include: “Headache, nausea, maybe some disorientation, not feeling your usual self – they look like they’re sort of dazed, not answering questions appropriately.” Are they confused, and not sure where they are or what occurred?

Other signs a child might report include blurry vision, or sensitivity to light or noise, the Centers for Disease Control and Prevention reports. Parents might notice clumsiness, forgetfulness, slow speech, or personality and behavioral changes.

Don’t count on seeing signs immediately following an injury. “Some of these things might take a while to develop,” Ham says – maybe even over a few hours.

When you take your injured child to the hospital for a possible concussion, the No. 1 concern will be, “to make sure there isn’t any bleeding,” Ham says. “A bruise to the brain or bleeding inside the brain, or hematoma or blood clot that’s forming on the surface of the brain – all of these things can be treated and timing is very important.”

Many times the visit will be “simply clinical,” he notes, explaining the presentation of the patient and report of headache will be main factors, and a neurological exam can be done to check brain function. “Many times we have to do a scan,” Ham adds, which will likely be a CAT scan. If there are still issues after a week or two, doctors may do an MRI.

Your child may also need a neuropsychological evaluation to ensure he is not dealing with deficits in memory, interpretation or judgments. At Children’s Hospital of Michigan, a special concussion clinic brings together the neurology, neurosurgery, neuropsychological and physical medicine teams to evaluate and treat concussions, as well as support patients in any therapy and rehabilitation needs.

Following this type of traumatic brain injury, it’s important to remember children “should not return to play until they are cleared by a physician,” Ham says. Doctors will follow a protocol to evaluate whether the child is ready to participate in activities again. With concussions, each is additive. If it occurs again, “Their symptoms can be great, (and) it takes them longer to recover.”

As for preventing concussions, it’s all about playing it safe. Wear protective equipment, such as a helmet, follow the coach’s instructions, and wear seatbelts in the car, Ham says. Parents should keep an eye on their children while the kids are at play.

Brought to you by Gateway Pediatric Therapy
Read more
At Home

Growing up is a beast! We've rounded up some lessons and activities to try with kids after watching Turning Red.
Read more
Tweens & Teens

It's totally natural but can be an uncomfortable thing to address with your son. A local expert offers advice on how to handle boys' wet dreams.
Read more
Travel

Are you looking to get away with your family or spouse? Check out the all-inclusive resorts in Michigan for some family fun or alone time with your significant other.
Read more