Creating a Soft Landing for Your Child's Playset 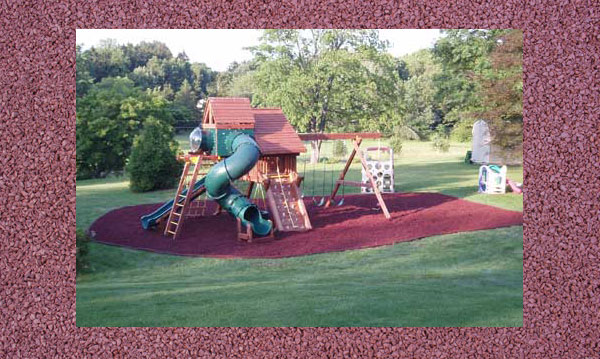 In installing a backyard playset, families often wonder whether a resilient play surface (wood mulch, pea gravel, sand or rubber mulch for example) is something they should consider. Dave Byrum, owner of New Hudson- and Utica-based Kids Gotta Play, says that in Michigan, the majority of the residential playsets his team installs go right on to the grass.

“In Michigan, we’ve got good, soft soil,” he says.

But for those families interested in a resilient play surface, Byrum maintains that rubber mulch is one popular way to go.

“It never has to be maintained,” Byrum explains. “It doesn’t decompose. Wood mulch, on the other hand, does what Mother Nature intended it to do and decomposes into dirt over time.”

Byrum notes that while some families opt to lay rubber mulch around their entire playset, some families choose to install it only under areas where something dynamic is going on.

“That could be under swings or a slide for example,” he says. “Everyone wants kids to be safe, so about four inches of rubber mulch provides extra cushioning in those areas.”

Because of its durability, rubber mulch will last as long as the playset remains in a family’s yard.

“With rubber mulch, you never need to restock it,” Byrum says. “When the kids are grown and maybe you don’t need your playset anymore, you can rake up the rubber mulch, advertise it, and lots of people just setting up their playsets would be interested in taking it off your hands.”

Rubber mulch comes in an array of colors and Kids Gotta Play can drop it off in the family driveway and even spread it if desired.

“The play structure goes in first and then we mulch around it,” he says. “We put down landscape fabric to keep the weeds down. Then we lay the rubber mulch on top.”

Byrum says his team can lay the mulch free form or shape it into an oval or other formation. Families debating what kind of resilient surface to lay should consider the foliage in and around their playsets.

“If you have lots of trees and therefore leaves in your yard, go with the wood mulch over rubber,” he says. “It’s really hard to get the leaves out of rubber mulch.”

Another point to consider is neighborhood critters and family pets.

“Sand, for example, is going to attract cats and raccoons,” he says. “And pea gravels tends to make its way into the house. Kids also have a tendency to throw it around, which can be dangerous.”

Plan a unique experience with these date options that will help you celebrate each other this Valentine’s Day.
Read more
Outdoors