Cutting and Self-Harm: What Parents Should Know

Self-injury is often misunderstood. Many parents think it's akin to a suicide attempt or a grab for attention. It's neither, experts say. 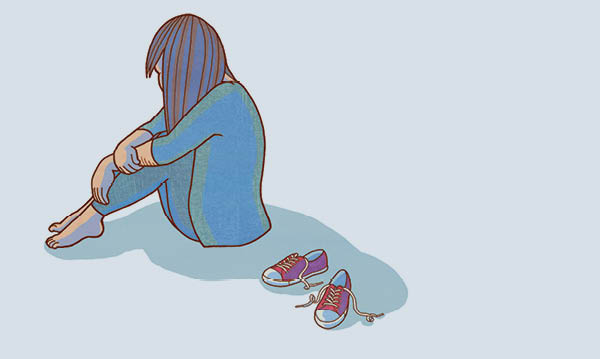 The teenage years are wrought with emotional ups and downs. While parents walk a delicate line between supporting from the sidelines and stepping in to help, they should know that some behaviors are too serious to ignore.

Self-injury, such as cutting, is relatively common among teenagers and young adults and may be on the rise, says child psychiatrist Jeanette Scheid, M.D., who serves as the medical consultant to the Michigan Department of Health and Human Services.

“Self-harm is usually thought of as a number of different behaviors that are on-purpose behaviors to damage the body or body tissues, and usually it’s not in and of itself designed to be deadly,” she says.

A recent study found that one in five U.S. teenagers had practiced self-injurious behavior, Scheid says, and some teens have reported starting as early as 12 years old.

“It’s complicated why kids do this,” she says, pointing out that it can occur when someone is struggling with depression, anxiety, impulse control or emotional regulation problems. “Some kids could do this without those existing mental health problems.”

Self-harm comes with significant risks including infection, serious injuries and even accidental death. Although teens tend to hide marks on their wrists with long sleeves or choose more hidden parts of the body like the upper thighs, parents may notice scars on the child’s body or be alerted to the situation by concerned friends.

If you find out that your child is self-harming, Scheid suggests talking to your teen about it and working with his or her pediatrician to get a referral for mental health services. You could also ask your insurance carrier what resources are available or go directly to a child mental health specialist.

“A parent is really best served by seeking help and making sure that their child has access to a good assessment, so they can think about all of the factors that are connected and they can get the kind of help and treatment that they need,” she says. “It is a red flag that really should raise some degree of alarm.”

Kevin Fischer, executive director of the Michigan chapter of the National Alliance on Mental Illness, says self-harm is a sign of emotional distress and can happen when a young person is “trying to maintain some sort of control over an emotional problem that they’re having.”

“Parents tend to mistake self-harm like cutting as attempted suicide and they are typically not that,” he says. “They are typically superficial cuts that are not life-threatening, but they cause enough pain where that person feels that they’re getting some control over some kind of psychological issue.”

But parents can sometimes overlook the serious nature of self-harm because they believe it may be an attention-seeking behavior. Fischer cautions parents against this assumption.

“It’s often mistaken for a suicide attempt or sometimes it’s underestimated as a superficial cry for help,” he says. “It should not be mistaken in either regard.”

Self-harm should be taken seriously regardless of the perceived reason for the behavior, Fischer says.

“You never want to ignore what appears to be a cry for help,” he says. “Just as if you felt a lump, you wouldn’t ignore it and say, ‘I don’t want to know if it’s breast cancer.'”

It’s crucial to find out why the child is self-harming and treat any potential underlying psychological disorders. This is something Fischer knows from personal experience.

“I lost my son to suicide five years ago. Being a parent who didn’t know and having to live with the question for the rest of your life is not worth the fear of addressing it,” Fischer says.

Scheid encourages parents to maintain an open dialogue with their children about mental health and the importance of caring for their bodies.

“One of the first things you can do – starting when kids are little and certainly expanding that when they reach those pre-teen years – is talk about healthy habits, talk with them about the importance of taking care of their body,” she says. “Their skin is a really vital organ of the body that helps protect against bigger medical problems.”

Also try to foster an environment of openness in your home where your teen feels comfortable sharing his or her emotions and struggles.

“Because oftentimes this is part of a bigger mental health problem or a signal that the youngster is having some emotional distress, try to develop a family culture where kids feel free to talk about things that are bothering them,” Scheid says. “That would be really important as sort of a prevention.”