Explore Space This Summer at the Michigan Science Center 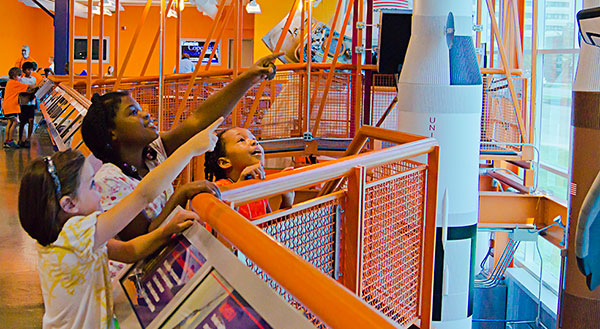 Most kids (and OK, most adults) are fascinated with space. The idea of a vast expanse filled with mysterious whirling orbs has captivated our attention for millennia. And the Michigan Science Center’s Dassault Systèmes Planetarium aims to stoke that curiosity with its programming.

On June 13, the film Journey to Space will open at the Chrysler IMAX® Dome Theatre at the Michigan Science Center. It depicts NASA’s accomplishments in space exploration and preparations for the next awe-inspiring goal: a manned mission to Mars. The planetarium staff is planning programming to coincide with the topics of the film, says Paulette Auchtung, planetarium coordinator and staff astronomer. “I’m pretty excited because right now, the U.S. doesn’t have a shuttle program, so kids don’t get to grow up and say ‘Hey, I want to be an astronaut,'” she says. “It’s nice to give them something else to strive for – instead of being a shuttle astronaut, they could be the first person on Mars.”

Four times a year, the planetarium changes its depiction of the night sky, just as it changes outdoors each season. This helps visitors know what they are seeing when they step outside and look up.

Planetarium presenters show what is easily visible in the Metro area because of the effects of light pollution, and then demonstrate how many more stars you can see when you travel to less populated areas. They relate what you see at the planetarium to what’s in the night sky and share new information. “We inspire minds of all ages, no matter how old or how young,” says Auchtung

Each show is tailored to the audience; a preschool group might get a simple explanation of the planets while a group of adults might get a glimpse of higher level astronomy. The central theme is to help people understand the universe of which we are one tiny part. “Our talented presenters encourage audience participation and ensure that each show is unique,” Auchtung says.

Pair the popular planetarium show, What’s Up? Your Guide to the Night Sky, with Journey to Space this summer and save. You’ll discover space from here on earth, and get a glimpse into the future of space travel.